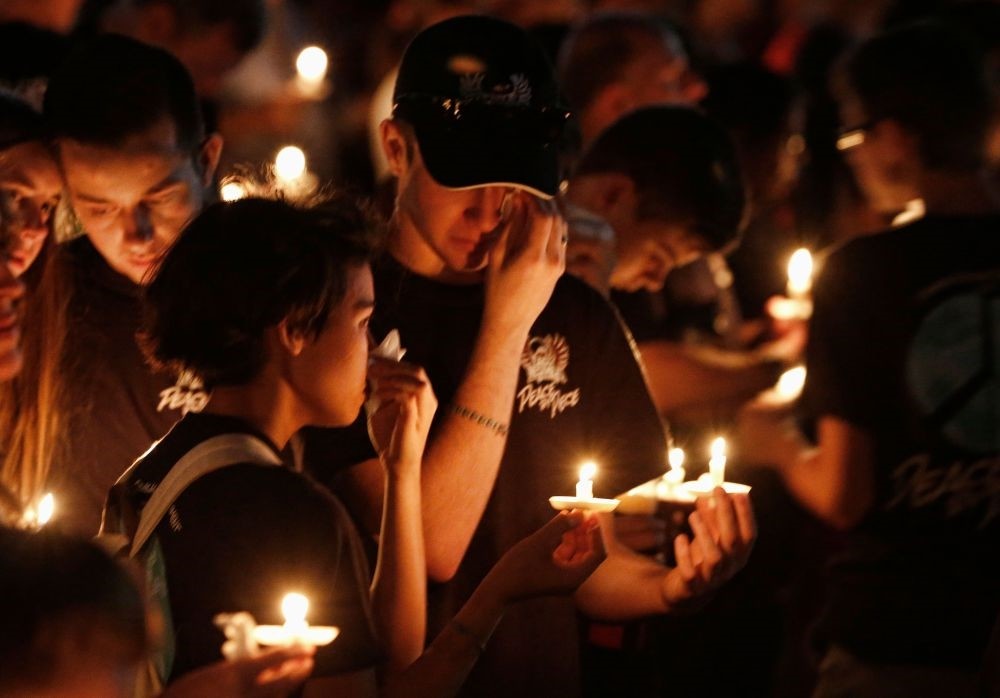 Thousands of mourners hold candles at a vigil for victims at the Marjory Stoneman Douglas High School, Parkland, Florida, Feb. 15, 2018.
by Angelos Berberakis Feb 16, 2019 12:04 am

It has been reported that in 2018, some 1,200 minors died as a result of gun-related homicides as well as accidents.

Notably, 2018 also marked a significant year in anti-gun violence protests after the Feb. 14 Parkland school shooting in Florida, which resulted in a total of 17 deaths, adults included, and an additional 17 injuries sustained by both minors and adults.

The event sparked several anti-gun protests that culminated in anti-gun movements, most calling for heavy restrictions on ownership, while others proposed a total ban.

By then, not only due to their shocking nature but also due to their increasingly political nature, school shootings had become a "norm" in the American media news cycle; so much so that the calls for the govern

ment to take action seemed to grow louder and louder.

At the time, President Donald Trump was also forced to get involved with the issue, and there were several proposals that came his way as well as some that were made by him. One activist group had suggested that plastic, transparent school bags be made a legal requirement for all

schools. Others talked about metal detectors and the like. Trump talked of increased on-campus security and also proposed the possibility of providing "concealed guns to gun adept teachers with military or special training experience – only the best."

This proposal by the president was met with a barrage of negative response from most media outlets, prompting him to explain his reasoning further.

"History shows that a school shooting lasts, on average, 3 minutes. It takes police and first responders approximately 5 to 8 minutes to get to the site of the crime," Trump tweeted. This holds true for most cases of intentional gun-related violence.

He also argued that highly trained, mentally sound and gun-adept teachers and coaches would not just serve as protection during a potential shooting but also act as "great deterrent[s]" against them.

The renewed gun control debacle was again in full swing, and this time Trump, who has a reputation for not going easy on what he perceives to be media misrepresentation, was also fully involved. Later shootings would also prompt the president to propose total bans on various weapon attachments such as bump-stocks, which in theory help increase one's ability to fire a weapon accurately for long-range targets as well as help increase fire rates.

This had already been an issue since the Oct. 1, 2017 Las Vegas country music fair. The 64-year-old shooter, Stephen Paddock, opened fire at concertgoers from his hotel suite on the 32nd floor of the Mandalay Bay hotel and managed to kill 58 and injure over 400 from the remarkable distance of 450 meters. His motives were never determined, and theories range from political or religious terrorism to mere insanity.

While these events are unquestionably tragic, their statistical breakdown helps shed some light that might not necessarily be presented via mainstream outlets.

As an example, nearly 1,200 minors lost their lives to guns in the previous year as was stated before; however, of these, just 43 were the result of school shootings specifically, and three of them were the underage perpetrators themselves. The rest of these 1,200 lost their lives in gun-related accidents and even suicides.

Suicides, while not generating nearly as many headlines as school shootings, in fact make up nearly 60 percent of all gun-related deaths.

A further 37.2 percent of deaths are the result of homicides, the overwhelming majority of which do not stem from one-on-one vendettas or crazed killers, but inner city gang wars.

Chicago specifically has one of the highest, if not the highest, murder rate in the entire country; yet, the state of Illinois, which Chicago is part of, has some of the strictest gun laws of any state.

There is no conclusive evidence that more gun control increases gun crime; however there's no evidence on whether more guns means less gun crime either.

What we do know is that national trends in violent crime peaked in the 1990s and have dropping ever since, while gun carry laws were relaxed and firearm ownership increased.

While gun control advocates point to the 1994 Federal Assault Weapons Ban as the reason, Second Amendment supporters point to high court cases such as Columbia vs. Heller in 2008 and McDonald vs. Chicago in 2010 to argue that gun crime has continued to decline due to their effects, which were that the Second Amendment protects an individual's right to possess a firearm even if they are unconnected with service in the military or otherwise and that it also applies to all governments on the state, local and federal level respectively.