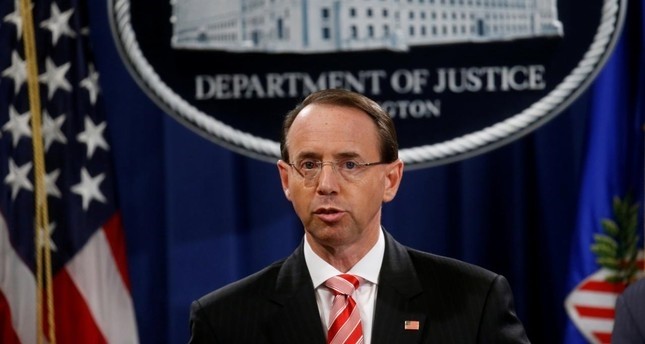 "Rod raised the issue and discussed it with me in the context of thinking about how many other cabinet officials might support such an effort," McCabe told CBS's "60 Minutes" news show.

A clip of that part of the interview was run early Sunday on CBS's "Face the Nation" show, the first time McCabe's actual comments on the explosive subject have been aired.

Rosenstein has dismissed reports that he discussed removing Trump from office -- and even pondered wearing a wire to secretly record his conversations with the president -- as a "joke," if indeed he made the comments.

In the interview, McCabe was asked whether Rosenstein seemed intent on "getting rid of the president of the United States one way or another."

"I can't confirm that," he said. "But what I can say is the deputy attorney general was definitely very concerned about the president, about his capacity and about his intent at that point in time."

The president abruptly fired Comey amid tensions over the FBI's investigation into possible links between Trump's 2016 campaign and a covert Russian effort to sway the U.S. election in his favor.

Comey has said that Trump had been pressuring him to publicly declare that he was not a subject of the investigation.

The firing set off alarm bells at the FBI, and McCabe told CBS he scrambled to ensure that the Russia probe was on "absolutely solid ground" so it could not easily be shelved.

He told CBS he did not remember how the 25th Amendment came up in the discussion with Rosenstein.

"It was just another kind of topic that he jumped to in the midst of a wide-ranging conversation," he said.

The 25th Amendment sets out a process for the replacement of the president in the event of death, removal, resignation or incapacitation.

McCabe himself was fired in March 2018 for "lack of candor" in an internal investigation into the FBI's handling of a 2016 probe into Trump's Democratic rival Hillary Clinton.