Pence, Pompeo up US pressure on Venezuela’s Maduro 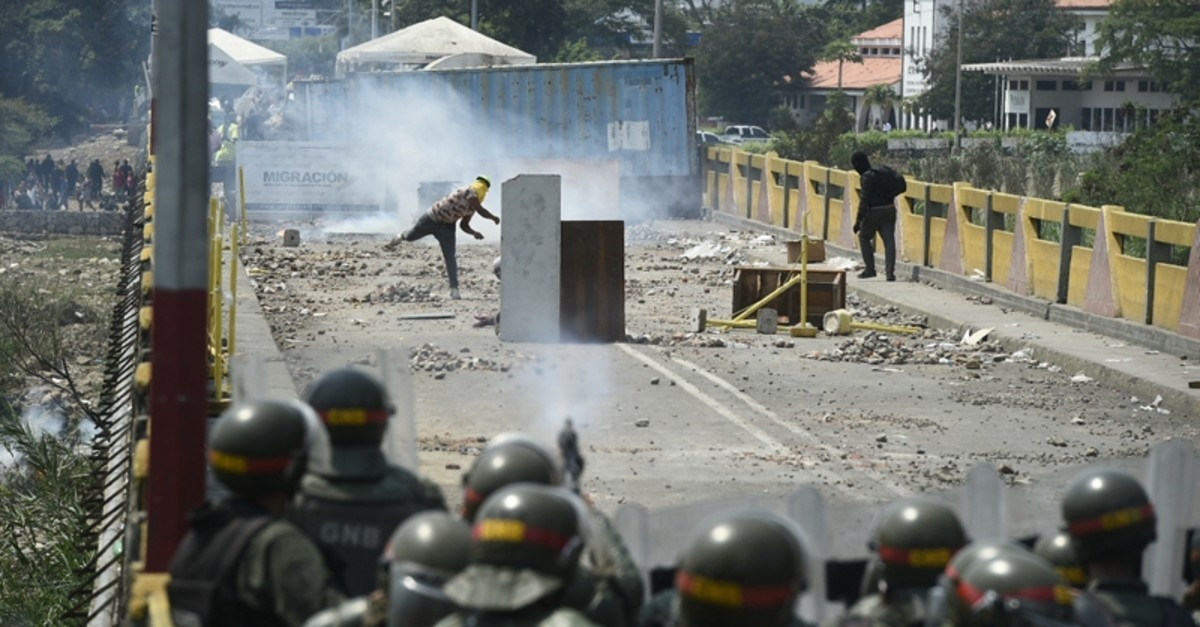 U.S. administration increased its pressure and threats on Venezuelan President Nicolas Maduro after Caracas blocked the entrance of American aid aimed in support of the self-styled President Juan Guaido into the country.

Vice President Mike Pence is set to announce "concrete steps" and "clear actions" to address the Venezuela crisis when he meets on Monday with regional leaders in Bogota, Colombia, a senior U.S. administration official said, declining to comment on details of the new measures.

"What happened yesterday is not going to deter us from getting humanitarian aid into Venezuela," the official said on Sunday, speaking with reporters on condition of anonymity.

Guaido said late Saturday in Cucuta that he planned to meet Pence on Monday at a meeting in Bogota of 11 Latin American foreign ministers of the Lima Group.

Secretary of State Mike Pompeo on Sunday also lashed out at Maduro, saying his administration's "days are numbered."

"We're very hopeful in the days and weeks and months ahead the Maduro regime will understand that the Venezuelan people have made its days numbered," Pompeo told in an interview with Fox News on Sunday.

On Saturday, convoys of U.S. aid were blocked from getting into Venezuela, met with violence from forces and groups allied with Maduro. At least four people were killed and 200 others injured during anti-government protests in the country. Fifty-one people were also arrested as they clashed with security forces at the Colombian border.

Protesters were calling for the government to open borders and allow the U.S. humanitarian aid into the South American country.

"I think the Venezuelan people are seeing that. We saw yesterday the military begin to see it as well," he added.

Asked if a military force will be used against Maduro, Pompeo said every option is on the table.

"We are going to do the things that need to be done to make sure that the Venezuelan people's voice, that democracy reigns and that there is a brighter future for the people of Venezuela," Pompeo added.

Venezuela has been rocked by protests since Jan. 10, when Maduro was sworn in for a second term following a vote boycotted by the opposition. He has presided over a massive economic crisis, with annual inflation running at millions of percent, while more than three million Venezuelans have fled abroad.

Tensions escalated when Guaido, who heads Venezuela's National Assembly, declared himself acting president Jan. 23, a move which was supported by the U.S. and many European and Latin American countries.

Turkey, Russia, Iran, Cuba, China, and Bolivia reiterate support for Maduro, who vowed to cut all diplomatic and political ties with the U.S. following the diplomatic spat.

However, two of Venezuela's strongest neighbors also sided with opposition and called for Maduro's ouster.

"Brazil calls on the international community, especially those countries that have not yet recognized Juan Guaido as interim president, to join in the liberation effort of Venezuela," the Brazilian Foreign Ministry said in a statement.

Brazil, a diplomatic heavyweight in Latin America which has the region's largest economy, was for years a vocal ally of Venezuela while it was ruled by the leftist Workers Party. It turned sharply against Maduro this year when far-right President Jair Bolsonaro took office.

Clashes were also reported in northern Brazilian state of Roraima bordering Venezuela, with unconfirmed reports pointing to at least a dozen dead.

Meanwhile, Colombian President Ivan Duque, in a tweet, denounced the "barbarity and violence" and said Monday's summit would discuss "how to tighten the diplomatic siege of the dictatorship in Venezuela."

Duque visited the Simon Bolivar Bridge near the border city of Cucuta on Sunday, speaking with Venezuelans on the border seeking news about long-awaited humanitarian aid.

The move came on the order of Colombia's Foreign Ministry after Maduro announced a rupture of Venezuela's diplomatic relations with Colombia and gave the country's diplomats 24 hours to leave.

Colombia has closed all border crossings with Venezuela for 48 hours, with border authorities saying Saturday that clashes between protesters and Venuzuelan border forces had caused damage that needed to be repaired.

The border closing, effective until Tuesday, will initially prevent supporters of Guaido from transporting humanitarian aid stored in Cucuta over the border into Venezuela.

Maduro closed the border from the Venezuelan side on Friday.

Venezuela's Information Minister Jorge Rodriguez, during a Sunday news conference, gloated about the opposition's failure to bring in aid and called Guaido "a puppet and a used condom." Maduro has denounced Guaido for seeking to foment a U.S-orchestrated coup.

The EU's top diplomat has called on Maduro to allow convoys of trucks carrying food and medical supplies into the country.

"The refusal of the regime to recognize the humanitarian emergency is leading to an escalation of tensions," Federica Mogherini said in a statement on Sunday.

"We strongly call on law enforcement and security bodies to show restraint, avoid use of force and allow for the entry of aid," Mogherini said on behalf of the European Union's 28 member states.

Many European capitals recognize Guaido as interim president. The EU is urging Maduro to hold free and fair elections as soon as possible.