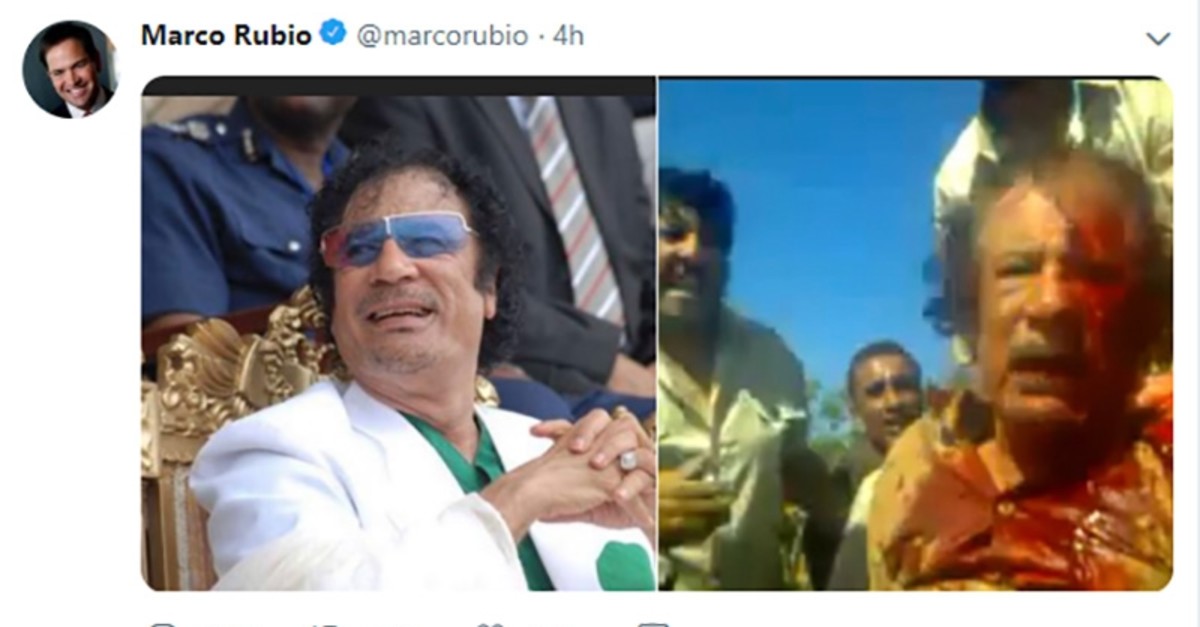 Without adding any text, Rubio shared two photos of Gadhafi, the first of him in power and the second of him being violently lynched in the streets in 2011.

The images were apparently meant for Maduro, coming hours after Secretary of State Mike Pompeo said the Venezuelan administration's "days are numbered," suggesting that the people would depose their elected leader.

Rubio's last tweet before the Gaddafi photos featured headlines from around the world condemning Maduro, shared with the hashtag "#MaduroCrimeFamily."

Rubio, a Florida senator of Cuban descent, has been an influential figure on Venezuela policy in Washington, and one of the loudest voice supporting Venezuelan opposition leader Juan Guaido, who declared himself interim leader of the country last month. His electorate mainly consisted of Cuban and other Latin American emigres with strong resentment towards socialist governments, and Rubio is known for his hawkish stance against Havana, one of Maduro's key allies.

Gadhafi's brutal ouster has not been followed by peace or stability in Libya, but some U.S. politicians, including Rubio, considered the operation a success.

"We came, we saw, he died," then-Secretary of State Hillary Clinton said of Gaddafi's demise.

Rubio, at the time, also voiced support for the U.S. intervention in Libya, and apparently, still views it positively. Since then, Libya has been locked in a civil war that killed thousands of people and divided the country between two rival governments in Tripoli and Tobruk, in addition to numerous armed militant groups with some pledging allegiance to Daesh.

A foreign policy adviser for Democratic Sen. Bernie Sanders, Matt Duss, responded to Rubio's tweet Sunday by retorting: "While tweeting this is deeply sick, it does work as an outstanding argument against US-backed regime change."

Other policy experts voiced their distress over the tweet's sentiment, mentioning Iraq and Syria alongside Libya as examples of disastrous U.S. military interventions.

"You really have to be a special breed of warmongering, interventionist loon to think this tweet is a good idea. Or to think Libya, Iraq, Syria etc were good and should be repeated," political strategist Doug Stafford tweeted.