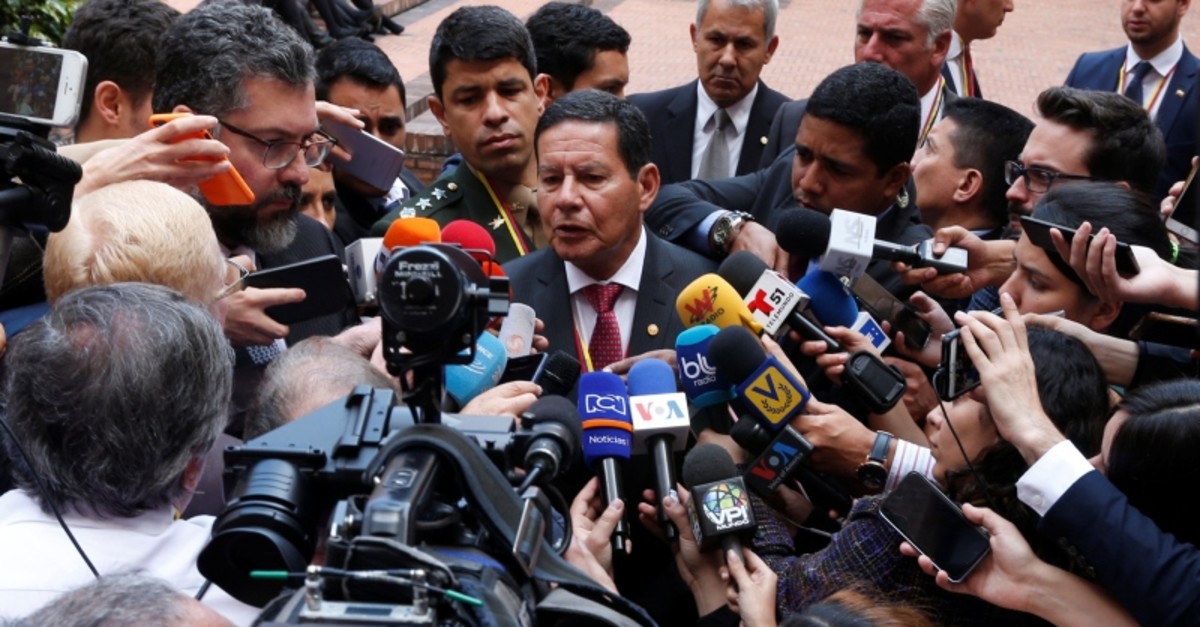 Brazil's Vice President Hamilton Mourao speaks to the media after a meeting of the Lima Group in Bogota, Colombia, February 25, 2019. (Reuters Photo)
by Anadolu Agency Feb 26, 2019 12:00 am

Brazil's vice president said Monday his country will not allow the United States to intervene militarily in Venezuela from Brazilian territory.

Brazil is opposed to any military intervention by the U.S. in Venezuela, said Hamilton Mourao, speaking during a meeting of the Lima Group in Bogota, Colombia.

The group is a bloc of 14 Latin American nations focused on finding a peaceful resolution to Venezuela's longstanding crisis.

During a televised interview in Brazil, Mourao also said his country is working to ensure that the crisis in Venezuela does not turn into an armed conflict in the region.

Brazil's vice president says his nation will maintain its strategy of avoiding military intervention when it comes to neighboring Venezuela.

His comments come a day after U.S. Secretary of State Mike Pompeo lashed out at Venezuelan President Nicolas Maduro, saying time is running out for his administration.

"We're very hopeful in the days and weeks and months ahead the Maduro regime will understand that the Venezuelan people have made its days numbered," Pompeo said in an interview on 'Fox News Sunday'.

In the Bogota summit's statement, the Lima Group called on the International Criminal Court to consider Maduro's refusal to allow in humanitarian aid as a "crime against humanity".

The group condemned Maduro for depriving people of food, medicine and basic needs.

Also, the countries that are still cooperating with Venezuela will be called on to help resolve the political crisis in the country, the statement said.

"The transition to democracy must be conducted peacefully by Venezuelans within the framework of the constitution and international law, supported by political and diplomatic measures, without the use of force," it said.

Mexico did not participate in the meeting despite being in the Lima Group.

At least four people were killed and 200 others injured Saturday during anti-government protests in Venezuela. Fifty-one people were also arrested as they clashed with security forces at the Colombian border.

The protesters were calling for the government to open borders and allow U.S. humanitarian aid into Venezuela.

Asked if military force will be used against Maduro, Pompeo said all options are on the table.

"We are going to do the things that need to be done to make sure that the Venezuelan people's voice [is heard], that democracy reigns and that there is a brighter future for the people of Venezuela," he added.

Venezuela has been rocked by protests since Jan. 10, when Maduro was sworn in for a second term following a vote boycotted by the opposition.

Tensions escalated when Juan Guaido, who heads Venezuela's National Assembly, declared himself acting president on Jan. 23, a move which was supported by the U.S. and many European and Latin American countries.

Turkey, Russia, Iran, Cuba, China and Bolivia reiterated their support for Maduro, who vowed to cut all diplomatic and political ties with the U.S.
Last Update: Feb 26, 2019 11:19 am
RELATED TOPICS