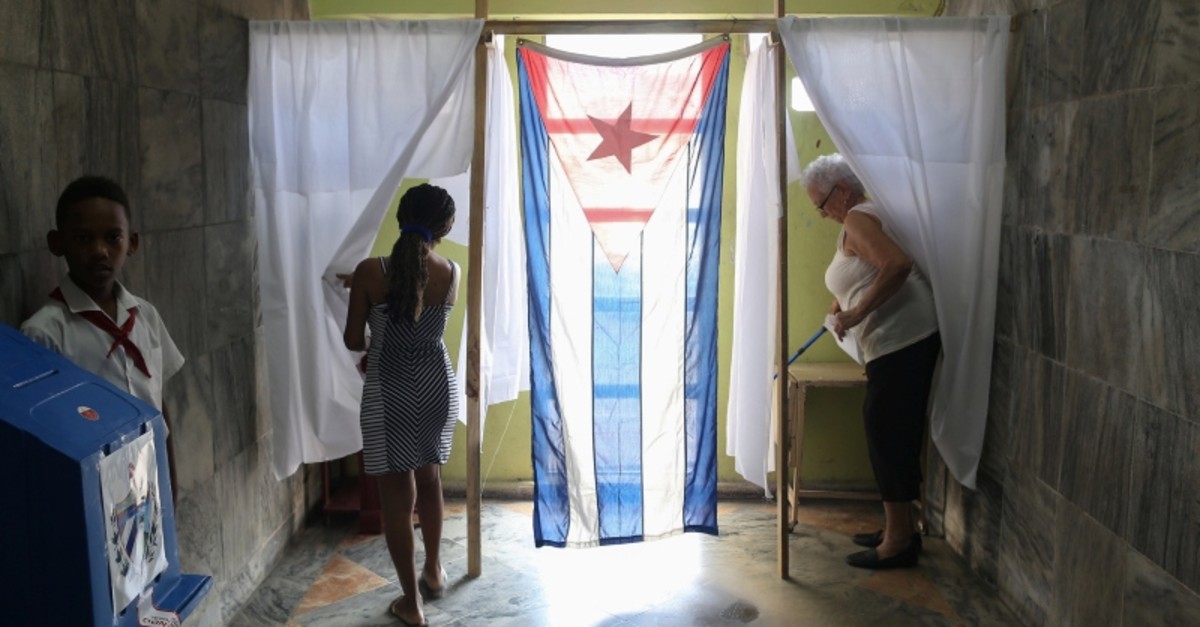 Voters cast their votes at a polling station during a constitutional referendum in Havana, Cuba, Feb. 24, 2019. (Reuters Photo)
by Compiled from Wire Services Feb 26, 2019 10:49 am

Cubans voted overwhelmingly in favor of constitutional reforms that cement the role of socialism in the island nation, the electoral commission said Monday.

Some 6.8 million people, or more than 86 percent of voters, supported the changes in Sunday's referendum, while only 766,400, or 9 percent, voted against.

A total of 7.8 million people took part in the vote, with just over 4 percent of ballots blank or invalid.

"The constitution has been ratified by the majority of citizens," electoral commission president Alina Balseiro told a news conference.

"It's an overwhelming response to the unbelievers who from Washington talked about the end of #Socialism, with policies that failed for more than 60 years.

U.S. President Donald Trump had said earlier this month that the leftist ideology is "dying."

But academic and former diplomat Carlos Alzugaray had told AFP that Trump's words would serve only to galvanize the "yes" vote as people "defend their independence against the U.S. threat."

In recent days, the government's messages were mixed with words of support for Venezuelan President Nicolas Maduro as tensions rise between Cuba's main ally and the Trump administration, along with Latin American allies who support the Venezuelan opposition and its attempt to force aid into the country.

The constitutional reforms ratify socialism's "irrevocable" role as the national ideology and replace the 1976 constitution, a move criticized by the Catholic and evangelical churches.

It also recognized the Communist Party as the "superior ruling political force in society and the State," and its position as the nation's only party.

It has ruled Cuba since 1959, first under revolutionary hero Fidel Castro, then his brother Raul and, since April, Miguel Diaz-Canel.

The reforms do, however, recognize a limited role for the free market and private investment, but only under Communist Party control.

Cuba's outlawed opposition had campaigned hard on social media for a "no" vote.

Normally, it pushes for abstention, but this was a rare opportunity to vote "no" to the one-party communist regime.

The "yes" campaign benefited from omnipresence in the media, which is controlled by the state, as well as in public spaces.

The government only needed a simple majority for the reforms to pass and had portrayed a 'no' vote as unpatriotic.

The text of the reforms had undergone extensive public debate between August and November, with several changes made before the final version was submitted to the referendum.

Before becoming official, the reforms must be proclaimed by the National Assembly, probably during a session in April, and then published by the Official Gazette.

Authorities said more than 84 percent of registered voters cast ballots, but the victory margin was tighter than Cuba is used to.

"The country has changed and it's a different constitution with more complications," Alzugaray said.