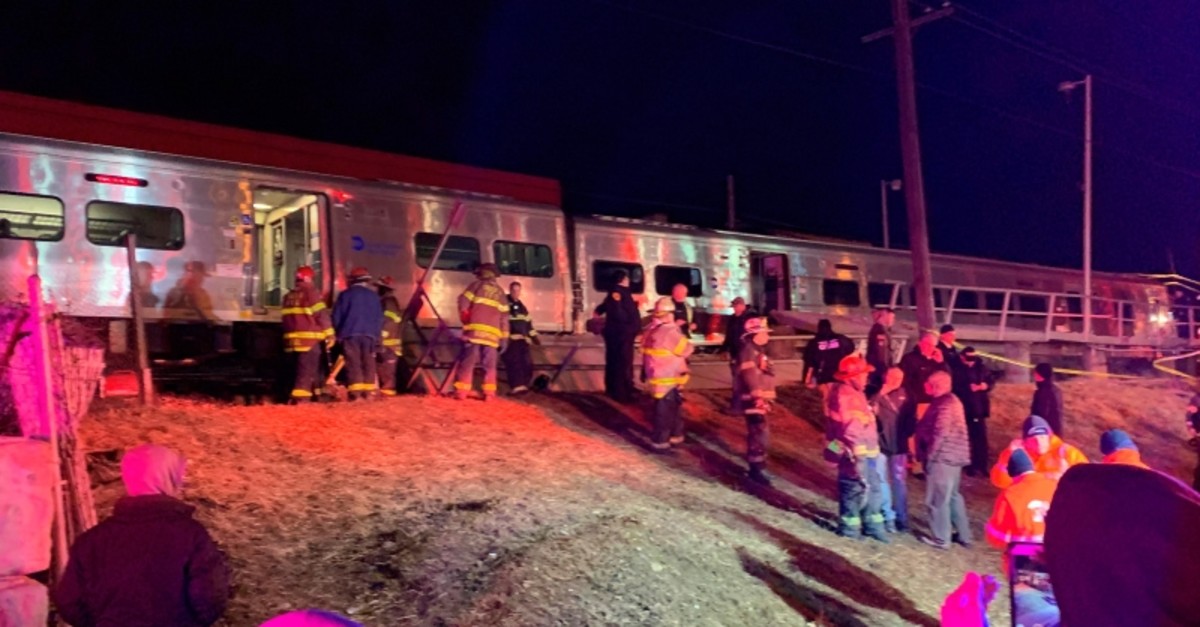 First responders work the scene of a collision involving a Manhattan-bound commuter train and a vehicle in Westbury, N.Y., Tuesday, Feb. 26, 2019 (AP Photo)
by Compiled from Wire Services Feb 27, 2019 8:17 pm

Three people were killed when their car was hit by two different trains as the vehicle was crossing a railway on Long Island, just outside New York.

The car was on a railroad crossing late Tuesday when it was first hit by a train that had just pulled out of nearby Westbury station, before another train heading from the opposite direction also smashed into it.

One of the trains was derailed by the impact and ran into a concrete platform in Westbury station before coming to a halt. Around 900 people were riding on the two trains.

All three people in the car were killed, said Phillip Eng, head of the Long Island Rail Road.

Seven train passengers were injured, as well as a conductor and an engineer, said Eng, who did not say how serious the injuries were.

An initial inquiry suggested that the railroad crossing was functioning properly and that the barriers were down and the lights flashing to warn drivers of approaching trains, Eng said.

The New York Times reported that the driver appeared to have swerved around the barriers to try to make the crossing.

The accident led to extensive delays on the rail network Wednesday.

The railroad said heavy delays are expected as its crews work on two derailed train cars and "significant" track damage, and assess damage to the station platform.

Passenger Kiara Jackson told Newsday she heard the sound of metal dragging along the concrete platform.

"I knew something was wrong. We were in a panic," Jackson said. "There was a screech and then there was a thud. They told us to walk westerly and there were two small fires. Smoke was kind of coming in so they told us to just keep walking."

Another passenger, April Frazier, 31, of Brooklyn, was heading to Manhattan's Penn Station.

"I was sitting on the left side and all of a sudden the train really started rocking hard," Frazier told Newsday. "Flames flared up on my side. I heard the conductor yell 'Brake, brake!' That's when I saw the flames."

Chris O'Neil, chief spokesman for the National Transportation Safety Board, said that the circumstances of the crash, though tragic, don't point to any safety issues that require further investigation or new recommendations by the agency.

Tuesday's crash was the fifth incident at the crossing in 40 years, and the second involving a train hitting a vehicle, according to federal safety data. In the others, a person walking or standing on the tracks was hit by a train.

As part of the LIRR's expansion and modernization project, the railroad's "A Modern LI" website said it planned to eliminate that grade crossing, saying it "poses a safety risk to drivers, pedestrians and LIRR customers," and replace it with a "two-way grade separated underpass."

After a spike in deaths at railroad crossings in 2017, the U.S. Department of Transportation launched a public awareness campaign with the slogan "Stop! Trains Can't." The Federal Railroad Administration developed a crossing-finder app and persuaded technology companies to add grade-crossing warnings to GPS devices and mapping applications.