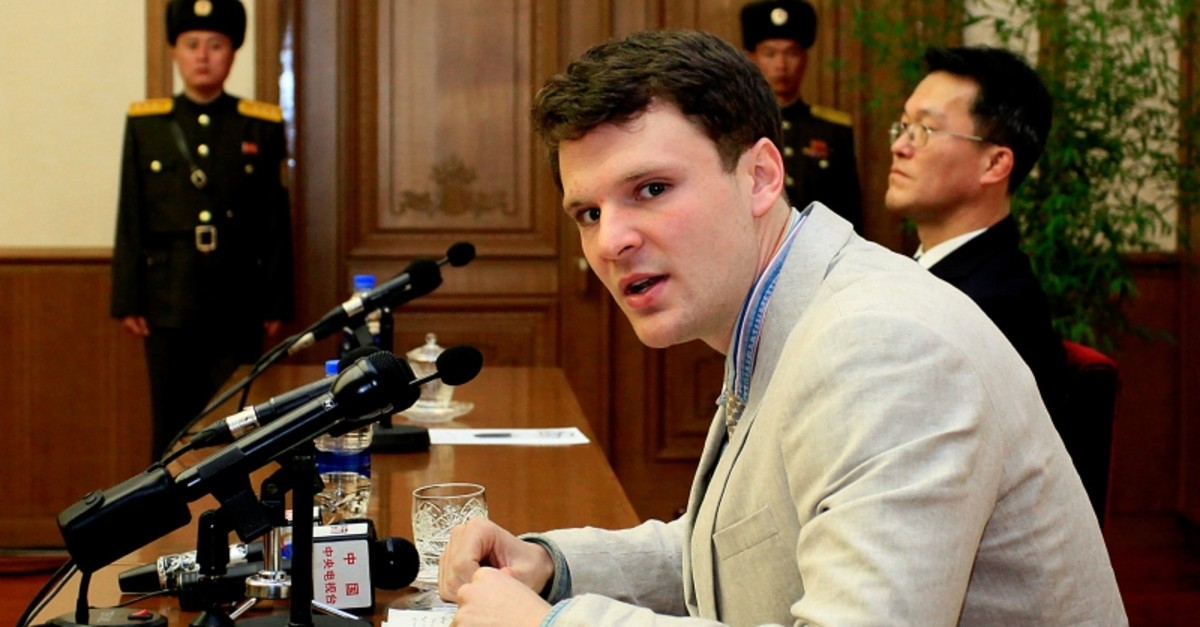 In this Feb. 29, 2016, file photo, American student Otto Warmbier speaks as Warmbier is presented to reporters in Pyongyang, North Korea (AP File Photo)
by Compiled from Wire Services Mar 02, 2019 12:00 am

The parents of the American college student who was sent home from North Korea in a vegetative state spoke out Friday, after Trump's comment this week that he takes Kim Jong Un "at his word" that he was unaware of any mistreatment during the young man's 17 months of captivity. Warmbier died at age 22 soon after his return in June 2017.

Fred and Cindy Warmbier, who have expressed appreciation of Trump in the past and were guests at his 2018 State of the Union address, said in a statement Friday they had been respectfully silent while Trump and Kim met in Vietnam.

But, she said, Trump is saying "there's no indication Chairman Kim knew what happened to Otto Warmbier when it happened."

"Of course I hold North Korea responsible for Otto's mistreatment and death," Trump wrote on Twitter after Warmbier's parents had weighed in on the controversy.

"Most important, Otto Warmbier will not have died in vain. Otto and his family have become a tremendous symbol of strong passion and strength, which will last for many years into the future."

Democratic Sen. Chuck Schumer, of New York, said in a tweet that Trump owes the Warmbiers an apology for "simply deciding to take a cruel and brutal dictator at his word."

Warmbier's parents have accused North Korea of torturing the University of Virginia student, who was detained for allegedly stealing a propaganda poster as he prepared to end a visit to the country with a tour group.

Fred Warmbier described to Fox News in 2017 Otto's condition when he returned: making an "involuntary, inhuman sound," ''staring blankly into space, jerking violently," and was blind and deaf, with his head shaved.

Doctors in Cincinnati said he had suffered severe brain damage, although they weren't sure what led to it. North Korea denied mistreating him, saying he fell into a coma that resulted from botulism and a sleeping pill.

During a news conference Thursday, Trump was asked if he and Kim had discussed Otto and whether he had asked the North Korean leader to take responsibility for what happened to him.

Trump said that "something very bad happened" to Warmbier, but that he didn't believe Kim knew about it or would have allowed it to happen.

"He tells me that he didn't know about it, and I will take him at his word," Trump said.

Some people who have followed the Warmbiers' ordeal were stunned.

"Trump offers Warmbiers a slap in the face," read a headline on a column by Byron McCauley in The Cincinnati Enquirer.

Republican U.S. Sen. Rob Portman, who like the Warmbiers lives in the Cincinnati area, has kept in contact with them since Otto's detention began.

"His treatment at the hands of his captors was unforgivable, and it tells us a lot about the nature of this regime," Portman said Thursday on the Senate floor. "We can't be naive about what they did to Otto, about the brutal nature of the regime that would do this to an American citizen."