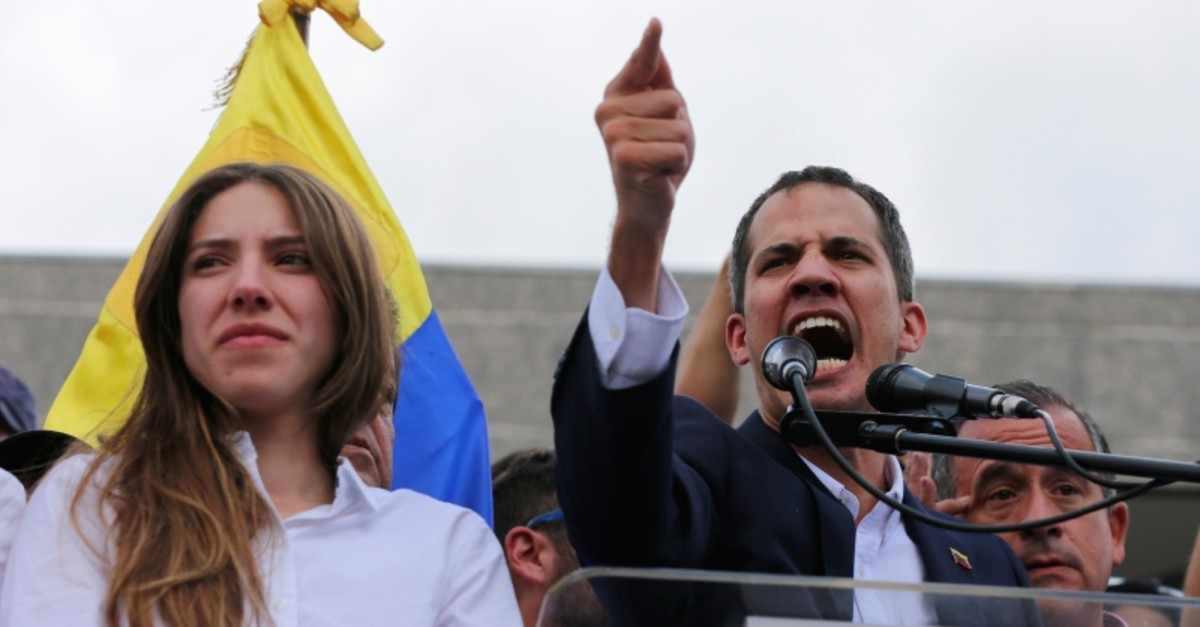 Juan Guaido speaks to supporters at a rally to demand the resignation of Venezuelan President Nicolas Maduro, as his wife Fabiana Rosales next to him in Caracas, Venezuela, March 4, 2019. (AP Photo)
by Compiled from Wire Services Mar 04, 2019 11:07 pm

Venezuela's opposition leader Juan Guaido called for a new demonstration on Saturday to ramp up the pressure on President Nicolas Maduro as he spoke to supporters after defying the threat of arrest to return home on Monday.

"On Saturday we'll continue in the streets, all of Venezuela will return to the streets. We will not rest one second until freedom is achieved," said Guaido, recognized as interim president by more than 50 countries, speaking to thousands of supporters in Caracas.

Guaido came back to Caracas on Monday after more than a week abroad, defying orders banning him from leaving. Guaido went on a multi-nation tour seeking support from neighboring South American countries in his quest to unseat President Nicolas Maduro.

The 35-year-old leader of Venezuela's National Assembly showed off his passport before climbing onto scaffolding and pumping his fist during the demonstration in Caracas, delighting euphoric followers whose efforts to oust Maduro have fallen short in a nation gripped by a humanitarian crisis.

There were few security forces nearby and no immediate comment from Maduro's government.

While thousands of Venezuelans heeded Guaido's call for protests coinciding with his return, many wonder whether he can maintain momentum against a government that, while under extreme pressure itself, has relentlessly cracked down on opponents in the past, jailing or driving into exile top opposition leaders.

"We know the risks that we face. That's never stopped us," Guaido said after arriving at Venezuela's main airport and going through immigration checks. He was greeted by top diplomats from the United States, Germany, Spain and other countries who possibly hoped to head off any move to detain Guaido by bearing witness to his return.

The United States and some 50 other countries have recognized Guaido as the legitimate leader of Venezuela, arguing that Maduro's re-election last year was invalid because popular opposition candidates were barred from running. On the other hand, Turkey, Russia, China, Iran, Mexico, Bolivia and Cuba have chose to stand behind Maduro.

At the demonstration, Guaido called for massive protests on Saturday and said he would meet Tuesday with public employee unions controlled by the government of Maduro, who retains the support of military generals despite the desertion of hundreds of lower-ranking military personnel.

Guaido visited Colombia, Brazil, Paraguay, Argentina and Ecuador over the past week — all countries that support his claim to be Venezuela's interim president and calls on Maduro to resign so that the country can prepare for free and fair elections."

Maduro has said he is the target of a U.S.-backed coup plot after the Trump administration joined dozens of other countries in backing Guaido. The United States has also imposed oil sanctions on Venezuela, which has the world's largest oil reserves.

Venezuela's vice president, Delcy Rodriguez, did not directly address a question about whether Guaido faces arrest during a recent interview with Russian state-owned TV channel RT. But she left open the possibility, saying Guaido had broken the law and is "a Venezuelan who conspires with foreign governments to overthrow a constitutional government."