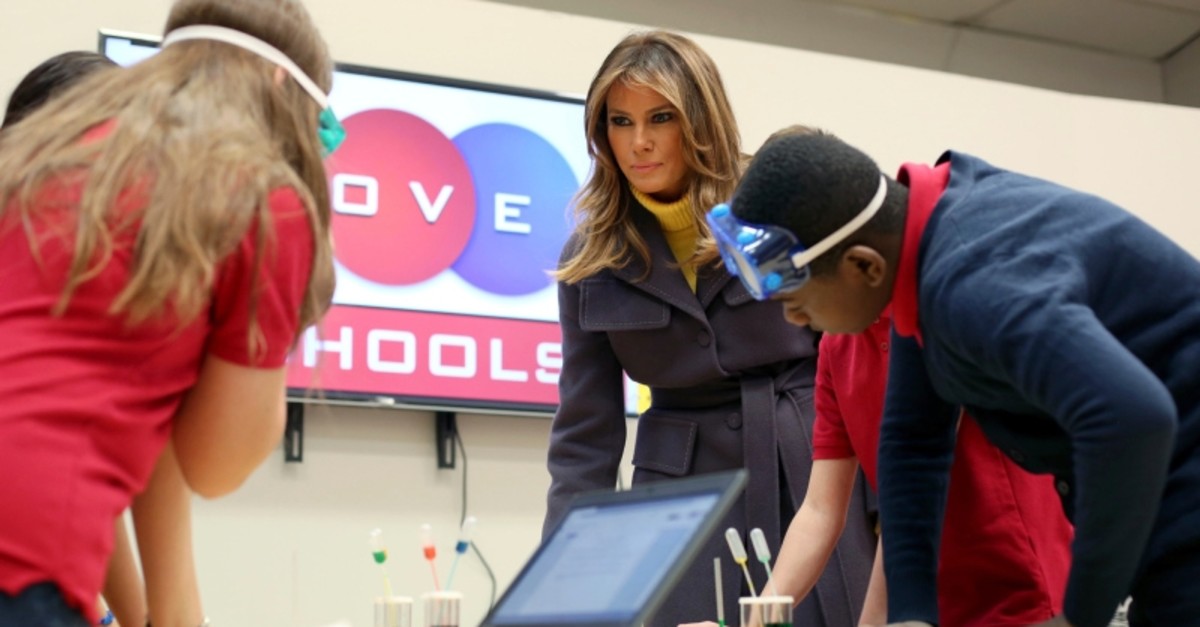 Melania Trump talks with sixth grade students who were working on an experiment in science class during a visit to Dove School of Discovery in Tulsa on Monday, March 4, 2019. (AP Photo)
by Daily Sabah with AA Mar 05, 2019 10:39 pm

Trump paid a visit to the Dove School of Discovery during her anti-bullying "Be Best" initiative.

"Thank you to the teachers, leadership & students of DOVE School of Discovery in Tulsa for welcoming me today. There is great work being done! It is so important that education includes not only academics, but the importance of a strong sense of character & values. #BeBest," Trump wrote on Twitter.

Thank you to the teachers, leadership & students of DOVE School of Discovery in Tulsa for welcoming me today. There is great work being done! It is so important that education includes not only academics, but the importance of a strong sense of character & values. #BeBest pic.twitter.com/sRRMMASrlx

Residing in Pennsylvania since 1999, FETÖ's ringleader Fetullah Gülen is known as the man who controls around 140 charter schools and $500 million annually from the U.S. government, according to some U.S. media reports. Around 60,000 students are attending them annually.

Speaking at a roundtable interview with the Anadolu Agency's Editors' Desk on Wednesday, Interior Minister Süleyman Soylu said the charter school network alone brings FETÖ some $800 million annually. The terror group may also get another $200 million through donations, he added.

The film offers "a shocking, first-hand look inside the schools while revealing the corruption of those attempting to privatize public schools through education reform in America," says its official website, while describing "questionable academic labor" practices at schools operated by FETÖ as the "worst-case scenario for taxpayer-funded charter schools."

While the administrators of FETÖ schools deny they have links to Gülen, the financial relationships between the schools and other FETÖ institutions raise questions about the relationship. Some of the schools are currently under FBI investigation for irregularities, unlawful profits, corruption, fraud and forgery.

The Gülenist schools in Oklahoma are no exception. In his book titled "Empire of Deceit: An Investigation of the Gülen School Network," lawyer Robert Amsterdam explains that the controversial group operates four schools in Oklahoma, which have made more than 300 H1-B visa applications for its sympathizers at the expense of American teachers, and funneled millions of U.S. taxpayers dollars to their affiliated businesses and foundations.

An investigative report from the Oklahoma State Auditor in 2016 found that the Dove Science Academy in Oklahoma City paid the Sky Foundation, the Gülenist parent organization of Dove Schools that receive a significant amount of taxpayer money, approximately $3.182 million in lease payments, more than the original purchase price of its school property. "With the Sky Foundation and the Dove schools operating as the same legal organization, the auditor could find no legitimate purpose for the continued charging of lease payments above and beyond the purchase price of the facility," Amsterdam explains in his book.

Additionally, Sky Foundation collected $1.192 million more in lease payments from the Dove Charter Schools than it was due on the lease agreements between 2012 to 2014.

Following the critical audit, the Sky Foundation became inactive and the Dove Public Charter School Foundation was launched instead with common board members and almost an identical description.

In 2009, Tulsa Public Schools rejected renewal applications of Dove schools due to failures in services to students with special needs, in addition to disciplinary issues. The licenses were later maintained through the Lanston University.

The Gülenist schools in Oklahoma are also affiliated with the Harmony Public Schools in Texas, the largest Gülenist charter school network in the U.S. that operates more than 50 schools. The schools in Oklahoma pay significant amounts to Harmony for a range of management and administrative services through a support services agreement, in addition to licensing fees for use of intellectual property.

FETÖ's infiltrators in the military, from generals to low-ranking officers, were behind the coup attempt on July 15, 2016, that killed 250 people, and Turkey has already sent a large cache of evidence to U.S. officials implicating FETÖ in the attempt.

The United States' apparent reluctance to extradite Gülen, one of the most wanted people in Turkey, remains a deep rift in relations between the two countries. Ankara formally requested Gülen be extradited on July 19, 2016.

Since then however, Turkish officials believe there was insufficient progress on the matter. FETÖ is also accused of infiltrating educational and other institutions in Turkey and worldwide for nefarious purposes, including subverting the state.