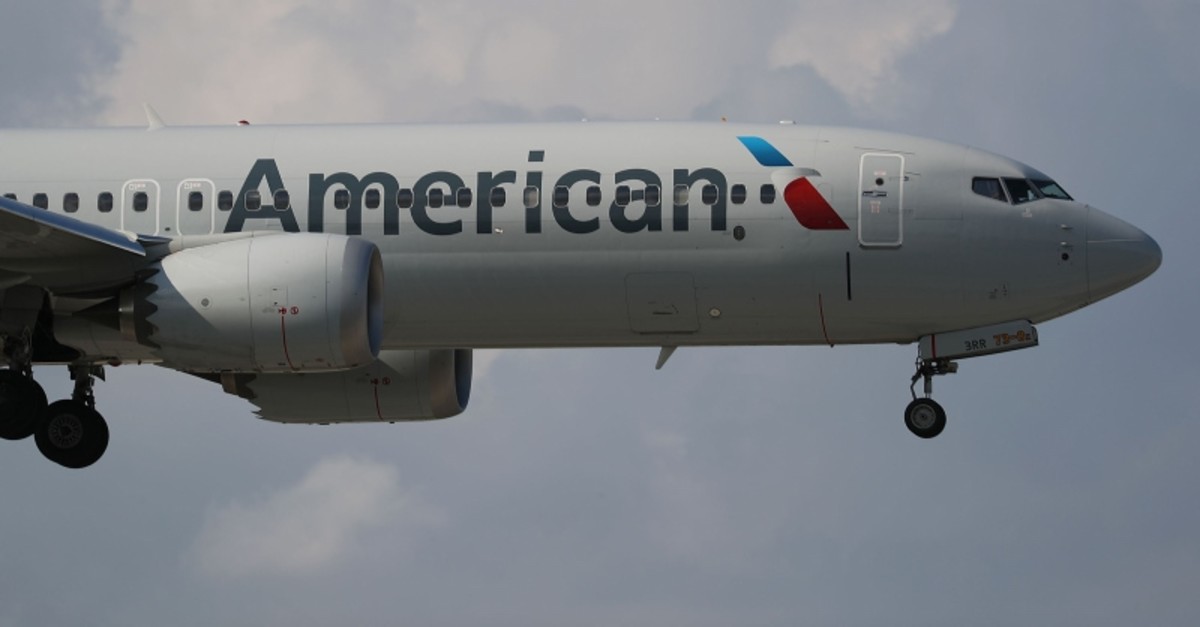 The United States said there is "no basis" to ground Boeing 737 Max airplanes, after a second deadly crash involving the model in less than five months prompted governments worldwide to ban the aircraft.

Despite the aviation giant's assurances that the plane is safe and reliable, much of the world, including the entire European Union, grounded the Boeing jetliner involved in the Ethiopian Airlines crash or banned it from their airspace, leaving the U.S. as one of the few remaining operators of the plane.

U.S.-based Boeing has said it has no reason to pull the popular aircraft from the skies and does not intend to issue new recommendations about the aircraft to customers. Boeing's CEO Dennis Muilenburg also spoke with President Donald Trump and reiterated that the 737 Max 8 is safe, the company said. Its technical team, meanwhile, joined American, Israeli, Kenyan and other aviation experts in the investigation led by Ethiopian authorities.

Some U.S. airlines expressed support for the Boeing model, and American Airlines and Southwest continued flying them. A vice president for American, the world's biggest carrier, which has 24 Max 8s, said they had "full confidence in the aircraft."

A new Ethiopian Airlines 737 Max 8 went down minutes into a flight from Addis Ababa to Nairobi on Sunday, killing all 157 people on board.

That followed the October crash of a new Lion Air jet of the same model in Indonesia, which killed 189 people shortly after takeoff from Jakarta.

The widening actions against the aircraft puts pressure on Boeing — the world's biggest plane manufacturer — to prove the Max planes are safe, and the company has said it is rolling out flight software updates by April that could address issues with a faulty sensor.

The full extent of the impact of the aircraft bans on international travel routes was unclear. There are about 350 Max 8 planes currently in service around the world.

Air Canada, for example, announced it was canceling flights to London following Britain's decision to ban the aircraft.

The EU aviation safety agency also closed European airspace to all Max planes. It noted that the "exact causes" of the Lion Air crash were still being investigated.

"At this early stage of the related investigation, it cannot be excluded that similar causes may have contributed to both events," the agency added. 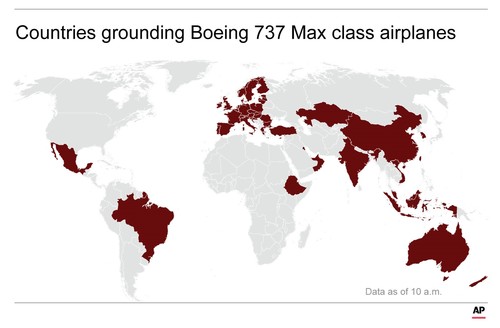 India joined the list of countries to ban the jet, a day after saying it had imposed additional interim safety requirements for ground engineers and crew for the aircraft.

New Zealand has also temporarily banned the aircraft from its airspace.

Turkish Airlines, one of the largest carriers in the world, said it was suspending use of its 12 Max aircraft from Wednesday, until "uncertainty" was clarified.

U.S. President Donald Trump weighed in with a blistering tweet on Tuesday: "Airplanes are becoming far too complex to fly."

"Pilots are no longer needed, but rather computer scientists from MIT," he wrote, referring to the prestigious university.

U.S. carriers have so far appeared to maintain confidence in Boeing, which has been ordered by the FAA to make changes to flight systems and pilot training procedures.

The move was not enough to reassure the UK Civil Aviation Authority, which said it was banning the planes from U.K. airspace "as a precautionary measure."

Global air travel hub Singapore, as well as Australia, Malaysia and Oman, were among the other countries to ban all Max planes from their airspace.

There are currently no 737 Max planes in operation by Vietnam carriers, though budget carrier Vietjet has ordered 200 of the model and were expected to receive initial deliveries in the first quarter of this year.

China, a hugely important market for Boeing, has ordered domestic airlines to suspend operations of the plane.

Boeing has described the Max series as its fastest-selling family of planes, with more than 5,000 orders placed to date from about 100 customers.

But not since the 1970s — when the McDonnell Douglas DC-10 suffered successive fatal incidents — has a new model been involved in two deadly accidents in such a short period.

"So it's not just a mechanical, it is not just a software problem, but it is a problem of communication and trust," he said.

The plane involved in Sunday's crash was less than four months old, with Ethiopian Airlines saying it was delivered on Nov. 15.

It went down near the village of Tulu Fara, some 40 miles (60 kilometers) east of Addis Ababa.

Ethiopian Airlines chief executive Tewolde GebreMariam said the plane had flown in from Johannesburg, spent three hours in Addis and was "dispatched with no remark," meaning no problems were flagged.

Investigators have recovered the black box flight recorders, which could potentially provide information about what happened, depending on their condition.