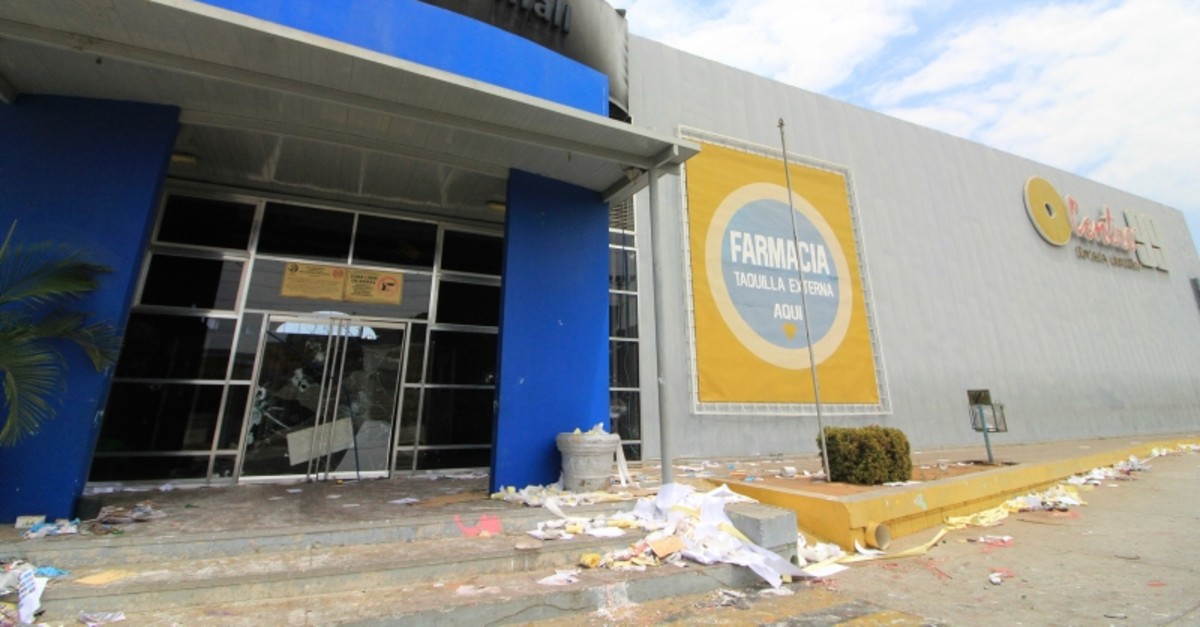 The main entrance of a mall stands burned and damaged after looting the previous day in Maracaibo, Venezuela, Wednesday, March 13, 2019. (AP Photo)
by Mar 13, 2019 12:00 am
President Nicolas Maduro's government scrambled on Wednesday to return power to western Venezuela following heavy looting in the country's second largest city, while China offered to help the South American nation end its worst blackout on record.

Power had returned to many parts of Venezuela after a nationwide outage last week, with the country's main port terminal of Jose, which is crucial for the country's oil exports, resuming operations

The ruling Socialist Party blamed the outage on an act of U.S. sabotage, accusing President Donald Trump of being responsible for several cyber attacks on Venezuela's main dam.

But power supplies remained patchy in the sweltering western state of Zulia, where anger after nearly a week without power overflowed into street violence.

Looters smashed shop windows and made off with merchandise in more than 300 businesses across the state, located along the border with Colombia, the Zulia chapter of business organization Fedecamaras said in a statement.

"About 100 people came into the store and took all the food, the point of sale terminals," said Maria Centeno, 29, the owner of a store selling food and furniture that was looted on Sunday. "They were people from the community. The police came by and they told me to sort it out myself."

Following the wave of pillaging on Sunday, many businesses sold off their remaining merchandise on the cheap on fears that they, too, would be hit by mobs.

The country's top food company, Empresas Polar, said four facilities in Maracaibo, Venezuela's biggest city after Caracas, the capital, had been sacked this week, with looters making off with water, soft drinks and pasta.

The Information Ministry did not immediately reply to a request for comment.

In Maracaibo, once known for flashy displays of oil wealth, people nervously bought food, some of them crying, at the few business that remained open. Gasoline lines stretched for blocks. Many worried how they would continue eating.

"In my house I have one kilo of rice and one kilo of lentils," said Jose Navas, 53, a security guard. "That's what I'll eat today. What will I eat tomorrow? This is really bad."

China on Wednesday said it was willing to provide help and technical support to restore electricity, and backed Maduro's assertion that the problem was the result of sabotage.

Maduro's critics have scoffed at the sabotage explanation, insisting that rampant corruption and a decade of incompetent management by state authorities were to blame.

With no electricity, hospitals struggled to keep equipment running and food rotted in the tropical heat. On Monday, Venezuelans unable to obtain potable water for home use formed lines to fill containers from a sewage pipe.

The United States is preparing to withdraw its remaining diplomats in Venezuela, an effort that will not involve the U.S. military, after Maduro on Tuesday ordered them to leave within 72 hours.

Venezuela authorities on Tuesday night released reporter Luis Carlos Diaz, who had been seized by intelligence agents the day before amid state-media accusations he had been involved in the blackout.

A judge ordered him not to leave the country and prohibited him from making public statements - a move rights groups slammed as another example of a growing crackdown on media and free press.

"The prohibition on speaking to the media constitutes a new form of censorship that seeks to prevent the public from knowing what happened during the arbitrary detention of Luis Carlos Diaz," rights group Public Space wrote on Twitter.