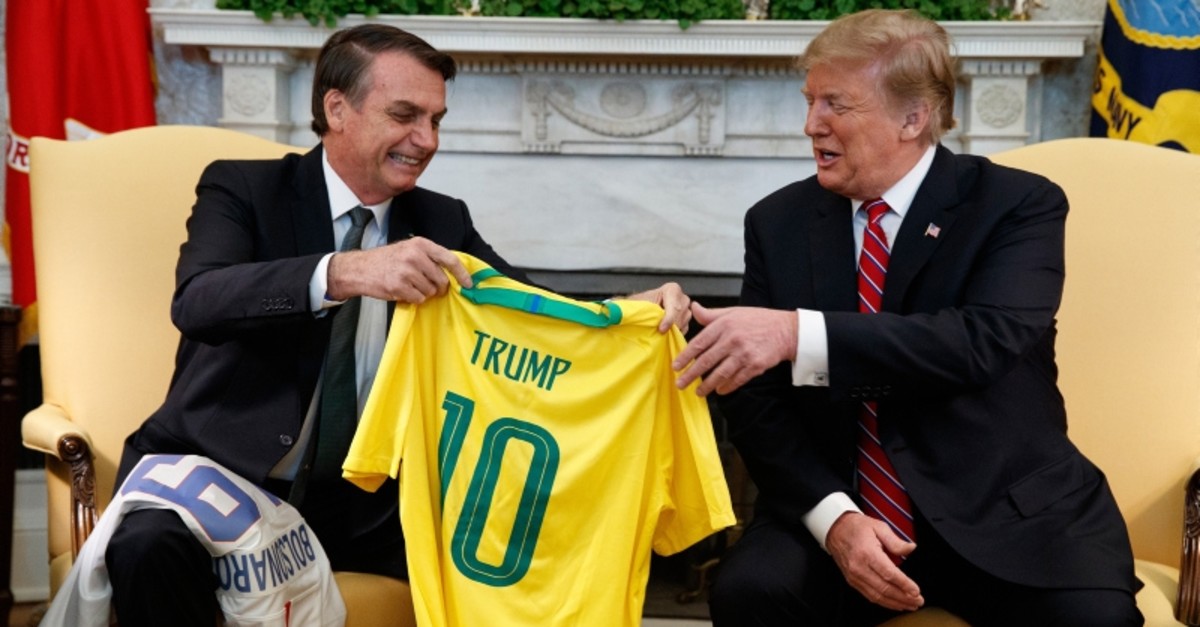 U.S. President Donald Trump gave Brazil's new far-right leader Jair Bolsonaro a ringing endorsement in the Oval Office on Tuesday, saying he was looking at a NATO membership or some other alliance for Brazil.

At the outset of their first meeting, the two populist presidents exchanged soccer jerseys from their national teams, with Trump's name emblazoned on Brazil's famous yellow shirt and Bolsonaro's on the USA uniform.

Bolsonaro, a former army captain who styled his 2018 campaign on Trump's 2016 run, has declared himself on unabashed admirer of the U.S. president and his politics and the American way of life.

Despite the friendly rhetoric, no major breakthroughs were expected from the White House meeting.

Trump did give his verbal support, however, to expanding Brazil's presence in major multinational organizations, like NATO and the OECD.

"We're going to look at that very, very strongly in terms of - whether it's NATO or it's something having to do with alliance," Trump told reporters, sitting next to Bolsonaro.

Brazilian government officials had said last week that they expected the United States to name Brazil as a major non-NATO ally. But proposing Brazil for NATO membership would take that a step further.

Colombia became in 2018 the only Latin American nation to join the North Atlantic Treaty Organization, as a "global partner," which means it will not necessarily have to take part in military action.

Trump also said he supported Brazil's efforts to join the Organisation for Economic Co-operation and Development (OECD), a club of the world's advanced economies.

Brazil, the world's eighth-largest economy, applied in 2017 to join the OECD, which has around three dozen members including Latin American countries Mexico, Chile and Colombia.

A senior member of Bolsonaro's economic team said last week Brazil did not expect the U.S. government to announce support for its bid to join the OECD during Bolsonaro's visit.

Trump said he and Bolsonaro would also discuss improving trade between the two largest economies in the Western Hemisphere and cooperation on the crisis in Venezuela, where both leaders want to oust President Nicolas Maduro.

Ahead of Tuesday's Oval Office meeting, Bolsonaro waived a visa requirement for U.S. visitors to Brazil and later in a Fox News interview on Monday night threw his weight behind Trump's immigration agenda, which includes a wall on the Mexican border.

"We do agree with President Trump's decision or proposal on the wall," Bolsonaro said, in remarks translated to English by the broadcaster. "The vast majority of potential immigrants do not have good intentions. They do not intend to do the best or do good to the U.S. people."