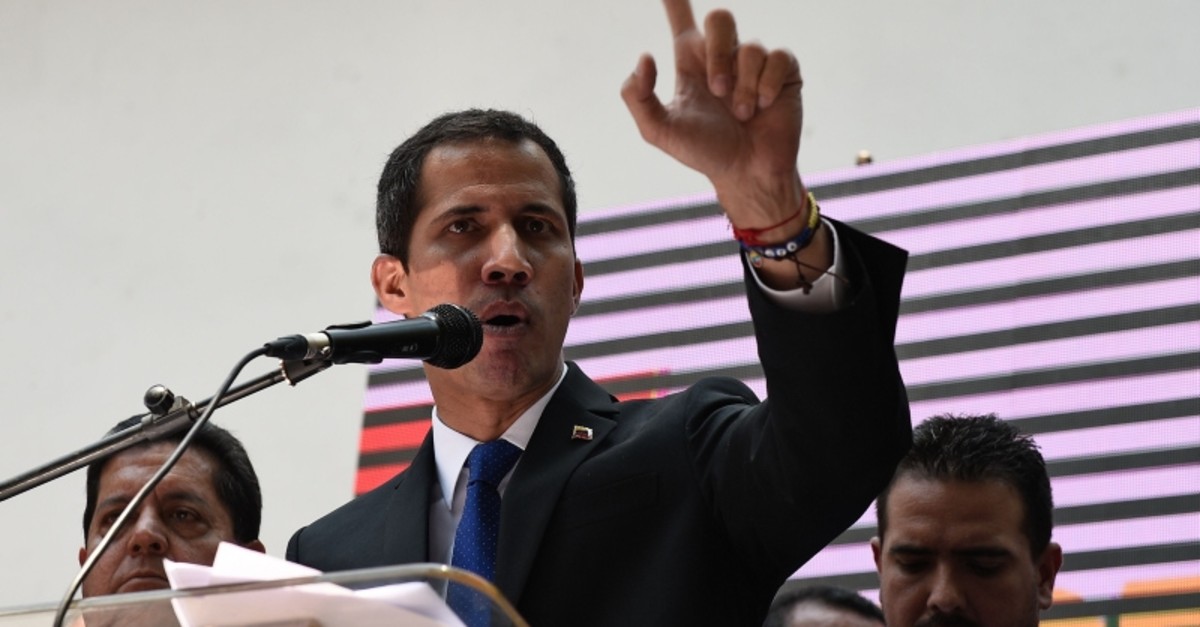 Venezuelan opposition leader and self-proclaimed interim president Juan Guaido gestures as he speaks giving details of what he calls ,Operation Freedom, during a rally with local and regional leaders, in Caracas on March 27, 2019. (AFP Photo)
by Mar 28, 2019 12:00 am

Venezuela's auditor general's office announced Thursday it has stripped opposition leader and speaker of congress Juan Guaido of the right to hold public office for 15 years.

The move, announced by Auditor General Elvis Amoroso on state television, marked another effort by President Nicolas Maduro's regime to politically sideline Guaido, who is recognized by the U.S. and 50 other countries as Venezuela's interim president.

Amoroso said his office decided "to ban this citizen (Juan Guaido) from all elected public office for the maximum duration under the law."

Venezuela's single-chamber congress, called the National Assembly, is in opposition hands and stands as the sole institution not under the control of Maduro.

The country's Supreme Court and a parallel legislature set up by Maduro in 2017 regularly adopt decisions scrapping National Assembly motions against the regime.

The National Assembly, for its part, often ignores or passes laws annulling decisions by what it regards as an "illegitimate" regime, asserting that Guaido is in charge of the country constitutionally.

Although Maduro's government has heeded warnings from the United States to not arrest Guaido or face unspecified repercussions, the opposition leader's chief of staff was taken into custody last week and charged with "terrorism."

Maduro has also accused Guaido and the opposition of "terrorist acts" that caused a massive nationwide blackout for three days this week that authorities appeared to have repaired by Thursday.

The socialist president has been bolstered by the arrival last weekend of 100 Russian troops and Moscow's vow to stand up against what it said was a "coup" being fomented by Washington.

However, internationally, Maduro has been weakened by Guaido's rise to lead the previously fractured opposition and his endorsement as interim leader by most Western countries and big Latin American nations.

The United States has handed diplomatic missions and seats on some international organizations to Guaido's representatives, booting out Maduro's envoys.

In a month, Washington is set to greatly ratchet up its sanctions on Venezuela by banning crude imports from the country, yanking a top revenue-earner for Caracas's already badly depleted coffers.

U.S. President Donald Trump on Wednesday told Russia to "get out" of Venezuela.

Moscow responded by saying its troops will stay "for as long as necessary."