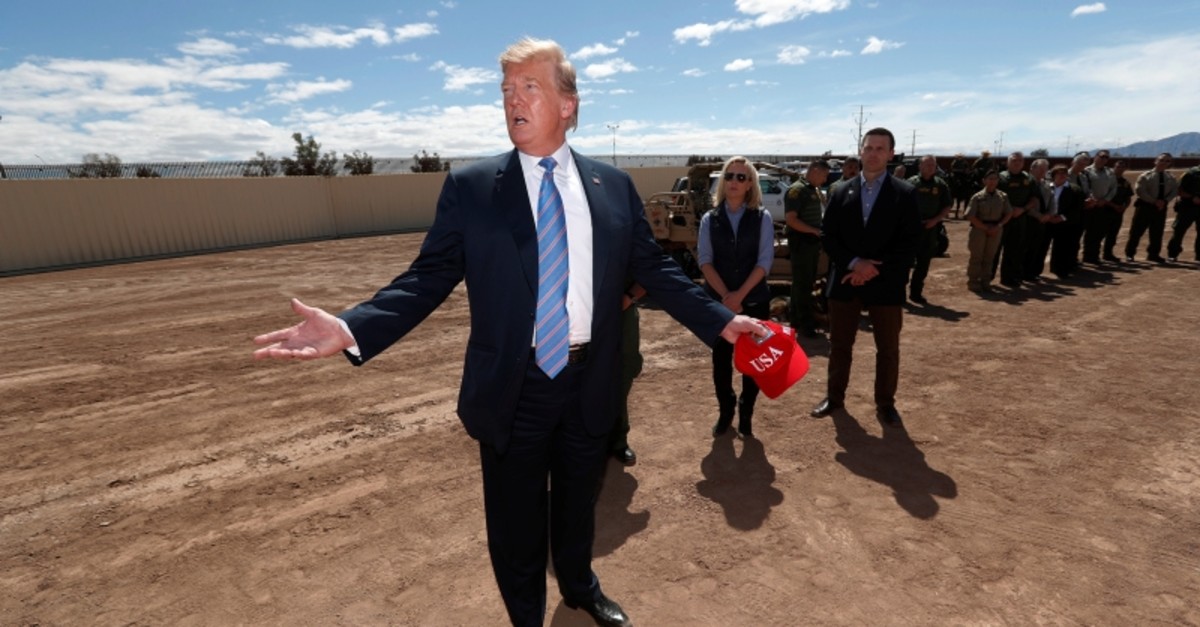 Declaring "our country is full," President Donald Trump on Friday insisted the U.S. immigration system was overburdened and illegal crossings must be stopped as he inspected a refurbished section of fencing at the Mexican border.

Trump, making a renewed push for border security as a central campaign issue for his 2020 re-election, participated in a briefing on immigration and border security in Calexico before viewing a 2-mile (3.2-kilometer) see-through steel-slat barrier that was a long-planned replacement for an older barrier — and not new wall.

"There is indeed an emergency on our southern border," Trump said at the briefing, adding that there has been a sharp uptick in illegal crossings. "It's a colossal surge and it's overwhelming our immigration system, and we can't let that happen. So, as I say, and this is our new statement: The system is full. Can't take you anymore."

He went on to flatly declare: "Our country is full."

As Air Force One touched down in the state, California and 19 other states that are suing Trump over his emergency declaration to build a border wall requested a court order to stop money from being diverted to fund the project. But Trump, who ratcheted up his hardline immigration rhetoric in recent weeks, declared that his move, which included vetoing a congressional vote, was necessary.

Also on Friday, House Democrats filed a lawsuit preventing Trump from spending more money than Congress has approved to erect barriers along the southwestern border. Congress approved just under $1.4 billion for work on border barricades. Trump has asserted he can use his powers as chief executive to transfer an additional $6.7 billion to wall construction.

Trump, who earlier in the week threatened to shut down the border over the high numbers of migrants trying to enter the U.S., appeared to walk back his comments Thursday. He said Friday that it was because Mexico had gotten tougher in stopping an influx of immigrants from moving north.

"Mexico has been absolutely terrific for the last four days," the president said as he left the White House. "I never changed my mind at all. I may shut it down at some point."

The president's visit came a day after he withdrew his nominee to lead U.S. Immigration and Customs Enforcement. Longtime border official Ron Vitiello appeared to be cruising toward confirmation, but Trump said Friday that he wanted to go in a "tougher direction."

Trump, as he so often does, mixed fact with fiction when warning of the threat at the border. When complaining about the Flores legal settlement that governs treatment of migrant children and families, he blamed "Judge Flores, whoever you may be." But Flores was an unaccompanied 15-year-old girl from El Salvador.

He also downplayed the claims of people seeking asylum at the border, declaring without evidence that many are gang members while comparing some of their efforts to find safety in the U.S. to special counsel Robert Mueller's investigation of Russian interference in the 2016 elections.

As the president showed off the renovated section of the barrier to reporters, a balloon depicting Trump as a baby floated further down the border. And as Trump landed in California, the state's governor ripped the president's push for Congress to pass legislation that would tighten asylum rules to make it harder for people to qualify.

"Since our founding, this country has been a place of refuge — a safe haven for people fleeing tyranny, oppression and violence. His words show a total disregard of the Constitution, our justice system, and what it means to be an American," said Democratic Gov. Gavin Newsom.

Trump has been increasingly exasperated at his inability to halt the swelling number of migrants entering the U.S., including thousands who have been released after arriving because border officials have no space for them. Arrests along the southern border have skyrocketed in recent months, and border agents were on track to make 100,000 arrests or denials of entry in March, a 12-year high. More than half of those are families with children, who require extra care.

The southern border is nearly 2,000 miles (3,200 kilometers) long and already has about 650 miles (1,050 kilometers) of different types of barriers, including short vehicle barricades and tall steel fences that go up to 30 feet (9 meters) high. Most of the fencing was built during George W. Bush's administration, and there have been updates and maintenance throughout other administrations.

Trump has yet to complete any new mileage of fencing or other barriers anywhere on the border, though he declared Friday that at least 400 miles (650 kilometers) of the border barrier would be erected over the next two years. His administration so far has only replaced existing fencing. Construction for that small chunk of fencing cost about $18 million, began in February 2018 and was completed in October. Plans to replace that fence date back to 2009, during President Barack Obama's tenure.

Administration officials had been studying ways to minimize the economic impact of a potential border closure in case Trump went through with his threat, including keeping trucking lanes open or closing only certain ports.

But even absent that extraordinary step, delays at border stations have been mounting after some 2,000 border officers were reassigned from checking vehicles to deal with migrant crowds.

After the border visit, Trump traveled to Los Angeles for a pair of fundraisers in the deeply liberal city. He then traveled to Las Vegas for another re-election fundraiser and an address to the Republican Jewish Coalition, which is backed by GOP mega-donor Sheldon Adelson.

Trump, who campaigned on a promise to secure the border, has thrown virtually every option his aides have been able to think of at the problem, to little avail. He's deployed the military, signed an emergency declaration to fund a border wall and threatened to completely seal the southern border. On Thursday he added a new threat, warning of hefty tariffs on cars made in Mexico if the country doesn't abide by his demands.

Now, with the encouragement of an influential aide and his re-election campaign on the horizon, Trump is looking at personnel changes as he tries to shift blame elsewhere. The first move was made Thursday, when the White House unexpectedly pulled back the nomination of Ron Vitiello to permanently lead the Immigration and Customs Enforcement agency, where he had been acting director. The abrupt reversal was encouraged by top Trump policy adviser Stephen Miller and seen by some as part of a larger effort to bring on aides who share Miller's hardline immigration views.

The president said he wanted to go in a "tougher direction."

An empowered Miller is also eyeing the removal of Lee Francis Cissna, director of U.S. Citizenship and Immigration Services, which runs the legal immigration system, according to two people who spoke on condition of anonymity because they were not authorized to discuss internal staffing matters. The White House did not respond to questions Friday about whether Trump was on board with that plan.

Trump has become increasingly exasperated at his inability to do more to halt the swelling numbers of migrants entering the country. Aides, too, have complained they are stymied by regulatory guardrails, legal limitations and a Congress that has scoffed at the president's requests for legislative changes.

Immigration experts say Trump's own immigration policies have caused so much chaos along the border that they may be encouraging illegal crossings. The furor over family separations last summer helped to highlight the fact that families won't be detained for long in the U.S. if they're detained at all. And metering, in which people are asked to return to a busy port of entry on another day to seek asylum, may have encouraged asylum seekers to cross illegally, said Andrew Selee, president of the Migration Policy Institute, a non-partisan think tank.

"This policy chaos, coupled with a sense that the U.S. government may at some point really shut down the border, has generated an urgency to migrate now while it is still possible," he said.

Whatever the reasons for the migrant surge, there is a growing consensus that federal border resources are overwhelmed. While illegal border crossings are still down sharply from their peak in 2000, they have nonetheless reached a 12-year high. And while most illegal border crossers used to be single Mexican nationals coming to the U.S. in search of work, more than half are now parents and children who have traveled from Central America to seek refuge in the U.S.

Those families, along with unaccompanied children, are subject to specific laws and court settlements that prevent them from being immediately sent back to their home countries. Immigrant processing and holding centers have been overwhelmed, forcing officials to dramatically expand a practice Trump has long mocked as "catch and release."

Indeed, ICE has set free more than 125,000 people who came into the U.S. as families since late last year and is now busing people hundreds of miles inland, releasing them at Greyhound stations and churches in cities like Albuquerque, San Antonio and Phoenix because towns close to the border already have more than they can handle.

Homeland Security Secretary Kirstjen Nielsen also has voiced increasing exasperation, equating the situation to the aftermath of a Category 5 hurricane.

"We have tried everything that we can at DHS," she said Thursday on CNN. "We are out of the ability to manage this flow and they need help."

She recently called on Congress to consider changes to the immigration system. But those efforts have so far landed with a thud.

House Democrats would almost certainly reject any plans to simply deport unaccompanied minors or otherwise rewrite the law governing asylum or family detentions that they see as protecting young migrants who are often fleeing difficult conditions. In the Senate, where Republicans have the majority, there's little interest in big legislative proposals this year, especially on a divisive issue like immigration. Trump's ideas could be especially tough for senators facing re-election in 2020 in Colorado, Arizona and North Carolina, swing states with sizable Latino and immigrant populations.

In the meantime, tensions between agencies and at the White House have been bubbling up. At the Department of Homeland Security, officials have expressed frustration with colleagues at the department of Health and Human Services and at the Pentagon, accusing them of doing too little to help. And there are complaints about the White House and what some see as an effort by Miller to dismantle the leadership of the department, in part to shift the blame away from the White House.