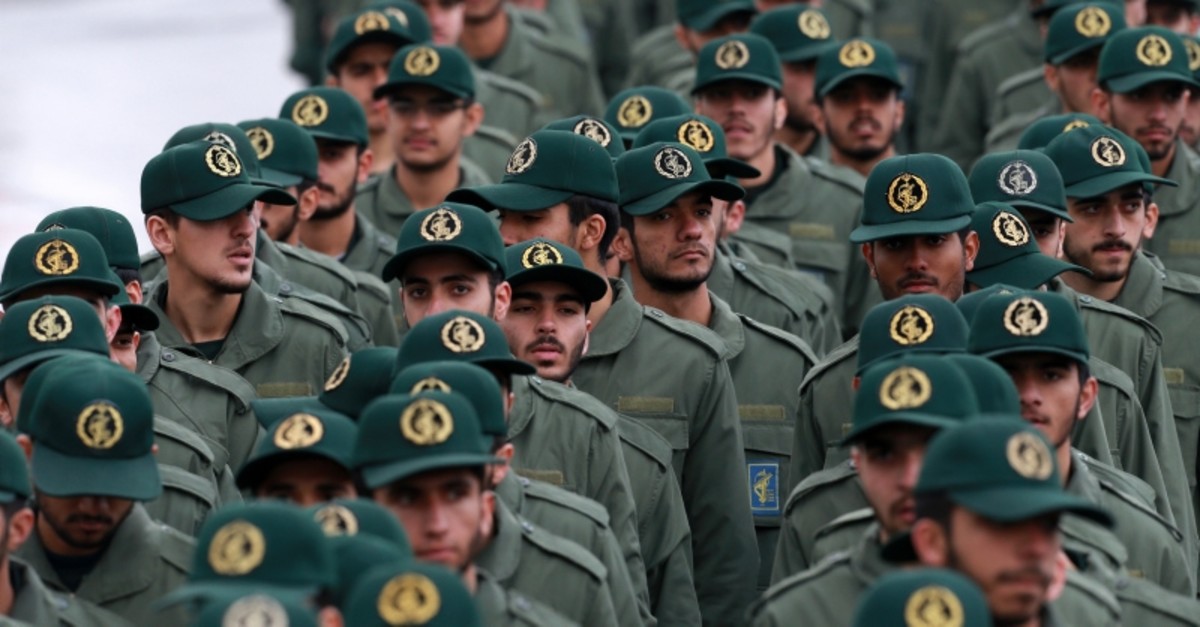 In this Feb, 11, 2019 file photo, Iranian Revolutionary Guard members arrive for a ceremony celebrating the 40th anniversary of the Islamic Revolution, at the Azadi, or Freedom, Square, in Tehran, Iran. (AP Photo)
by Compiled from Wire Services Apr 08, 2019 5:20 pm

It is the first time that the U.S. has designated a part of another government as a terrorist organization.

The designation imposes sanctions that include freezes on assets the Islamic Revolutionary Guard Corps may have in U.S. jurisdictions and a ban on Americans doing business with it.

Trump said in a statement that the "unprecedented" move "recognizes the reality that Iran is not only a State Sponsor of Terrorism, but that the IRGC actively participates in, finances, and promotes terrorism as a tool of statecraft."

"It makes crystal clear the risks of conducting business with, or providing support to, the IRGC. If you are doing business with the IRGC, you will be bankrolling terrorism," the president said.

In a statement carried by the official news agency IRNA, the Supreme National Security Council slammed Washington's move as an "illegal and foolish act".

In return, it "declares that it considers the regime of the USA a 'state sponsor of terrorism' and 'the Central Command of America, known as CENTCOM' and all forces related to it 'terrorist groups'," the statement said.

"The IRGC unlike America and its regional allies who have always supported extremist and terrorist groups in West Asia region, have always been in the frontline of fighting terrorism and extremism in the region," the council added.

Zarif blasted the U.S. move on Twitter, saying it was timed to support Israeli Prime Minister Benjamin Netanyahu ahead of Tuesday's parliamentary election in the Jewish state.

Israeli Prime Minister Benjamin Netanyahu lauded the U.S. decision to designate Iran's Revolutionary Guards a terrorist organization, saying Trump had responded to a "request of mine."

"Thank you, my dear friend, U.S. President Donald Trump, for having decided to declare Iran's Revolutionary Guards a terrorist organization," Netanyahu said in a statement a day ahead of Israeli elections in which he is seeking a fifth term.

"Thank you for responding to another important request of mine, which serves the interests of our countries and countries of the region," he said.

The IRGC is a paramilitary organization formed in the wake of Iran's 1979 Islamic Revolution to defend its clerically overseen government. The force answers only to Iran's supreme leader, operates independently of the regular military and has vast economic interests across the country.

The designation allows the U.S. to deny entry to people found to have provided the Guard with material support or prosecute them for sanctions violations. That could include European and Asian companies and businesspeople who deal with the Guard's many affiliates.

It will also complicate diplomacy. Without exclusions or waivers to the designation, U.S. troops and diplomats could be barred from contact with Iraqi or Lebanese authorities who interact with Guard officials or surrogates.

The Pentagon and U.S. intelligence agencies have raised concerns about the impact of the designation if the move does not allow contact with foreign officials who may have met with or communicated with Guard personnel. Those concerns have in part dissuaded previous administrations from taking the step, which has been considered for more than a decade.

The department currently designates 60 groups, such as al-Qaida and Daesh and their various affiliates, Hezbollah and numerous militant Palestinian factions, as "foreign terrorist organizations." But none of them is a state-run military.