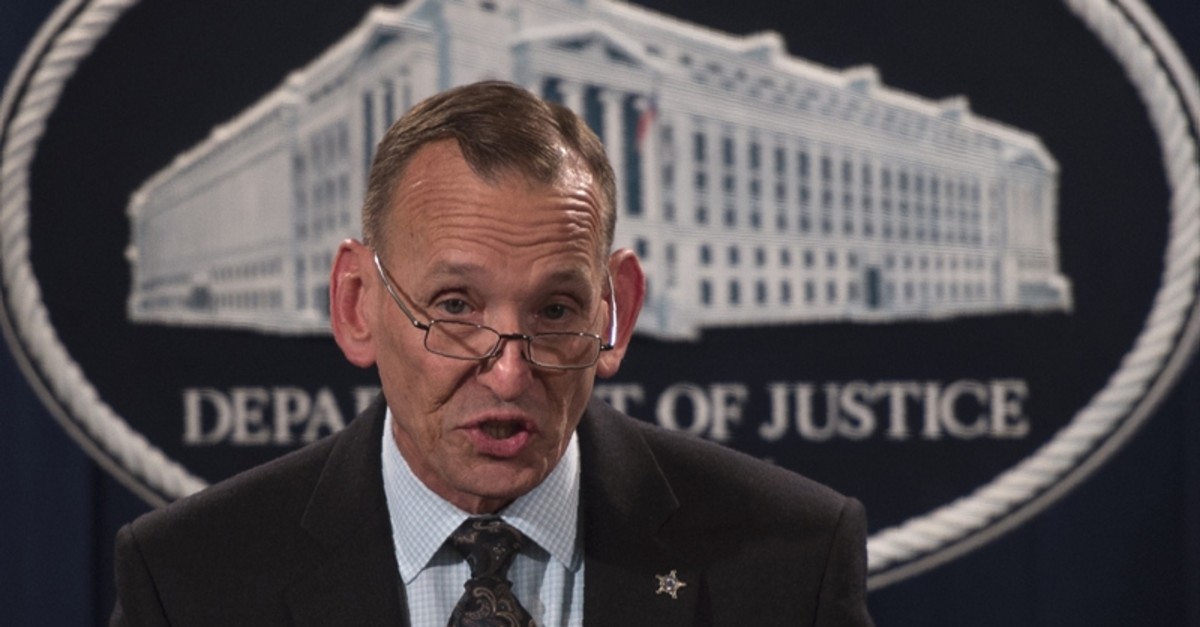 In this file photo taken on October 26, 2018 Director of the U.S. Secret Service Randolph Alles speaks during a press conference at the Department of Justice in Washington, following the arrest of bombing suspect Cesar Sayoc in Florida. (AFP Photo)
by Apr 08, 2019 11:39 pm

President Donald Trump is removing the director of the U.S. Secret Service, the agency that provides protection for him and other top U.S. officials, the White House said on Monday, a day after the ouster of Homeland Security Secretary Kirstjen Nielsen.

White House spokeswoman Sarah Sanders said James Murray, a career Secret Service agent, would take over the Secret Service in May. Alles had run the agency for two years and served in the U.S. Marine Corps for 35 years before retiring as a major general in 2011.

The Secret Service is responsible for protecting senior U.S. officials including the president and vice president, former presidents and visiting heads of state.

The agency came under scrutiny last week after a Chinese woman carrying electronic devices was charged with bluffing her way through security checks at Trump's Mar-a-Lago resort in Florida.

Chuck Schumer, the top Democrat in the Senate, called for Alles to testify before Congress "as soon as possible about the potential security vulnerabilities at Mar-a-Lago ... and other counterintelligence and national security threats."

The series of sudden changes at DHS also raised eyebrows with some Republican leaders in the Senate.

"We are dealing with a humanitarian and security crisis at the border because Congress failed to act," said Ron Johnson, the chairman of the Senate Homeland Security Committee.

"In addition to congressional dysfunction, I am concerned with a growing leadership void within the department tasked with addressing some of the most significant problems facing the nation."

The White House did not respond to requests for comment on the overhaul of the department.

The removal of Alles marked the latest in a long line of firings and resignations of senior officials in the Trump administration, a list that has included the secretaries of state, defense, homeland security, interior, veterans affairs and health and human services, the attorney general and numerous senior White House aides.

The first sign of Trump's overhaul of Homeland Security came late on Thursday, when he abruptly pulled his nomination of Ron Vitiello as director of U.S. Immigration and Customs Enforcement, part of DHS.

Trump described that move as part of a policy change "going in a tougher direction."

The Republican president, seeking re-election in 2020, has taken a hard line on immigration since taking office in January 2017, and he has said he will make border security a central theme in next year's race.

His first Homeland Security secretary was John Kelly, who later became his chief of staff. Kelly and Trump had an often-difficult relationship. Nielsen had been an aide to Kelly.

Nielsen, who oversaw Trump's bitterly contested immigration policies during her tumultuous 16-month tenure, resigned amid a surge in the number of migrants at the border with Mexico.

Her departure had been long rumored particularly after criticism of the administration's 2018 family separation policy at the border with Mexico and as U.S. border officials estimated that 100,000 migrants were apprehended at the southern border in March, the highest level in a decade. Trump was so frustrated about the increase that he announced he would cut off U.S. aid to Guatemala, Honduras and El Salvador.