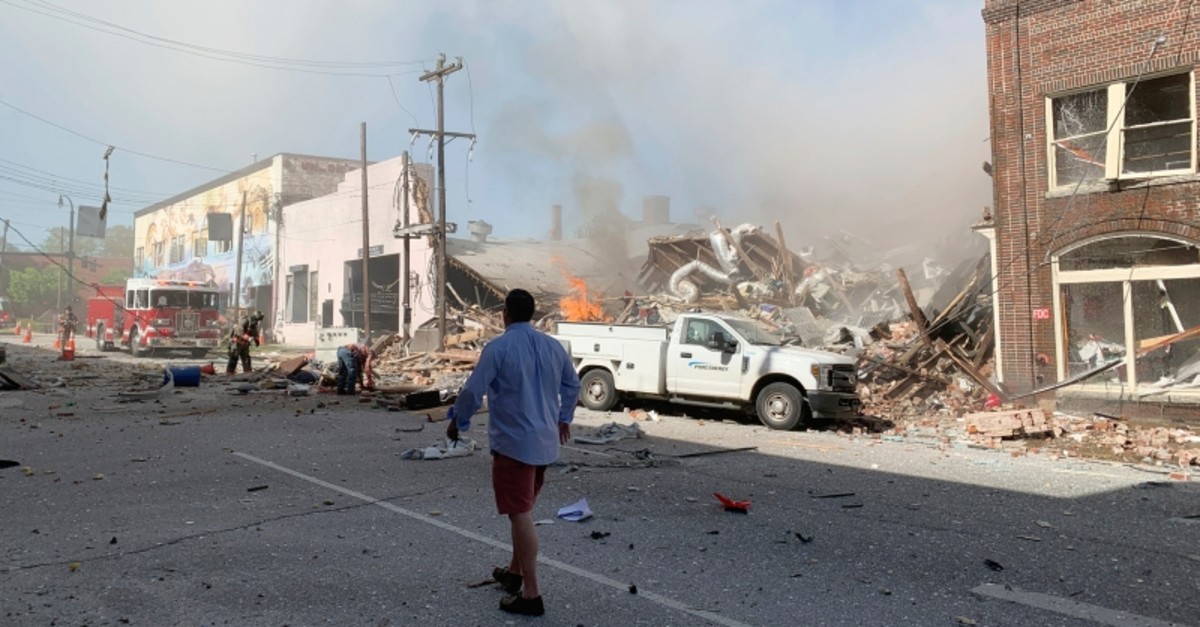 A gas explosion that partially collapsed a North Carolina building and set it ablaze Wednesday morning killed one person and injured more than a dozen others, police said.

Police cars blocked the streets near the explosion in downtown Durham and a thick, acrid smoke hung over the shopping district created from remodeled tobacco warehouses. At least two ladder trucks sprayed blasts of water into the smoldering rubble nearly two hours after the explosion.

Durham Police Department spokesman Wil Glenn said a contractor boring under a sidewalk hit a 2-inch gas line, triggering the explosion. One person was killed and 17 people were taken to area hospitals, Glenn said at a news conference. One firefighter was seriously injured, he said.

Jim Rogalski, a Duke University employee who works in an office directly across the street, told the News & Observer that roughly 100 people in the office watched as the explosion blew windows off the side of their building.

"People were sitting at their desks and ceiling tiles were falling," he told the newspaper. "Stuff flew off shelves. You could barely see for 25 feet from all the dust. People were screaming."

Blocks away, the blast shattered windows and blew at least one door off its hinges in the nearby Brightleaf shopping district. Ed Rains was on a nearby street and couldn't see the blast but heard it. "I thought someone had dropped a dumpster on the street," he said.

Students from the nearby Durham School of the Arts were evacuated and classes dismissed for the day.

Al Donaldson, a teacher at the school, was walking through a hallway when he heard a loud noise, sparking concern among faculty and students. He was in a school building about two blocks from the blast on the sprawling campus.

"There was a loud bang. It was concerning. We didn't know the origin at the time," he said. "I was in the hallway so I didn't so much feel it shake as experiencing a jarring sound."

A third of a mile away, Duke University employee Mary Williams said she heard the explosion and felt shaking at her building.

"I was in the kitchen. I heard this loud boom and the building shook. When I looked out, I saw the smoke billowing up. I was scared for whoever was in the vicinity because it did not look very good."

The collapsed building is occupied by Prescient Co., which said in July 2017 that it was moving its headquarters from Arvada, Colorado, and expected to employ about 60 executives, engineering and sales workers in Durham. The company uses specialized software to design and build precise materials that allow builders to assemble multi-story apartments, hotels and other commercial buildings faster and cheaper.

A coffee shop in the building, Kaffeinate, posted a sign this morning saying it was closed for the day.