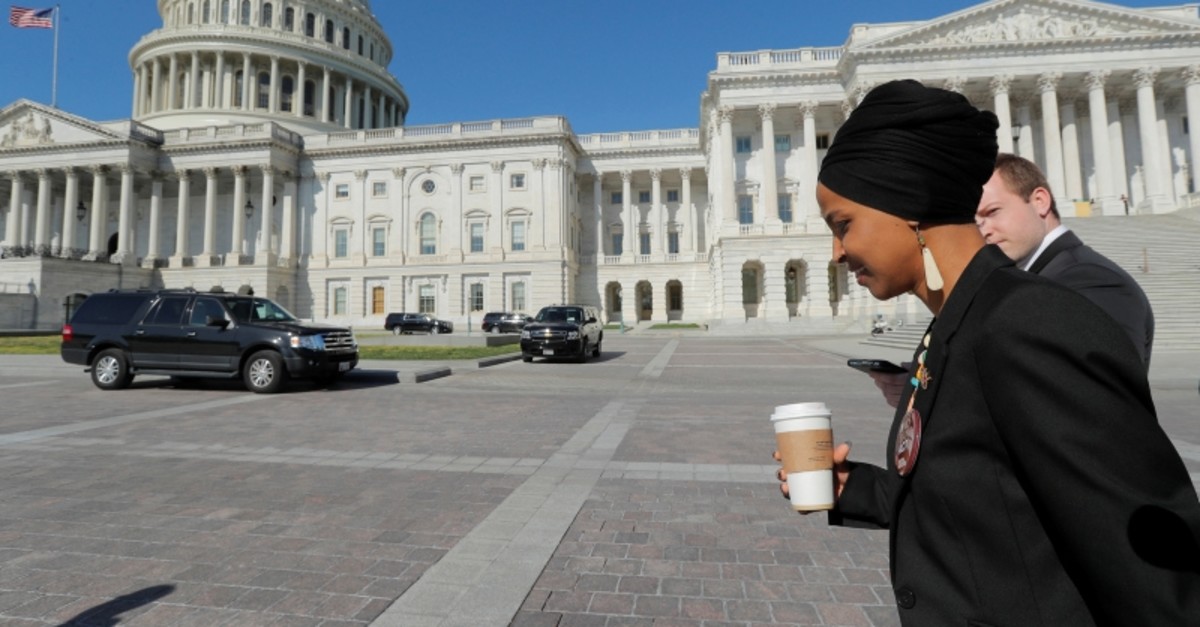 Rep. Ilhan Omar (D-MN) talks to reporters as she heads back into the U.S. Capitol after a news conference by members of the U.S. Congress (Reuters Photo)
by Compiled from Wire Services Apr 13, 2019 10:26 am

U.S. President Donald Trump is under fire from veteran Democrats in the Senate for his "disgusting" and "shameful" remarks on Democrat Congresswoman Ilhan Omar.

Earlier on Saturday, Trump tweeted a video and retweeted another person's tweet which targeted the Minnesota representative.

"Ilhan Omar is a leader with strength and courage. She won't back down to Trump's racism and hate, and neither will we. The disgusting and dangerous attacks against her must end," Sanders said.

"The President is inciting violence against a sitting Congresswoman—and an entire group of Americans based on their religion. It's disgusting. It's shameful. And any elected leader who refuses to condemn it shares responsibility for it," Warren said.

Trump criticized the Muslim lawmaker after comments surfaced of her talking about the Islamophobia Muslims faced in the post-Sept. 11 era.

The video pulls a snippet of Omar's speech last month to the Council on American-Islamic Relations in which she described the 2001 attacks on the World Trade Center as "some people did something," as well as news footage of the hijacked planes hitting the twin towers. Trump tweeted, "WE WILL NEVER FORGET!"

Neither Trump's tweet nor the video includes her full quote or the context of her comments.

Omar told CAIR in Los Angeles that many Muslims saw their civil liberties eroded after the attacks, and she advocated for activism.

"For far too long we have lived with the discomfort of being a second-class citizen and, frankly, I'm tired of it, and every single Muslim in this country should be tired of it," she said in the March 23 speech, according to video posted online. "CAIR was founded after 9/11 because they recognized that some people did something and that all of us were starting to lose access to our civil liberties."

CAIR was founded in 1994, according to its website, but its membership increased dramatically after the attacks.