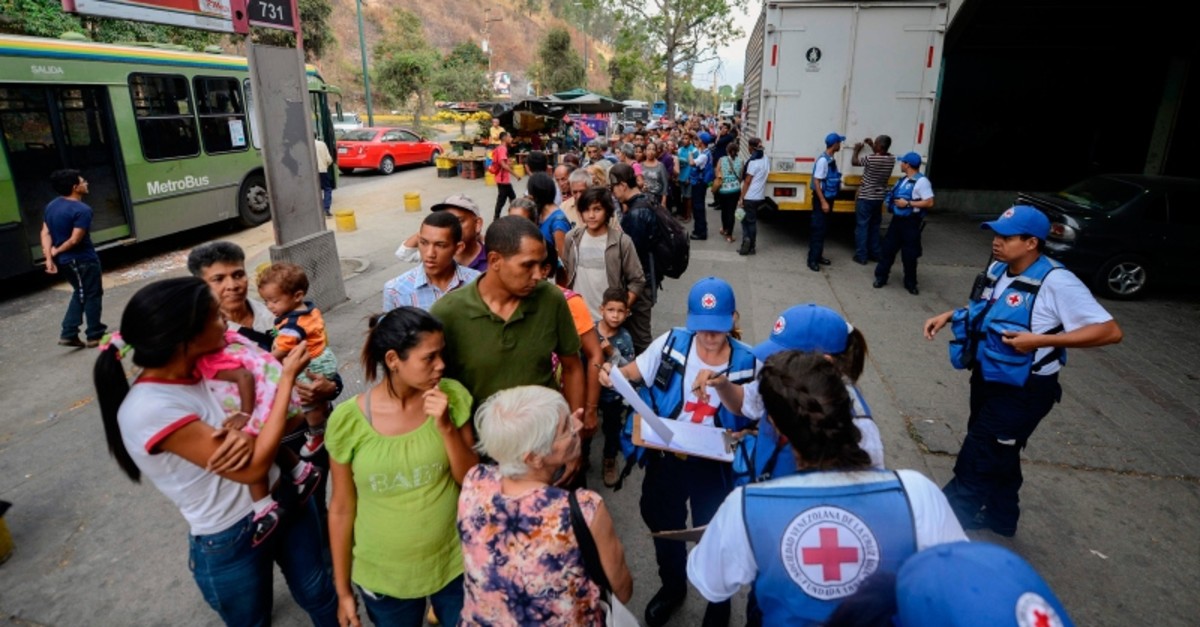 People queue to receive drums to collect water and water purification tablets from members of the Venezuelan Red Cross in Caricuao neighborhood in Caracas, Venezuela, on April 16, 2019. (AFP Photo)
by Apr 17, 2019 10:52 am

Humanitarian aid provided by the International Committee of the Red Cross (ICRC) began arriving in Venezuela on Tuesday, the Venezuelan Red Cross said.

"With a lot of joy and responsibility we want to inform that at this moment, the first consignment of humanitarian aid of the Red Cross is entering Venezuela," the Red Cross tweeted.

Local media also reported the landing of the first cargo plane with supplies on board at Maiquetia airport near Caracas.

The aid includes medical supplies and electricity generators, which will be distributed in hospitals around the country "in conformity with the fundamental principles of our movement, especially those of Neutrality, Impartiality and Independence," the Red Cross said.

"I am very happy that humanitarian aid has arrived," a local man told TVV television.

Venezuela has suffered from widespread power cuts which have crippled many hospitals.

The ICRC announced last week that it had tripled its budget for Venezuela to about $24.6 million and will expand its operations in the country after reaching an agreement with President Nicolas Maduro.

Maduro closed borders with Colombia and Brazil in February to prevent his rival, Juan Guaido, from bringing in humanitarian aid donated by the United States and Latin American countries into Venezuela, as it grapples with a massive economic crisis.

Guaido says hundreds of thousands of Venezuelans are in urgent need of food and medicine. But Maduro denies there is a humanitarian crisis and regards Guaido's aid effort as a US plot to overthrow him.

However, he agreed to the ICRC aid after a meeting with its president Peter Maurer last week, pledging to "promote the road of cooperation and international support, in favour of the people."

The Venezuelan Red Cross asked "everyone without exception not to allow the politicization" of the arrival of its aid on Tuesday.

Guaido said Tuesday was "a day of success for all Venezuelans and a large defeat for the usurper," a reference to Maduro.

However, the government will not allow a repetition of Guaido's attempt to bring "the famous and false humanitarian aid" into the country, the daily El Universal quoted the minister as saying.

More than 50 countries have recognized Guaido as Venezuela's interim president since January, after Maduro won a contested election in 2018.