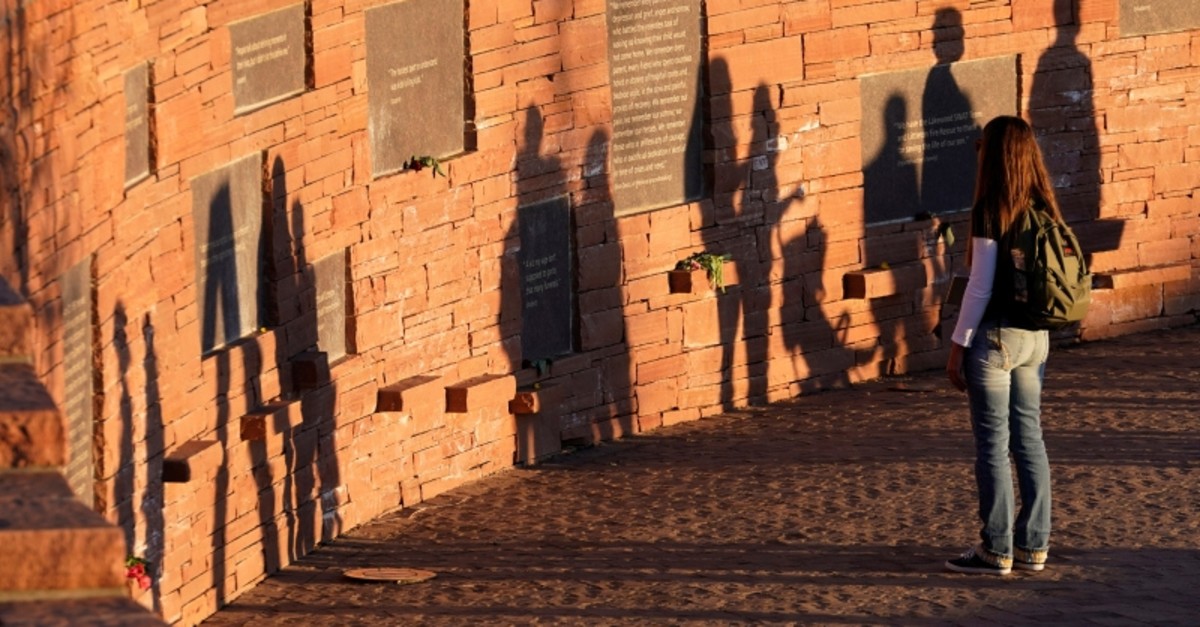 A week-long series of events commemorating the 20th anniversary of the Columbine High School massacre culminates on Saturday with a remembrance ceremony celebrating the lives of the 13 victims slain in the rampage.

On April 20, 1999, two Columbine students, just three weeks shy of graduation, stormed the suburban Denver school armed with shotguns, semiautomatic weapons and home-made bombs, fatally shooting 12 students and a teacher before committing suicide. Since then, the name of Columbine has become synonymous with school shootings.

Dozens of people gathered for a vigil on Friday, laying flowers at a memorial for the victims. They lit candles and prayed at a memorial in the town, and laid flowers on plaques bearing the names of victims.

An inner circular wall bears biographies of the victims carved into marble, while an outer wall lists those injured in the attack.

"Never forget" is carved in stone on the floor.

For the relatives of those they killed, April 20 evokes a mix of emotions from sorrow and anguish to fond memories of loved ones.

Betty Shoels, the aunt of murdered student Isaiah Shoels, said her 18-year-old nephew was a fun-loving athlete who was always smiling, despite feeling out of place as one of the school's few African-American students.

"What I miss most is his laugh," Shoels told Reuters. "He was just a great kid who loved to joke."

This year's remembrances were marred this week when a Florida teenager, who authorities said was "obsessed" with Columbine, traveled to Colorado where she died of an apparent self-inflicted gunshot.

Dean Phillips, the special agent in charge of the FBI's Denver office, said 18-year-old Sol Pais had made comments in the past that expressed "an infatuation" with the Columbine massacre and its perpetrators.

Authorities had mounted a massive search for Pais after she travelled from Florida to Colorado, bought a pump-action shotgun and ammunition.

Colorado authorities, who said Pais was armed and considered "extremely dangerous," had ordered around half a million students to stay at home "due to ongoing safety concerns."

Evan Todd was a sophomore at Columbine two decades ago when he was wounded in the school library, where 10 of the students were killed. He said whenever he hears of school shootings or other tragedies somehow linked to Columbine, it reminds him that he was "part of something so gruesome and so public."

He often recalls his football teammate Matt Kechter, who was shot dead just a few feet away from him.

"Sometimes I wonder what Matt would be doing now, what is life would be like," said Todd, 35, who is the father of a one-year-old son.

He credits his family and Christian faith for getting him through the months following the tragedy.

"I'm just thankful that I survived," he said.

There have been more than a dozen other shootings at schools across the U.S. since Columbine.

Only last year, 17 students and staff were killed when an ex-pupil went on the rampage at Marjory Stoneman Douglas High School in Florida, while 27 people, mostly children, were killed at Sandy Hook elementary school in 2012 and 32 at Virginia Tech university in 2007.

"You would have thought someone would have come with more gun laws or require (a) mental health workout before you are allowed to buy a gun," said Duran, who was 15 when the attack happened.

"But nothing of that sort happened. So I have just been angry and pissed off."
RELATED TOPICS