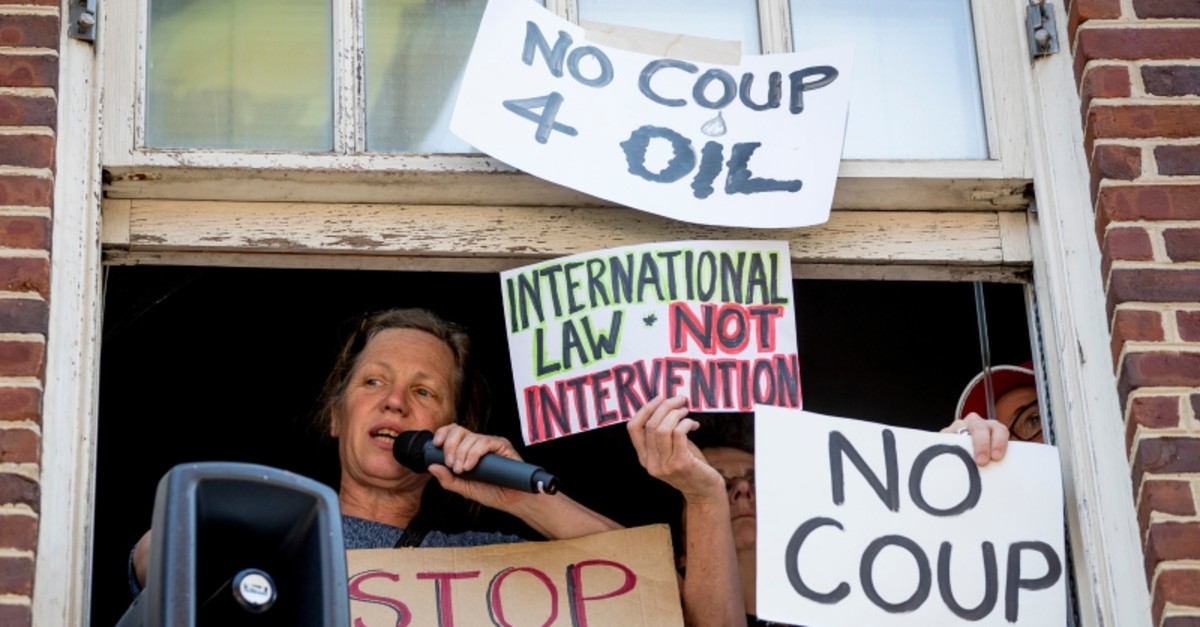 Maduro supporters hold signs and speak with a bullhorn from the second floor window of the Venezuelan Embassy in Washington, Thursday, May 2, 2019. (AP Photo)
by May 03, 2019 1:14 am

U.S. President Donald Trump's tough approach to Venezuela has won broad support from both Republicans and Democrats in the U.S. Congress, but this rare display of bipartisan consensus is starting to show signs of strain as the crisis in the OPEC nation drags on.

Members of both parties remain in agreement that Venezuela's socialist President Nicolas Maduro must go. They credit the Trump administration for helping to forge an international coalition that recognized opposition leader Juan Guaido as the country's interim president.

But after Guaido's latest calls for a military uprising and street protests failed to oust Maduro this week, some Democrats urged the administration to work more closely with foreign allies to choke off Maduro's cash flow and to tone down its rhetoric, particularly threats of military action.

Cracks in bipartisan cooperation on Venezuela - a rare bright spot for the Republican president, who has seldom drawn support for his policies from across the aisle - came amid signs of disappointment within the administration over what many had hoped would be a turning point in the crisis.

"The sanctions that we have are unilateral. They're important," Menendez told reporters. But the United States should "internationalize" those sanctions, he said, by expanding them to Russia and Cuba.

Most Western countries have backed Guaido, but Maduro retains the support of Venezuela's major creditors Russia and China, as well as regional allies like Cuba and Bolivia.

Democratic Representative David Cicilline urged legislation to bar Trump from any military action without congressional approval. Under current laws, a U.S. president has broad powers to order military action. With Republicans controlling the Senate, new legislation to curb that power is unlikely in the short-term.

Cicilline also said administration officials should stop making statements that could be used as "propaganda" by Maduro's supporters.

The administration should "sort of dial back that kind of rhetoric," he said at the House of Representatives.

A few Republicans see a role for the U.S. military. Republican Senator Rick Scott of Florida said U.S. forces should be put in a position to help move aid convoys into Venezuela.

However, there is deep skepticism whether Trump, who is trying to extract the United States from Syria and Afghanistan, is ready to commit to new foreign conflict. Most Latin American partners have already made clear they oppose the idea. "The United States is at its strongest and most legitimate when we are standing shoulder to shoulder with our Latin American and European allies," said Democratic Representative Tom Malinowski, a former State Department official. "So whatever we do going forward, stick with that approach."

He also called on the administration to temper its public pronouncements. "This is a genuine popular democratic uprising," Malinowski told Reuters. "It's not led by the United States. But we should not be saying things from Washington that create even the slightest impression to the contrary."

Guaido invoked the constitution in January to assume the interim presidency, arguing that Maduro's 2018 re-election was illegitimate. Maduro calls Guaido a U.S. puppet seeking a coup.

Guaido called for Venezuelans to take the streets on Wednesday in another bid to force Maduro from power, but the coup attempt fell flat.

Asked whether he was disappointed with the outcome, U.S. Senator Marco Rubio, who has played a key role in pushing Trump's anti-Maduro approach, told Reuters: "No, because I think it's a mistake to view it as a one-day event."

U.S. officials said on Tuesday that three top Maduro loyalists purportedly had been in negotiations with the opposition to turn against Maduro but then reneged.

Maduro and key military figures made a show of unity in a television broadcast on Thursday.