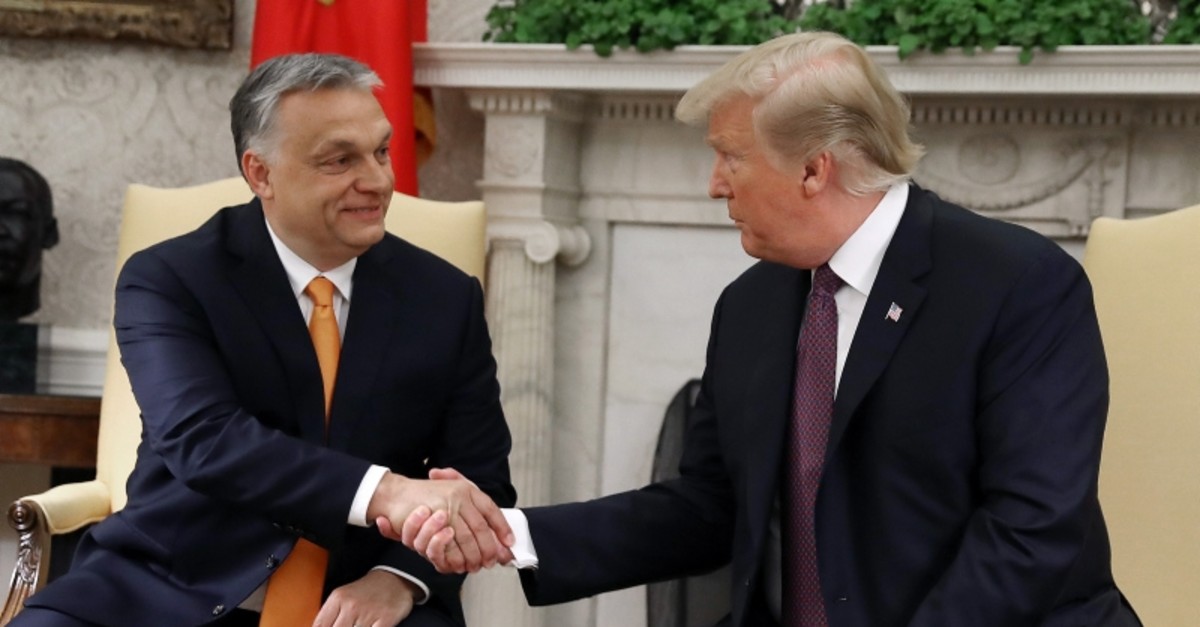 U.S. President Donald Trump shakes hands with Hungarian Prime Minister Viktor Orban during a meeting in the Oval Office on May 13, 2019 in Washington, DC.
by May 14, 2019 1:45 am

Orban has "done the right thing, according to many people, on immigration," Trump said, after hailing his guest as a tough man who was "highly respected" in Europe. He said Orban was keeping Hungary safe.

"I'm very proud to stand together with the president of the United States on fighting against illegal migration, and terrorism, and protecting Christian communities all around the world," Orban said.

The visit is controversial, with leading members of both US parties in the Senate having warned ahead of time that under Orban, Hungary's democracy has "significantly eroded."

Orban brushed aside reporters' questions about repression in his country, saying his government had been repeatedly elected by the people.

Trump did not press Orban in front of the cameras about his country's defence spending, which is well below the 2-per-cent-of-GDP pledge that the US president regularly criticizes NATO allies for failing to meet.

Before the meeting, a senior US official highlighted Hungary's low defence spending and promised the issue would come up in talks, along with European dependency on Russian energy and US concerns over the rise of Chinese tech companies.

In an interview with The Atlantic magazine, the US ambassador to Hungary, David Cornstein, was asked about Orban embracing the term "illiberal democracy" to describe his own government.

"I can tell you, knowing the president for a good 25 or 30 years, that he would love to have the situation that Viktor Orban has, but he doesn't," Cornstein was quoted by the magazine as saying in an article published last week.

Both have been tough on immigration and at times vilified migrants while embracing a form of nationalism that critics say has edged into xenophobia. They have also attacked George Soros, the US-Hungarian liberal Jewish philanthropist.

US officials said they do remain concerned about anti-Semitism across Europe, including in Hungary, and a general stance by Orban against migrants.

He and Orban were both "a little bit controversial, but that's okay," Trump said wryly to reporters at the White House. This is the first visit by a Hungarian premier to the building in 14 years.