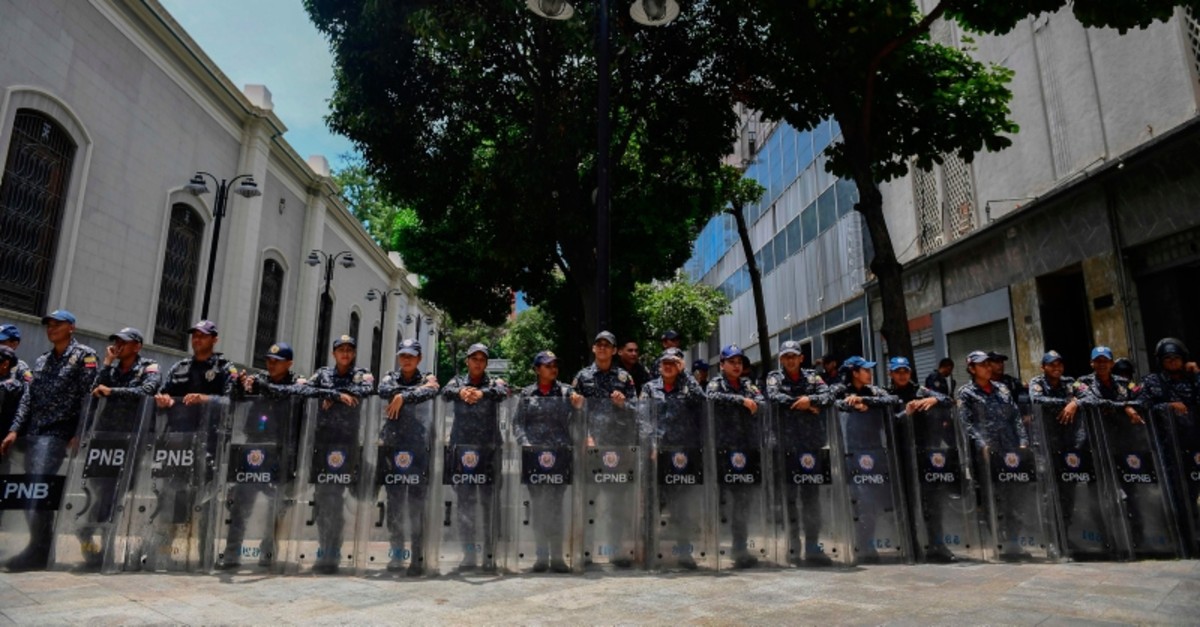 Members of Venezuela's Bolivarian National Police stand guard in the surroundings of the Federal Legislative Palace in Caracas on May 14, 2019. (AFP Photo)
by May 14, 2019 9:42 pm

Venezuelan security forces prevented opposition lawmakers from entering the parliament building for a session on Tuesday, a week after the top court stripped several lawmakers of their immunity amid a political crisis in the South American country.

Members of the Sebin intelligence service, wearing masks and carrying long guns, together with members of the national police and the military blocked the entrance and were investigating the possible presence of an explosive device inside the National Assembly building, lawmakers said.

Last week, one opposition lawmaker was arrested and several took refuge in foreign embassies in Caracas or fled the country as President Nicolas Maduro cracked down on allies of opposition leader Juan Guaido, following a failed effort to convince members of the military to rise up against Maduro in late April.

Guaido, the leader of the opposition-controlled Assembly, in January invoked Venezuela's constitution to assume an interim presidency, arguing Maduro's 2018 re-election was illegitimate. More than 50 countries have recognized him as the country's rightful leader, and say the assembly is its last remaining democratic institution.

"This is all part of a show to prevent the National Assembly from functioning," lawmaker Juan Pablo Guanipa told Reuters. "This is a dictatorship that goes after dissidents, and we are fighting for a political change."

Venezuela's information ministry, which handles media inquiries on behalf of the government, did not immediately respond to a request for comment. Maduro, a socialist, calls Guaido a puppet of the United States seeking to oust him in a coup.

The government stripped the assembly of most of its powers after the opposition won a majority in 2015 elections. Lawmakers loyal to Maduro generally do not attend the sessions, but go to meetings of the constituent assembly, a legislative "superbody" created in 2017 that meets in the same building on Wednesdays.

The "superbody" is an all-powerful legislature controlled by the ruling Socialist Party and whose powers supersede those of the National Assembly.

Tuesday's session was scheduled for 10 a.m. (1400 GMT), but never began. The lawmakers were set to discuss the Supreme Court's stripping of several of their colleagues' parliamentary immunity and the arrest of Edgar Zambrano, the Assembly's vice president and an outspoken critic of Maduro.

Opposition lawmaker Jorge Millan told reporters the report of "bombs" in the building was false.

"It is a trick to prevent the parliament from functioning today," he said. "If we do not have a session today, we will do it tomorrow."