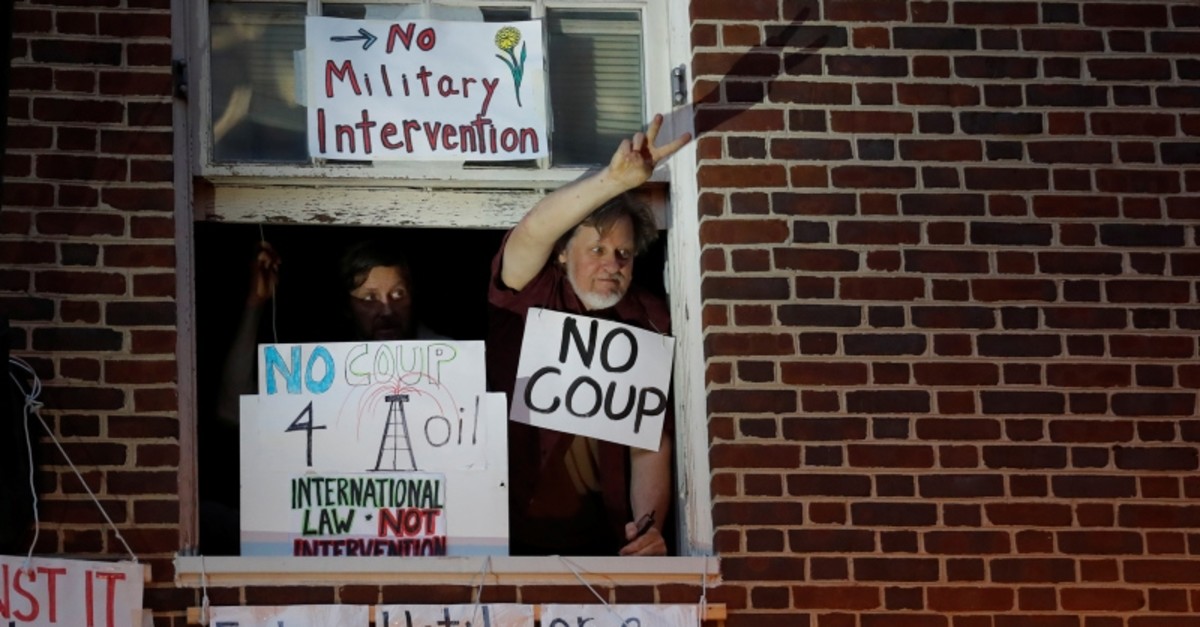 A supporter of Venezuelan President Nicolas Maduro, is seen at the window of the Venezuela embassy before U.S. Secret Service police evict and arrest the final four supporters to end their multi-week occupation, in Washington, May 13, 2019. (Reuters)
by May 16, 2019 7:44 pm

U.S. law enforcement officers raided the Venezuelan Embassy on Thursday to oust a small group protesting U.S. policy toward the oil-rich country, paving the way for the diplomatic compound to be handed to the U.S. envoy of opposition leader Juan Guaido.

Since mid-April, members of three activist groups have been occupying the embassy, a red brick building in the upscale Georgetown neighborhood of Washington, where they say they are "invited guests" of the Venezuelan government.

The activists oppose U.S. intervention in Venezuela to oust President Nicolas Maduro in favor of Juan Guaido, the Venezuelan opposition leader and self-proclaimed interim president of the OPEC-member nation.

Authorities arrested the last four protesters on Thursday after utilities for the building were cut off and they ignored an eviction order, the groups say.

A spokesman for Pepco, Washington's energy utility, said the company does not discuss service to individual properties.

A U.S. State Department spokeswoman said the government of Guaido, who the United States recognizes as the leader of Venezuela, asked for U.S. assistance in removing the protesters from the embassy.

"The Venezuelan government, led by Interim President Juan Guaido ... has asked the trespassers to depart the premises," the spokeswoman said.

Neither agency identified what charges the protesters faced.

Tensions have escalated between the United States and Venezuela as Washington has ratcheted up pressure against the government of Maduro, which it says is illegitimate.

The United States has imposed sanctions against Venezuelan leaders, ordered the withdrawal of diplomatic personnel from Venezuela in March and, on Wednesday, suspended passenger and cargo flights between the United States and Venezuela.

Maduro, who has branded Guaido a U.S. puppet seeking to oust him in a coup, broke off relations with Washington after it recognized Guaido and recalled diplomatic and consular staff.

Representatives of Guaido took control of three of the country's diplomatic properties in the United States in March.

At its peak, about 50 people from three groups occupied the Venezuelan Embassy, according to Medea Benjamin, a co-founder of Code Pink, one of the groups involved.

Meanwhile, supporters of Guaido have mounted their own protests outside the embassy. Following Thursday's arrests, dozens of the opposition government's supporters celebrated in the streets.

"The liberation of our embassy was thanks to the fight of the Venezuelan diaspora," Carlos Vecchio, Guaido's representative in Washington, wrote on Twitter. "Next liberation: Venezuela."

Benjamin said the activists will continue to protest in what she says is a bid to ease tensions between the two countries. "This issue is not over yet," she said.