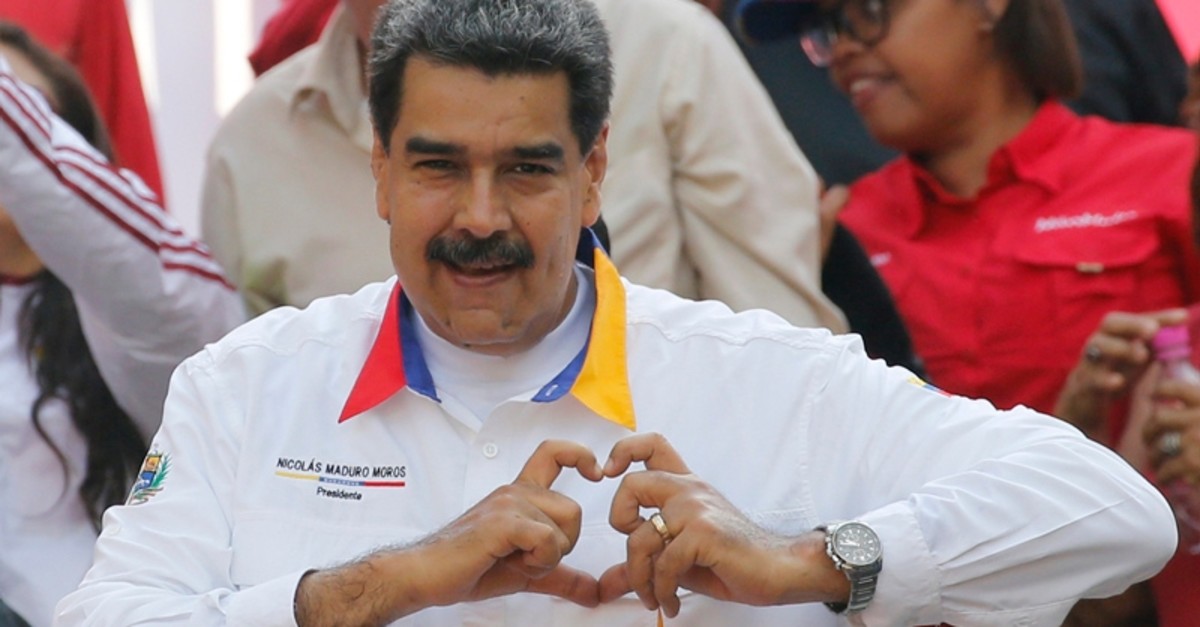 Venezuela's President Nicolas Maduro gestures a heart symbol to supporters outside Miraflores presidential palace in Caracas, Venezuela, Monday, May 20, 2019. (AP Photo)
by May 21, 2019 12:24 am

Venezuelan President Nicolas Maduro on Monday proposed early elections for the National Assembly, which is headed by opposition leader Juan Guaido and is the sole body recognized as democratically legitimate by most Western nations.

The opposition won a majority in the National Assembly in 2015 and the next congressional elections are currently scheduled for late 2020. Maduro did not give an exact new date, and he has previously said he would shift them earlier, without following through.

In a speech at a pro-government rally, Maduro said "we will legitimize the sole institution which has not been legitimized in the last five years."

Most western nations have recognized Guaido as the country's rightful head of state, after Maduro won re-election last year in a vote widely deemed fraudulent, and stacked other state bodies with loyalists.

Guaido invoked the constitution to assume an interim presidency in January, denouncing Maduro as a usurper whose failed state-led policies had plunged Venezuela into its deepest-ever economic recession.

Maduro accuses Guaido of staging a U.S.-backed coup against his socialist administration and says he will face justice. Maduro retains control of state functions and the support of the military's top brass, as well as allies Russia, Cuba and China.

"We are going to measure ourselves electorally ... we are going to bring forward elections of the National Assembly," Maduro told a crowd of red-shirted supporters on Monday.

On April 30, Guaido attempted to rally Venezuela's armed forces to rise up against Maduro, but only a few dozen soldiers and one top government official defected while the military top brass reaffirmed their loyalty.

Intelligence agents have detained several Guaido allies and the Supreme Court has accused 14 opposition lawmakers of crimes including treason and conspiracy, prompting most to flee abroad or take refuge in friendly embassies in Caracas.

The Venezuelan opposition's envoy to the United States, Carlos Vecchio, said on Monday he had met Pentagon and State Department officials in Washington on Monday to discuss "all aspects of the Venezuelan crisis."

Vecchio said in a message on Twitter that the talks held at the State Department had been "very positive" but offered no further details. "We continue to advance," he said.

President Donald Trump and senior aides have not ruled out military action in the crisis-stricken South American country, repeatedly saying that "all options are on the table."

But Washington has made clear it prefers to exert continued economic and diplomatic pressure to push Maduro out, and many experts have said the U.S. use of military force is unlikely.