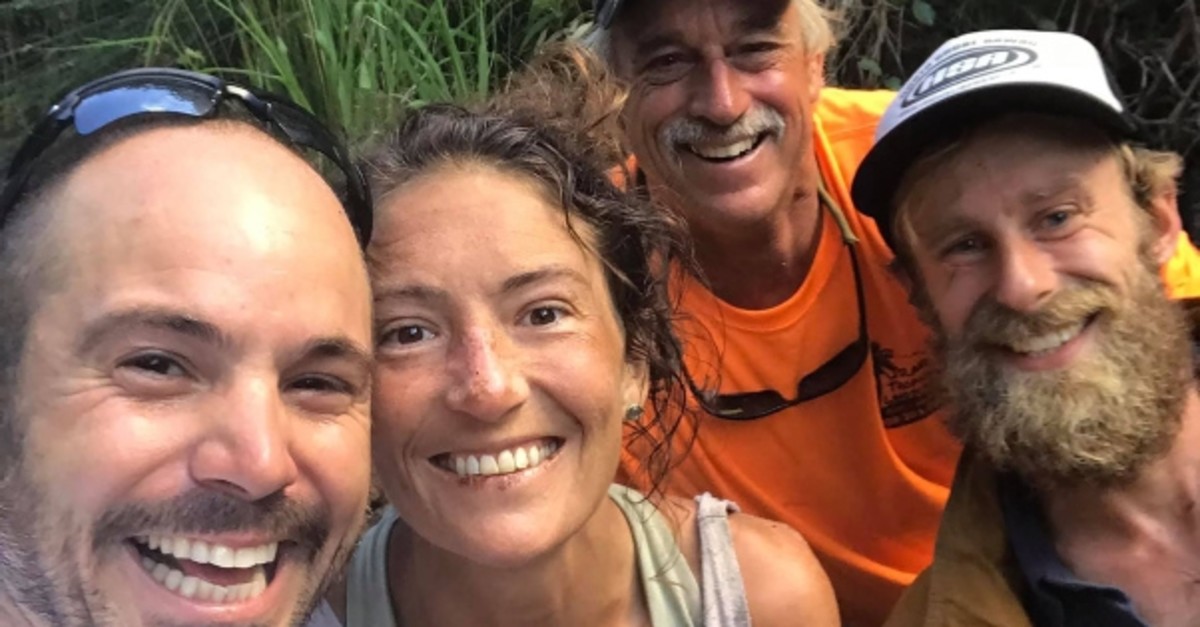 In this image courtesy of Javier Cantellops and obtained at facebook.com/AmandaEllersMissing/, shows missing hiker Amanda Eller with her rescuers, (L-R) Cantellops, Troy Helmer and Chris Berquist, on May 24, 2019 on the island of Maui. (AFP Photo)
by Compiled from Wire Services May 25, 2019 6:01 pm

An American yoga instructor who spent two weeks lost in the wilds of Hawaii and survived on plants and water has been found alive.

Amanda Eller, 35, was rescued Friday beside a creek bed at the bottom of a ravine in the Makawao Forest Reserve on Maui after she was spotted by a helicopter.

The physical therapist from the Maui town of Haiku had been out on a hike when she vanished.

Her disappearance prompted a social media campaign to boost efforts to find her.

"Amanda has been found. She got lost and was stuck and slightly injured in the forest - way way out," reads a posting on a "Find Amanda" Facebook page created after her disappearance on May 8.

Eller has been in the hospital since her rescue.

A grassroots fund-raising campaign collected more than $70,000, and this allowed a helicopter to be chartered to look for her.

Eller's boyfriend was the last to see her. Police found her car at a parking lot near a hiking trail with her phone and wallet inside. Hundreds of volunteers have searched for her since.

"She is just as strong as we always said she would be. We knew she could make it this long," people close to her wrote on the Facebook page, which was followed by more than 20,000 people.

During her ordeal, Eller lost around seven kilos (15 pounds), Javier Cantellops, one of the people who set out to search for her, told CNN. Eller's mother Julia said she suffered a fractured leg.

Cantellops said he was searching for Eller from a helicopter along with Chris Berquist and Troy Helmers when they spotted her about 3:45 p.m. near the Kailua reservoir, according to Maui Police Department spokesman Lt. Gregg Okamoto and the Honolulu Star-Advertiser.

It's unknown how or to what extent Eller was injured, as well as how she survived until she was found.

The Honolulu newspaper also reported that a photo was posted to a Facebook page tracking the search, showing a smiling Eller with what appeared to be injuries to her face and dirt on her clothing. The photo shows Eller surrounded by Cantellops, Berquist and Helmers.

"This search and rescue was truly a community collaboration of Maui County first responders, family, friends and community volunteers," Victorino said in a statement. "I extend my deepest appreciation for everyone involved in searching for and locating Amanda. Your work, determination and sacrifice has helped return her to her loving family. God bless them all."