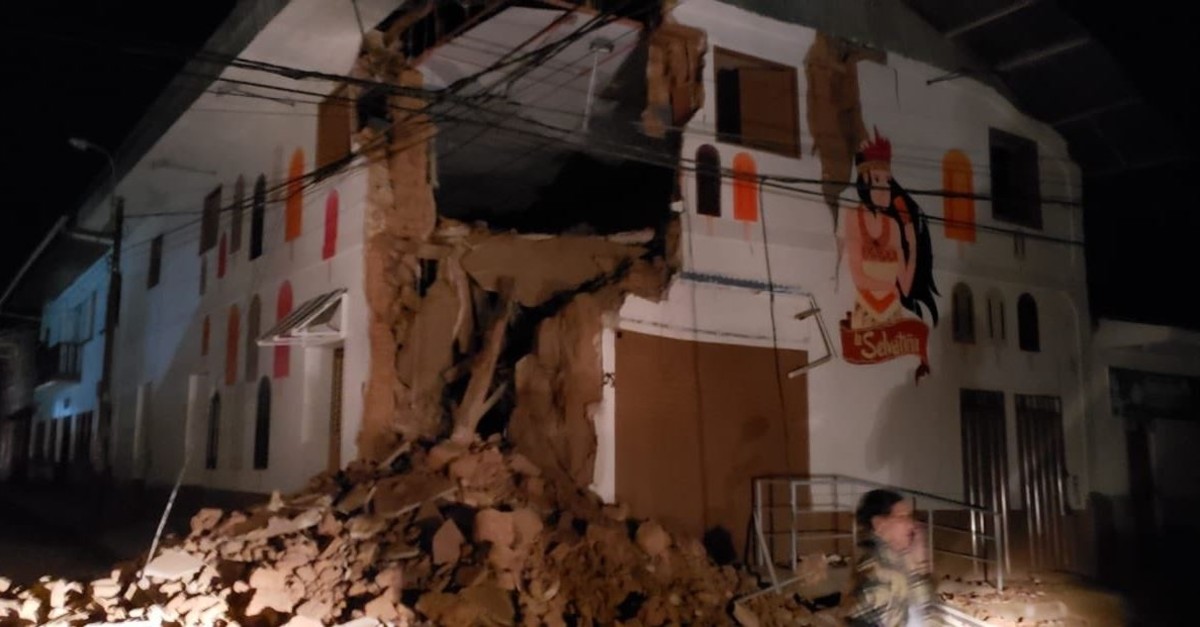 A powerful 8.0-earthquake struck northern Peru in the early hours of Sunday, killing one person and injuring 18 others as the shockwave extended into neighboring Ecuador.

The force of the quake brought down many old houses in Yurimaguas, a town near the epicenter in a lightly populated area of Peru's Amazon basin, the town's mayor Hugo Araujo said.

The quake was felt over a wide area. In Lima and other cities frightened residents rushed into the streets.

Civil defense coordinator Ricardo Seijas told RPP radio in Peru that a man was killed by a rock that fell on his house in the region of Cajamarca.

The quake blocked roads, damaged a bridge, and knocked down houses, Peru's President Martin Vizcarra, who said it was the most powerful quake to hit the country in 12 years.

"It is an earthquake affecting the entire Peruvian jungle," he said.

"We are coordinating to establish an air bridge to transport people who have an emergency," he said.

The quake struck about 75 kilometers (45 miles) southeast of the town of Lagunas and toward the border with Brazil, at a depth of at least 110 kilometers.

The US Geological Survey said the quake registered 8.0 in magnitude. The Institute of Geophysics of Peru, which uses a different scale, measured it at 7.5 on the Richter scale and said it lasted just over two minutes.

The mayor of Lagunas, Arri Pezo, said many residents who fled from their homes later stayed in the streets for fear of aftershocks.

"You could not walk at the time of the earthquake, things were falling," Pezo told the RPP radio. Power was knocked out, making it difficult to assess the damage, he said.

Araujo, the mayor of Yurimaguas, said, "there are many old houses that have collapsed after this strong earthquake."

The USGS said the impact "should be relatively localized."

Quakes of similar depth "typically cause less damage on the ground surface (but)... may be felt at great distance from their epicenters," it later added.

The USGS put the depth at 110 kilometers, while the Institute of Geophysics of Peru said it was 141 kilometers deep.

Experts at the U.S.-based Pacific Tsunami Warning Center said there was "no tsunami threat because the earthquake is located too deep inside the earth."

The shockwave of Sunday's tremor also extended to neighboring Ecuador, where power cuts were reported in parts of the Amazon region.

Peruvian media said the tremor was also felt in parts of Colombia and Venezuela.

Peru lies on the so-called Ring of Fire -- an arc of fault lines that circles the Pacific Basin and is prone to frequent earthquakes and volcanic eruptions.

The South American country records about 200 earthquakes a year, most of them going unnoticed by the public.

In February a quake measuring 7.5 with its epicenter in Ecuador rattled the coast and Amazon region of northern Peru.

It left nine people injured and caused damage in Ecuador, but Peru was unscathed.