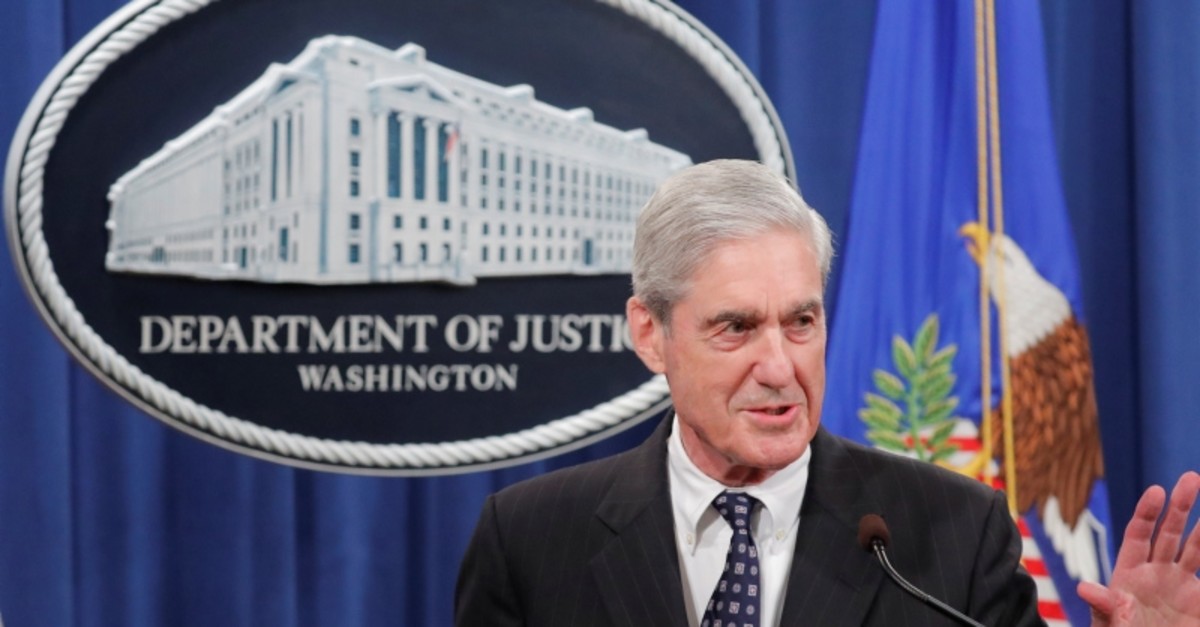 U.S. Special Counsel Robert Mueller delivers a statement on his investigation into Russian interference in the 2016 U.S. presidential election at the Justice Department in Washington, U.S., May 29, 2019. (Reuters Photo)
by Associated Press May 29, 2019 6:53 pm

Special counsel Robert Mueller said Wednesday he believed he was constitutionally barred from charging President Donald Trump with a crime but pointedly emphasized that his report did not exonerate the president. He cautioned lawmakers who have been negotiating for his public testimony that he would not go beyond his report in the event he appears before Congress.

The comments were Mueller's first public statements since his appointment as special counsel two years ago.

Trump, who has repeatedly and falsely claimed that Mueller's report cleared him of obstruction of justice, modified that contention somewhat shortly after the special counsel's remarks. He tweeted, "There was insufficient evidence and therefore, in our Country, a person is innocent. The case is closed!"

Mueller's statement came amid demands for Mueller to testify on Capitol Hill about his findings and tension with Attorney General William Barr.

Barr has said he was surprised Mueller did not reach a conclusion on whether the president had criminally obstructed justice, though Mueller in his report and again in his public statement Wednesday said that he had no choice because of a Justice Department legal opinion that says a sitting president cannot be indicted.

Mueller, for his part, complained privately to Barr that he believed a four-page letter from the attorney general summarizing his main conclusions did not adequately represent his findings.

Mueller announced his resignation from the Justice Department on Wednesday so that he can "return to private life."

Mueller's statement was expected to be relatively brief, about eight minutes, and Attorney General William Barr was given a heads-up about what he would say, according to people who were not authorized to provide details on the record and spoke on condition of anonymity.

Mueller and Barr have been at odds over the attorney general's handling of the special counsel's report on Russia's interference in the 2016 election and the possibility that Republican candidate Donald Trump's campaign cooperated with the Russians' efforts to help him win.

Any public statement from Mueller would be extraordinary since his office has been famously tight-lipped throughout the investigation, and the special counsel himself has made no public statements since his May 2017 appointment. His spokesman has only rarely commented to confirm logistical or staff announcements, to announce the filing of public charges and to dispute one published report earlier this year.

House Democrats want Mueller to testify publicly, though no date or arrangements have been set, and it's not clear that he will.

Mueller's report into meddling in the 2016 campaign did not find that the Trump campaign coordinated to sway the presidential election. But, despite Trump's repeated assertions to the contrary, it did not reach a conclusion on whether Trump had obstructed justice.

Mueller said in his report that he did not think it would be fair to publicly accuse the president of a crime if he was not going to charge him. A Justice Department legal opinion says sitting presidents cannot be indicted, and Mueller made clear in his report that that opinion helped shape the investigation's outcome and decisions.

Barr has said he was surprised that Mueller did not reach a conclusion, and he decided with Deputy Attorney General Rod Rosenstein that the evidence did not support an obstruction of justice allegation.

Mueller, for his part, privately complained to Barr that a four-page letter the attorney general wrote summarizing his main conclusions did not adequately capture the investigation's findings. Barr called Mueller's letter "snitty" in congressional testimony this month in which he defended his decision to reach a conclusion on obstruction in place of Mueller.

Barr is currently in Alaska for work and is scheduled to participate in a round table discussion with local leaders in Anchorage later in the day.

A senior White House official said "the White House was notified" Tuesday night that Mueller might make a statement Wednesday.