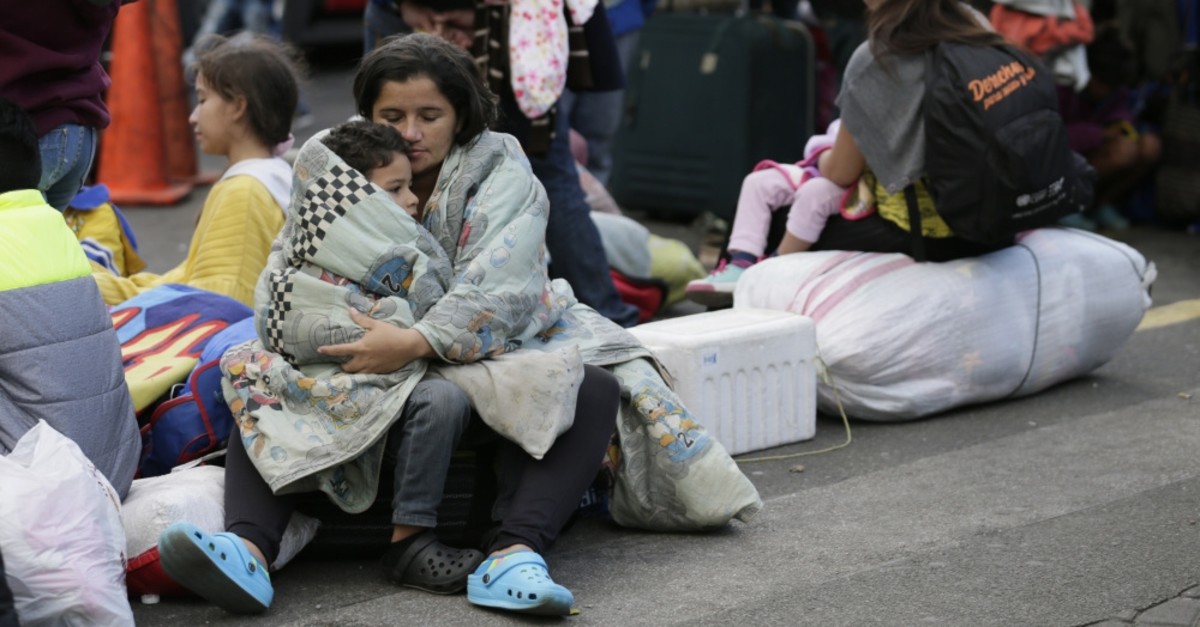 Venezuelan migrants wait outside an immigration processing office on the Rumichaca bridge, Ecuador, June 12, 2019.
by Daily Sabah with Agencies
Jun 17, 2019 12:24 am

Thousands of Venezuelans bear the brunt of the humanitarian crisis that has been exacerbated by the U.S.-led campaign against the democratically elected President Nicolas Maduro

Amid the ongoing refugee crisis in Venezuela, thousands of Venezuelans, desperately attempting to cross the border, now face harsh conditions from neighboring countries. Peru, which had been known as one of the most welcoming destinations for migrants in South America, is the latest South American country to tighten its border policy for Venezuelans.

Dozens of riot police stood guard at Peru's northern border on Saturday, hours after new entry measures requiring Venezuelan migrants to hold a passport and humanitarian visa took effect. More than 9,000 Venezuelans entered the country with just their national ID cards on Friday, the highest number ever recorded by Peruvian immigration authorities. Human rights groups in the country have criticized the move, describing it as an attempt to decrease the numbers of needy people who are entering. According to Peruvian authorities, more than 820,000 Venezuelans have settled in Peru since 2016 of which 270,000 have sought refugee status.

Peru has become a safe haven for Venezuelans fleeing a political crisis and a collapsing economy. The instability has triggered a migration crisis in South America, with Venezuela's neighbors, Colombia and Ecuador, struggling with the massive surge of immigration. Four million Venezuelan refugees and migrants have fled an economic and political crisis, all but 700,000 of them since the end of 2015, U.N. aid agencies said earlier this month.

The Organization of the Petroleum Exporting Countrie (OPEC) member's imploding economy has brought widespread shortages of basic foods and medicines. The crisis has deepened since the U.S. imposed sanctions, including on the pivotal oil industry, favoring opposition leader Juan Guaido in an effort to oust democratically elected President Nicolas Maduro. U.S. President Donald Trump's strong backing for Guaido has not tipped the balance, and the sanctions have failed to dislodge Maduro while exacerbating the humanitarian crisis.

Humanitarian aid has become the centerpiece of the standoff between President Maduro and Guaido, who has declared himself interim president. President Nicolas Maduro has blamed U.S. sanctions for Venezuela's economic problems, but Guaido says government corruption and mismanagement are at fault. Maduro has accused the U.S. of plotting an invasion. He accused U.S. National Security Adviser John Bolton of overseeing a plot to replace him with a dictator. He alleged that Washington is using "dirty dollars, bled from the U.S. empire" to train 734 mercenaries in neighboring Colombia to carry out the plot.

The Venezuelan leader began a second six-year term on Jan. 10, having won elections in May that were boycotted by the opposition and rejected by 12 Latin American nations, including Colombia and Brazil. Turkey, Russia, Iran, Cuba, China and Bolivia reiterated their support for Maduro, who vowed to cut ties with the U.S. following the worsening diplomatic situation. U.S. President Donald Trump pointed to a military intervention as one possibility among a number of choices he could use to help resolve the crisis.