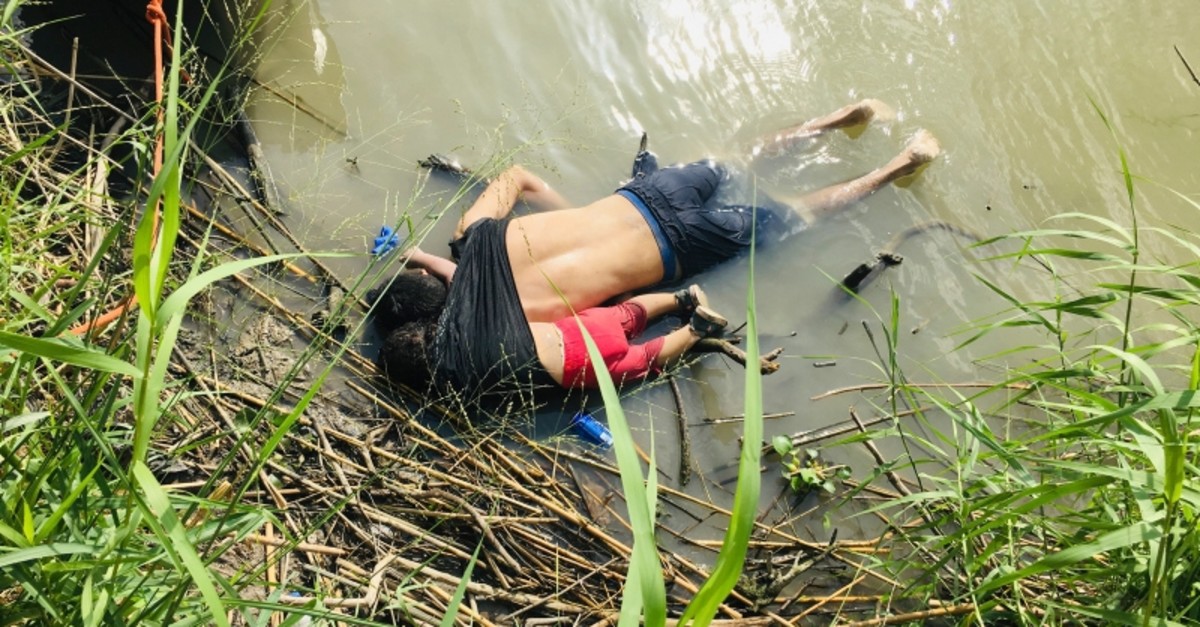 The bodies of Salvadoran migrant Oscar Alberto Martu00ednez Ramu00edrez and his nearly 2-year-old daughter Valeria lie on the bank of the Rio Grande in Matamoros, Mexico, Monday, June 24, 2019. (AP Photo/Julia Le Duc)
by Daily Sabah with Agencies
Jun 26, 2019 11:16 am

Shocking images of a drowned Salvadoran migrant and his two-year-old daughter who died while trying to cross the Rio Grande River from Mexico to the United States have sparked outrage in the U.S. and Central America, underscoring the dangers faced by asylum-seekers.

Twenty-five-year-old Oscar Martinez Ramirez fled El Salvador with his 21-year-old wife and their daughter Valeria and decided to make the risky crossing from Mexico to the U.S. on Sunday afternoon out of desperation because the family was unable to request U.S. asylum, according to a report by Mexican newspaper La Jornada.

Ramirez carried the little girl on his back, stowing her inside his t-shirt to keep her safe as they attempted to cross the river. But the pair were swept away by violent currents, drowning before her mother's eyes, who survived the ordeal and arrived on shore.

The two bodies were found Monday in Matamoros in Tamaulipas state. A series of haunting photographs show the young father and child lying face-down in water, with the daughter's arm still wrapped around her dad's neck.

On social media, some said the images brought to memory another haunting photo taken halfway across the world – that of 3-year-old Syrian refugee Aylan Kurdi, whose body washed up on a Turkish beach at the height of the migrant crisis in 2015.

The images of Aylan, wearing a red T-shirt, blue shorts and black shoes, and lying face-down in the surf, sparked outcry around the world and led to demands that more should be done to protect those making the perilous journey from the Middle East and North Africa to Europe.

"The crisis that was once 'over there' has found its way here, and we need a solution," an American Facebook user commented on a comparison of the two heart-rending images.

Others placed blamed for the deaths on U.S. President Donald Trump, whose administration has refused to respond to the needs of migrants on the border.

"As a father, this image makes me physically ill. This migrant drowned with his 2-year-old daughter clinging to his body. This is on you, @realDonaldTrump. May your political end be swift and soon," one Twitter user wrote.

The photographs have also stirred anger in El Salvador and Mexico, where the government had faced sharp criticism for its treatment of migrants.

"Very regrettable that this would happen," Mexican President Andres Manuel Lopez Obrador said Tuesday in response to a question about the photograph. "We have always denounced that as there is more rejection in the United States, there are people who lose their lives in the desert or crossing" the river.

Obrador, a leftist who took office in December vowing to protect migrants' rights, has previously come under fire over an AFP journalist's images last week of heavily armed National Guardsmen forcibly detaining two women and a girl at the Rio Grande.

On Tuesday, the Mexican leader said the 15,000 troops his government has deployed to the U.S. border do not have orders to stop migrants from crossing, and vowed to investigate the controversial detention.

International law protects the right of undocumented migrants to cross borders to seek asylum, and Mexico has not typically stopped them from doing so at its northern border.

But Lopez Obrador is facing pressure from Trump on the issue, and his government is eager to show results and avoid the punitive tariffs the U.S. leader threatened last month to impose on Mexican goods.

On June 7, the two countries reached an agreement, with Mexico agreeing to reinforce its southern border with 6,000 National Guardsmen. Washington has given Mexico 45 days to take action.

From the scorching Sonoran Desert to the fast-moving Rio Grande, the 2,000-mile U.S.-Mexico border has long been an at times deadly crossing between ports of entry. A total of 283 migrant deaths were recorded last year; the toll so far this year has not been released.

In recent weeks alone, two babies, a toddler and a woman were found dead on Sunday, overcome by the sweltering heat; elsewhere three children and an adult from Honduras died in April after their raft capsized on the Rio Grande; and a 6-year-old from India was found dead earlier this month in Arizona, where temperatures routinely soar well above 38 degrees Celsius (100 degrees Fahrenheit).