Brazil's Bolsonaro says he may nominate son as envoy to US 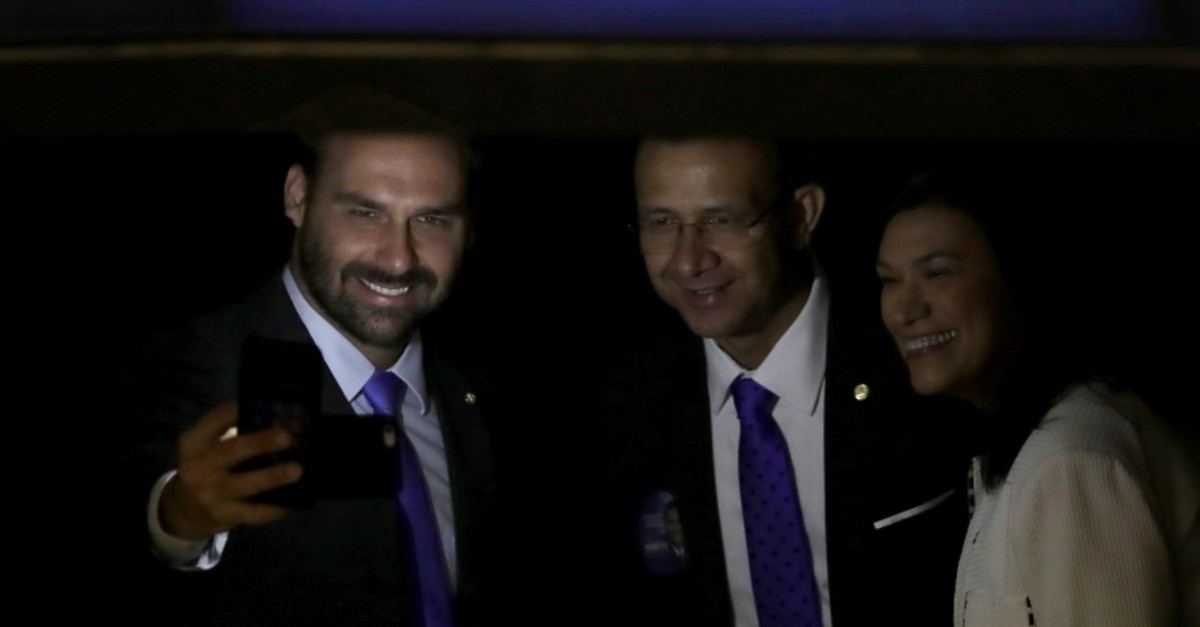 Brazilian President Jair Bolsonaro says he's considering nominating his son to be ambassador to the United States, raising a storm of complaints Friday alleging nepotism and questioning his qualifications.

Eduardo Bolsonaro, who is currently a congressman, met with Foreign Minister Ernesto Araujo on Friday and told reporters that the minister "expressed support" for his nomination.

The president himself said Thursday that such a nomination "is something on my radar," and ticked off a list of his son's qualifications for the post: "My son Eduardo speaks English, he speaks Spanish. He's travelled all over the world. He's friends with Donald Trump's children."

"My understanding is that he could be a qualified person and would be the perfect message to Washington," Bolsonaro added.

On Friday, Bolsonaro said in a Facebook Live that he "is not concerned" about the criticism he was receiving over the nomination idea.

But it sent off an uproar among opposition lawmakers.

"It's absurd that he's even being considered. Bolsonaro wants to govern in his backyard, extending (the government) to his family.... Eduardo Bolsonaro's nomination for ambassador is unacceptable," tweeted Senate opposition leader Randolfe Rodrigues.

He called the move "unprecedent in the history of Brazilian diplomacy" and said he was "certain" the Senate would not approve the nomination.

Congressman Ivan Valente of the leftist Socialism and Liberty Party said the nomination would be unethical. "This is a complete mess. An international embarrassment," he tweeted.

A 2008 Supreme Court decision prohibits Brazilian authorities from nominating close family members to official posts, but the ruling was vague and Bolsonaro's allies argue it doesn't apply in this case.

When asked by reporters about his qualifications for the position, Eduardo Bolsonaro said he had been in a foreign exchange program where he "fried hamburgers in the United States, in the cold in Maine" and "in the cold in Colorado, on a mountain there."

Eduardo Bolsonaro also noted that he heads the foreign relations commission in the lower house of Congress.

He accompanied his father on his trip to meet Donald Trump at the White House, where he said Brazilians who were illegally living in the United States were "our embarrassment." The statement caused disapproval at home. On the same trip he spoke to reporters wearing a "Trump 2020" baseball hat and also sported a hat that said, "Make Brazil Great Again," a reference to Donald Trump's campaign slogan.

Eduardo Bolsonaro was Brazil's most voted for congressman and plays a key part in his father's political movement.

Oliver Stuenkel, an international relations professor at the Getulio Vargas Foundation University, says Eduardo Bolsonaro being U.S. ambassador would be indicative of the importance Bolsonaro gives to Brazil's relationship with Washington. But he questioned how powerful Eduardo Bolsonaro would be able to be there.

Bolsonaro was sworn in on January 1 and has yet to nominate a US ambassador. The ambassador from the previous administration left the position on June 3.