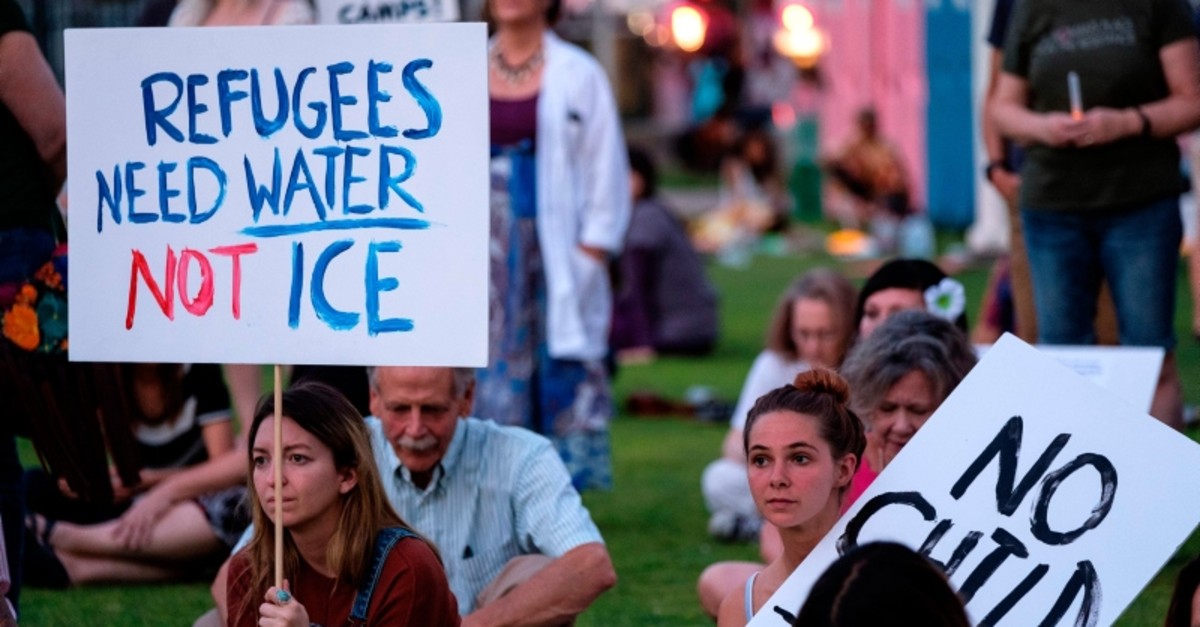 People gather to protest the treatment of immigrants in detention centers during the ,Lights for Liberty: A Vigil to End Human Concentration Camps, event in El Paso, Texas, on July 12, 2019. (AFP Photo)
by Jul 14, 2019 7:18 pm

US cities are bracing for nationwide raids aimed at deporting undocumented immigrants, in what President Donald Trump called a "major operation" due to start on Sunday.

The US Immigration and Customs Enforcement authorities - known as ICE - is expected to focus on large cities such as Los Angeles, New York, Chicago and Houston and will seek to pick up migrants who have received final orders of removal from an immigration judge.

But there was no precise information released about when and where raids would take place. Ken Cuccinelli, the acting director of US Citizenship and Immigration Services under Trump, told CNN he would not reveal operational details.

Cuccinelli said the matter of whether parents and children would be separated during the raids would be an operational detail he could not talk about, and added that he didn't understand why ICE's "everyday job" was prompting headlines.

New York Mayor Bill de Blasio tweeted late Saturday that he had already received reports of "unsuccessful ICE enforcement actions" in the Sunset Park and Harlem neighbourhoods of the city.

Trump has said that Sunday's operation will focus on criminals, such as members of the MS-13 gang, which was founded in Los Angeles and has ties to El Salvador.

But in the cities themselves, government leaders and local action groups ramped up efforts to make undocumented residents aware of their rights and where they can find help.

New York state Governor Andrew Cuomo, in a statement earlier in the week, said the raids would no doubt lead to "collateral arrests" of individuals with no orders of deportation.

Four non-profit organizations, including the American Civil Liberties Union (ACLU), filed a lawsuit earlier in the week calling for those targeted to have their day in court before facing deportation.

The suit argues that the plan for mass arrests targets refugees fleeing El Salvador, Guatemala and Honduras because of threats to their lives from their governments and gangs.

There are around 11 million undocumented people living in the US, according to estimates from the Pew Research Center.

When Trump proposed mass deportations in June, he spoke about "millions" of people being arrested, but according to ICE only around 2,000 people will likely be targeted.