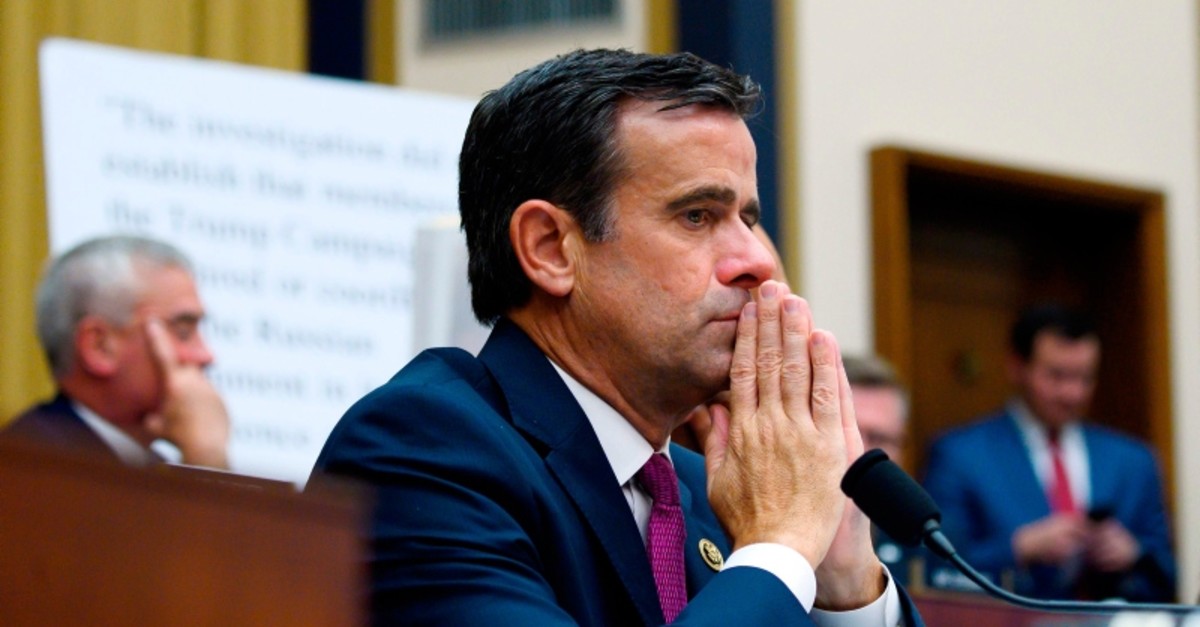 In this file photo taken on July 24, 2019 US Representative John Ratcliffe, Republican of Texas, listens as former Special Counsel Robert Mueller testifies in Washington, D.C. (AFP Photo)
by Compiled from Wire Services Aug 02, 2019 9:25 pm
U.S. President Donald Trump said on Friday his choice for director of national intelligence, Representative John Ratcliffe, has decided to remain in Congress and has withdrawn his name from consideration.

"Our great Republican Congressman John Ratcliffe is being treated very unfairly by the LameStream Media," Trump said of Ratcliffe, a Trump loyalist and former prosecutor who apparently embellished his biography.

"Rather than going through months of slander and libel, I explained to John how miserable it would be for him and his family to deal with these people," Trump said on Twitter. "John has therefore decided to stay in Congress."

Democratic lawmakers and some former senior U.S. intelligence officers have said Ratcliffe, 53, lacked the expertise and experience to replace Daniel Coats as Director of National Security and some have voiced concerns that he would warp U.S. intelligence to support the president's views.

A Trump loyalist who has served for six months on the House of Representatives' Intelligence Committee, Ratcliffe gained attention last week by criticizing former Special Counsel Robert Mueller during a hearing on Mueller's investigation into Russia's interference in the 2016 U.S. election.

Although Ratcliffe had touted his counter-terrorism experience while in the U.S. Attorney's Office for the Eastern District of Texas, media outlets including Reuters have reported on concerns that he may have exaggerated his achievements as a prosecutor.

Ratcliffe confirmed that he had withdrawn his name from consideration. He said he thought the confirmation process would become a partisan battle between Trump's Republicans and opposition Democrats.

"I do not wish for a national security and intelligence debate surrounding my confirmation, however untrue, to become a purely political and partisan issue," Ratcliffe said.

"The country we all love deserves that it be treated as an American issue."