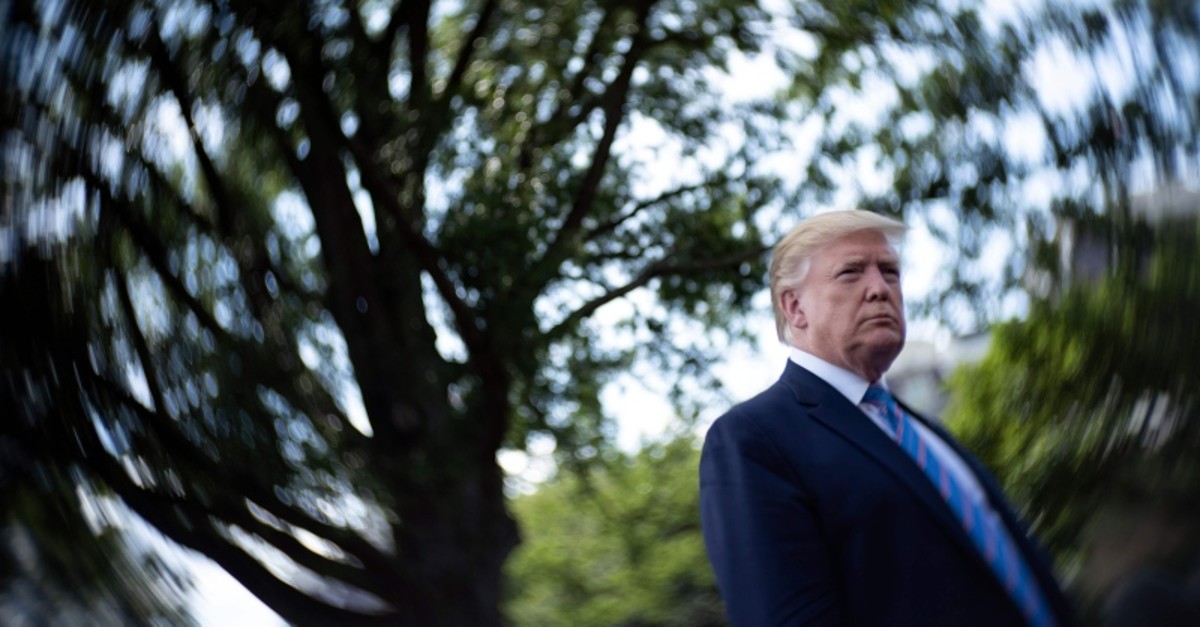 US President Donald Trump speaks to the press while walking to Marine One on the South Lawn of the White House, on August 2, 2019, in Washington, DC. (AFP Photo)
by Associated Press Aug 04, 2019 8:03 pm

As the American nation reeled from two mass shootings in less than a day, U.S. President Donald Trump spent the first hours after the tragedies out of sight at his New Jersey golf course, sending out tweets of support awkwardly mixed in with those promoting a celebrity fight and attacking his political foes.

Trump was to return to Washington on Sunday evening, at which point aides said he would likely address reporters, but the nation did not glimpse the president in the immediate aftermath of a shooting in El Paso, Texas, that killed at least 20 people and, hours later, and one in Dayton, Ohio, that claimed at least nine lives. Never seemingly comfortable consoling a nation in grief, Trump will be carefully watched for his response as authorities investigate whether the El Paso shooter left behind an anti-immigration manifesto that echoes the president's hardline rhetoric about the border, again inviting comparison to his predecessors who have tried to heal the country in moments of national trauma.

In recent weeks, the president has issued racist tweets about four women of color who serve in Congress, and in rallies has spoken of an "Invasion" at the southern border. His reelection strategy so far has placed racial animus at the forefront in an effort that his aides say is designed to activate his base of conservative voters, an approach not seen by an American president in the modern era.

Trump has also been widely criticized for offering a false equivalency when discussing racial violence, notably when he said there were "good people on both sides" after a white supremacist rally in Charlottesville, Virginia, that resulted in the death of an anti-racism demonstrator.

The shootings will likely complicate that strategy, and Democrats who are campaigning to deny Trump a second term were quick to lay blame at the president's feet.

"You reap what you sow, and he is sowing seeds of hate in this country. This harvest of hate violence we're seeing right now lies at his feet," Sen. Cory Booker of New Jersey said on NBC's "Meet the Press." ''He is responsible."

White House aides said the president has been receiving updates about both shootings.

His first tweet after the El Paso shooting on Saturday hit similar notes, with Trump calling it "terrible" and promising the full support of the federal government. But just 14 minutes later, he tweeted again, a discordant post wishing UFC fighter Colby Covington, a Trump supporter, good luck in his fight that evening. That was soon followed up with a pair of retweets of African American supporters offering testimonials to Trump's policies helping black voters, though the president polls very poorly with blacks.

The motive for the Dayton shooting, which happened at a popular nightlife area, was not immediately known. But Democrats pointed to the El Paso attack and blamed Trump for his incendiary rhetoric about immigrants that they say fosters an atmosphere of hate and violence.

Authorities are investigating the possibility the shooting in El Paso was a hate crime, working to confirm whether a racist, anti-immigrant screed posted online shortly beforehand was written by the man arrested in the attack on the border city. The writer expresses concern that an influx of Hispanics into the United States will replace aging white voters, potentially turning Texas blue in upcoming elections and swinging the White House to the Democrats.

Trump's language about immigrants, and his hardline policies, loomed over the El Paso shooting.

He has described groups of immigrants as "infestations," declared in his campaign kickoff that many of those coming from Mexico were "rapists," recently told four congresswomen of color to "go back" to the countries where they came from, deemed a caravan of Hispanic migrants as invaders and wondered why the United States accepted so many immigrants from "s---hole countries" like Haiti, El Salvador and African nations. Critics also point to his campaign proposal to ban all Muslims from entering the United States, his suggestion that President Barack Obama was not born in the United States and his administration's efforts to curtail asylum and separate immigrant children from their parents at the border.

The president has also repeatedly been denounced for being slow to criticize acts of violence carried out by white nationalists, or deem them acts of domestic terrorism, most notably when he declared there were good people on "both sides" of the 2017 deadly clash in Charlottesville. The number of hate groups has surged to record highs under Trump's presidency, according to the Southern Poverty Law Center.

"He is encouraging this. He doesn't just tolerate it; he encourages it. Folks are responding to this. It doesn't just offend us, it encourages the kind of violence that we're seeing, including in my home town of El Paso yesterday," former Rep. Beto O'Rourke, a 2020 Democratic contender, said on CNN's "State of the Union." ''He is an open, avowed racist and is encouraging more racism in this country. And this is incredibly dangerous for the United States of America right now."

"We must come together to reject this dangerous and growing culture of bigotry espoused by Trump and his allies," tweeted Sen. Bernie Sanders of Vermont. "Instead of wasting money putting children in cages, we must seriously address the scourge of violent bigotry and domestic terrorism."

"It is very clear that this kind of hate is being legitimized from on high," Buttigieg, the mayor of South Bend, Indiana, said in an interview on CNN.

Acting White House chief of staff Mick Mulvaney defended the president's response, saying Trump was "a combination of saddened by this and he's angry about it." Mulvaney told ABC's "This Week" that Trump's first call was "to the attorney general to find out what we could do to prevent this type of thing from happening."

"These are sick people," he said. "And we need to figure out what we can do to make sure this doesn't happen again."

Mulvaney focused on the challenges of mental illness and largely dodged the notion of supporting widespread gun control measures, though he pointed out the administration banned bump stocks, which help turn semi-automatic weapons into more lethal automatic ones. Trump, who has enjoyed deep support from the National Rifle Association gun lobbying group, has stayed away from most gun control measures, including after being personally lobbied by survivors of last year's school shooting in Parkland, Florida.

White House officials said there were no immediate plans for Trump to address the nation after the shooting. Other presidents have used the aftermath of a national tragedy to reassure citizens, including when George W. Bush visited a mosque less than a week after the Sept. 11, 2001, terror attacks to stand up for Muslims in the United States and when Obama spoke emotionally after mass shootings in a Sandy Hook school and Charleston church.

Trump has struggled to convey such empathy and support, and drew widespread criticism when he tossed paper towels like basketballs to hurricane victims in Puerto Rico. He has also, at times, seemed to welcome violence toward immigrants. At a May rally in Panama City Beach, Florida, Trump bemoaned legal protections for migrants and asked rhetorically, "How do you stop these people?"

"Shoot them!" cried one audience member.

Trump chuckled and said "Only in the Panhandle you can get away with that statement."