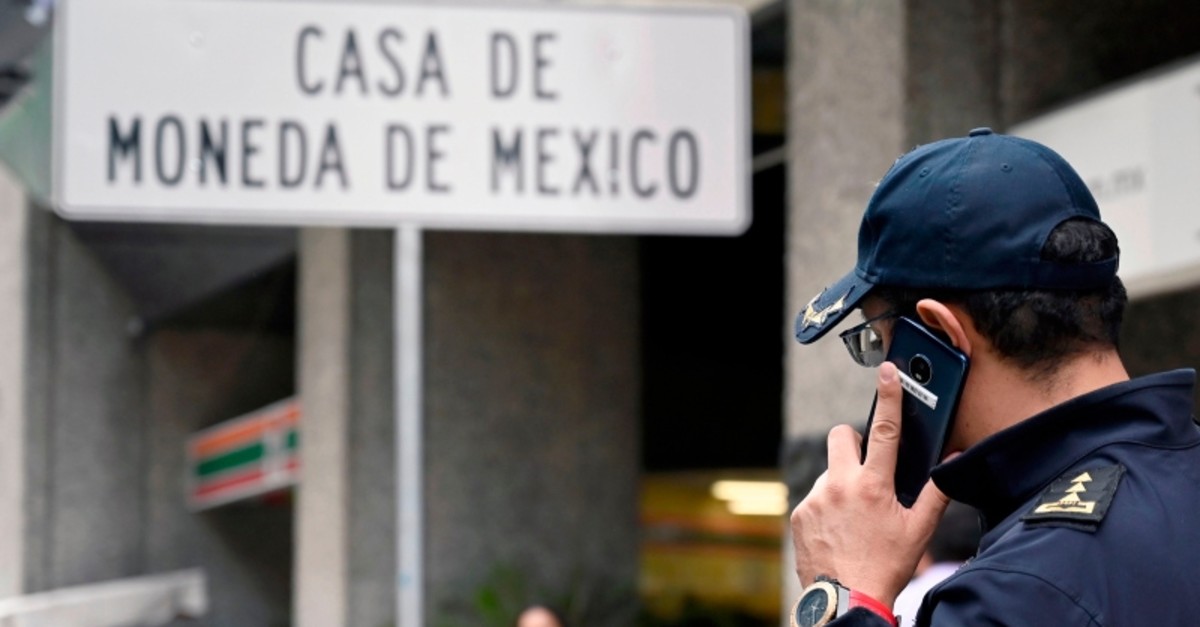 A policeman speaks on his mobile phone outside Mexico's Casa de Moneda, in Mexico City on August 6, 2019, which was robbed earlier today and the assailants took a swag of approximately two and a half million dollars in gold coins. (AFP Photo)
by Compiled from Wire Services Aug 07, 2019 9:56 pm

Two clean-cut, young-looking men in neat office attire and another man in a black baseball cap and heavy jacket made off with 1,567 gold coins in the daytime caper on Tuesday, according to security camera images.

Martínez ​said the gunmen got away with gold coins, commemorative watches and other valuables. He didn't put a value on the loss, but local media said the stolen items were worth up to 50 million pesos ($2.5 million).

"The line of investigation ... is that there were deficiencies in the security protocol," Mexico City Security Minister Jesus Orta told local television program Foro TV in an interview aired on Wednesday.

The heist on Tuesday was the latest high-profile crime to hit Mexico City, where delinquency has increased during record lawlessness plaguing the country.

Security camera footage taken from the office tower where the government runs a "Casa de Moneda" branch revealed glimpses of the three suspects.

One wore a gray sweater with the collar of dress shirt peeking out, while another in a white sweater carried a black backpack and stared directly into the camera.

Orta has said the armed group seized the gun from the single security guard on duty and went straight to the vault.

One of the robbers filled a backpack with gold coins from the open vault, according to earlier police reports.

"It is striking that they went directly to the vault, and that they easily removed, or stole, coins... and commemorative watches," Orta said in a Radio Formula interview on Tuesday.

The coin was first minted in 1921 to commemorate the 100th anniversary of Mexico's independence from Spain, according to the central bank. Production was suspended in 1931, but the coin was re-minted beginning in 1943 due to demand for gold coins.

One side bears Mexico's coat of arms, with an eagle perched atop a cactus, and the other features the capital's iconic Angel of Independence monument backed by two volcanoes.

The same Casa de Moneda branch was also broken into last year while the building was being renovated, according to Mexican media.

Mexico is suffering from record murder levels that have made the capital, long regarded as a relatively safe haven, increasingly prone to violent crime.

Last month two Israeli men were gunned down inside a high-end Mexico City shopping mall, and in a separate incident, Mexican boxing legend Julio Cesar Chavez said he was mugged at gunpoint.