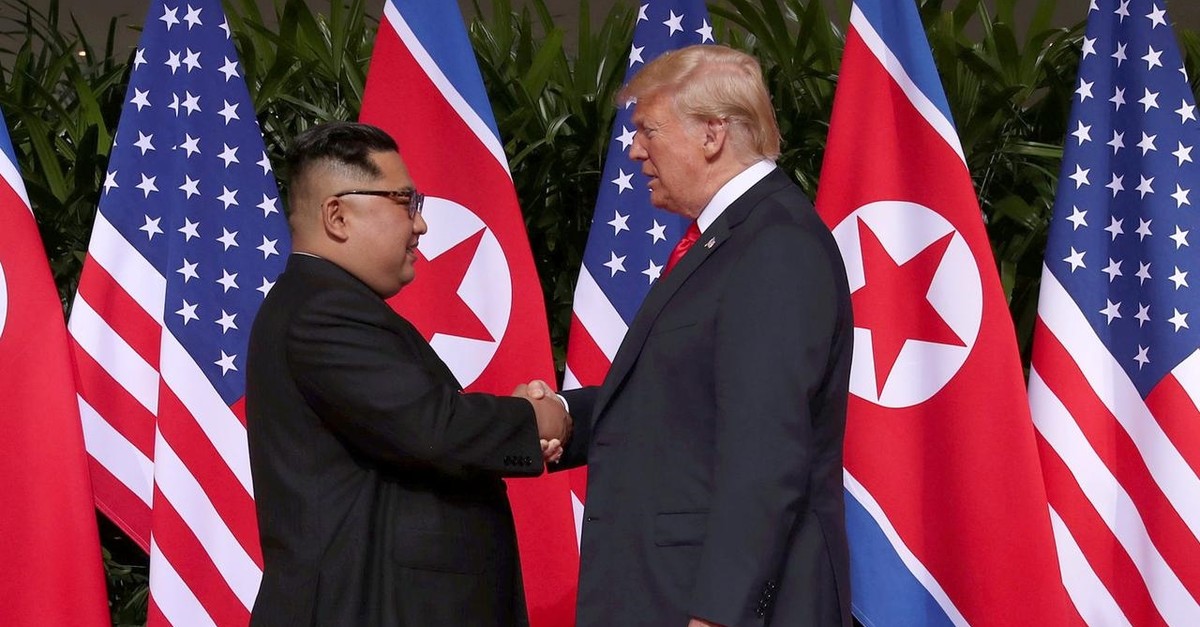 Trump tweeted that in a letter to him, Kim issued "a small apology" for a recent spate of missile tests, the latest of which came at daybreak Saturday Korean time, and said they were to protest these joint military drills.

Trump said he looks "forward to seeing Kim Jong Un in the not too distant future!"

"In a letter to me sent by Kim Jong Un, he stated, very nicely, that he would like to meet and start negotiations as soon as the joint U.S./South Korea joint exercise are over," Trump wrote.

The exercises began Monday and are due to end Aug. 20.

North Korea, which has furiously protested such exercises in the past, has said its recent short-range missile tests are designed to protest the war games.

On Saturday, Trump again seemed to side with Kim by criticizing the exercises, which are a cornerstone of U.S.-South Korean military cooperation.

"It was a long letter, much of it complaining about the ridiculous and expensive exercises. It was also a small apology for testing the short-range missiles, and that this testing would stop when the exercises end," Trump said.

Trump has appeared determined to secure a denuclearization agreement with North Korea ahead of next year's US presidential elections, despite faltering talks since he first met Kim in a historic ice-breaking summit in Singapore in June 2018.

Even after their abortive second summit in February -- and even as Pyongyang has continued to test short-range missiles -- Trump has been reluctant to criticize the North Korean leader.

The U.S. president has repeatedly talked up his close personal relationship with Kim, as his administration seeks to resume the stalled denuclearization talks.

On Friday he described the message he got from Kim as "a very beautiful letter."

In June he offered an olive branch by meeting Kim in the Panmunjon truce village in the Korean Demilitarized Zone, becoming the first sitting US president ever to step inside the North.

On Friday, Trump said the missile launches were not important.

"I'll say it again. There have been no nuclear tests. The missile tests have all been short-range. No ballistic missile tests, no long-range missiles," Trump said.

Defense officials in Seoul said what appeared to be two short-range ballistic missiles were fired at daybreak Saturday from near the northeastern city of Hamhung, flying 400 kilometers (250 miles) before splashing down in the sea between the Korean peninsula and Japan.

Officials in both South Korea and Japan -- whose countries are within the missiles' range -- have expressed concerns.

And in contrast to Trump's dismissal of the launches, others in the U.S. administration have voiced opposition to them.

After Pyongyang's fourth launch early this week, Secretary of State Mike Pompeo said Washington was ready to resume talks, but that the target of the "full, final denuclearization of North Korea" had not changed.

A senior State Department official who refused to be named told journalists last week that the missile tests were an impediment to peace.

"The missile launches, any kind of provocations, are not helpful to advancing the cause of diplomacy," the official said.

Washington and Seoul pledged in March to scale down their joint drills in an effort to foster denuclearization talks with Pyongyang.

They even declined to provide an official announcement of the maneuvers' start, the U.S. military newspaper Stars and Stripes reported. It said US Forces Korea, the main command, would not discuss training plans "as a matter of standard operating procedures and in order to allow diplomacy to work."

While past exercises involved extensive combat field training -- with thousands of American troops coming in from several countries to take part -- the current games are decidedly low-key, with the emphasis on computer-simulated scenarios.