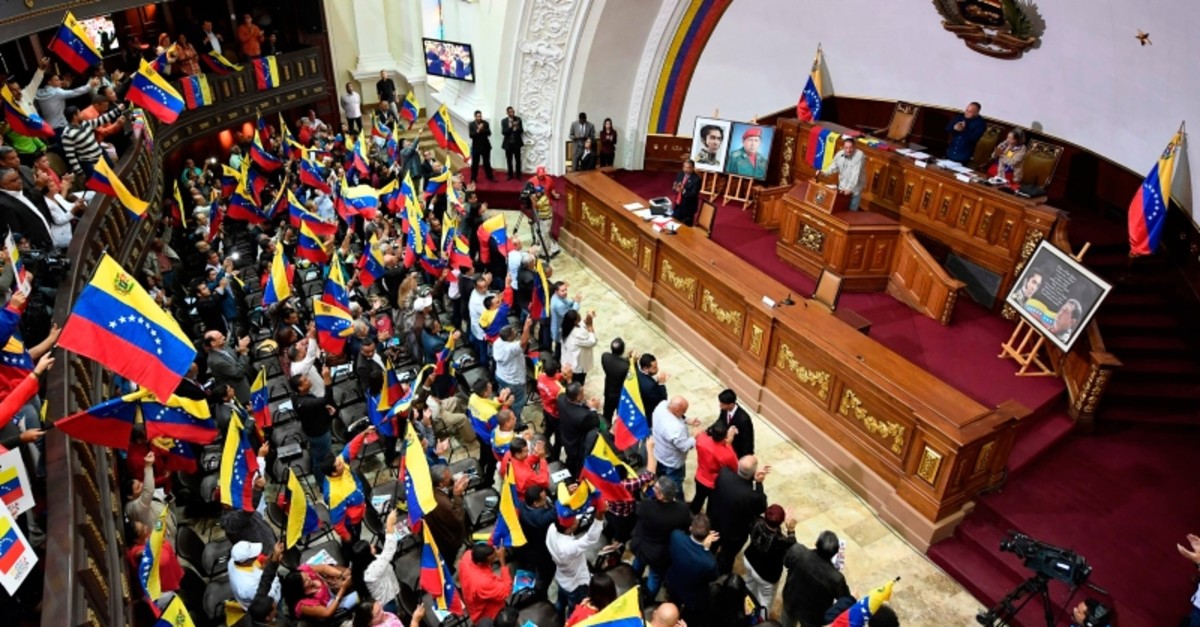 Members of the Venezuelan National Constituent Assembly (ANC) wave flags as its president Diosdado Cabello speaks, during a session at the ANC headquarters on August 12, 2019, in Caracas. (AFP Photo)
by Aug 15, 2019 9:59 pm

The Venezuelan government is willing to relaunch talks with the opposition, which were interrupted after the United States imposed new sanctions on the country, Foreign Minister Jorge Arreaza said on Thursday.

"President Nicolas Maduro made [the talks] take a break, we have not withdrawn from the process," the national news agency AVN quoted Arreaza as saying.

"Of course there will be contacts and we will surely be able to re-establish this dialogue," the minister added. He also stressed the need for "a mechanism that would guarantee peace, coexistence between all Venezuelans."

Opposition leader Juan Guaido said on Wednesday that representatives of Norway, which has acted as an intermediary, had arrived in Caracas.

"Representatives of the kingdom of Norway are here," Guaido said. "We shall participate in any process that brings nearer a real solution to the conflict," he said.

Maduro pulled back a government delegation from planned talks in Barbados following the sweeping US sanctions that kicked in last week.

The government attributed the withdrawal to US "aggression" against Venezuela in freezing its US assets and to Guaido supporting such measures.

Maduro's government and the opposition have been holding talks on the Caribbean island of Barbados since July, and previously held talks in Oslo in May.

Maduro, who has presided over a massive economic crisis, won a second term in a disputed election held last year. Guaido declared himself interim president in January and won the support of dozens of countries for his campaign to oust Maduro.

In another development, Diosdado Cabello, president of the pro-government Constituent Assembly, said that elections of the opposition-controlled National Assembly could be held in early January.

"Don't go on holidays in December, because it could be the first or the second of January," daily El Nacional on Wednesday quoted Cabello as saying.

Regular elections are not due until late next year. The opposition regards the government's plans for early elections as a ploy to dissolve the National Assembly, or congress, in order to silence criticism.

In another development, Colombian Foreign Minister Carlos Holmes Trujillo rejected accusations by Maduro that Colombia's former president Alvaro Uribe - known as the mentor of President Ivan Duque - had launched a plan to kill him.

"It is a plan to bring in 32 mercenaries to try to assassinate me and leaders of the revolution," Maduro said on Wednesday. Seven Colombian paramilitaries had previously been captured on the countries' common border, broadcaster Telesur reported.

Maduro had already made similar accusations earlier against Colombia, a staunch US ally.