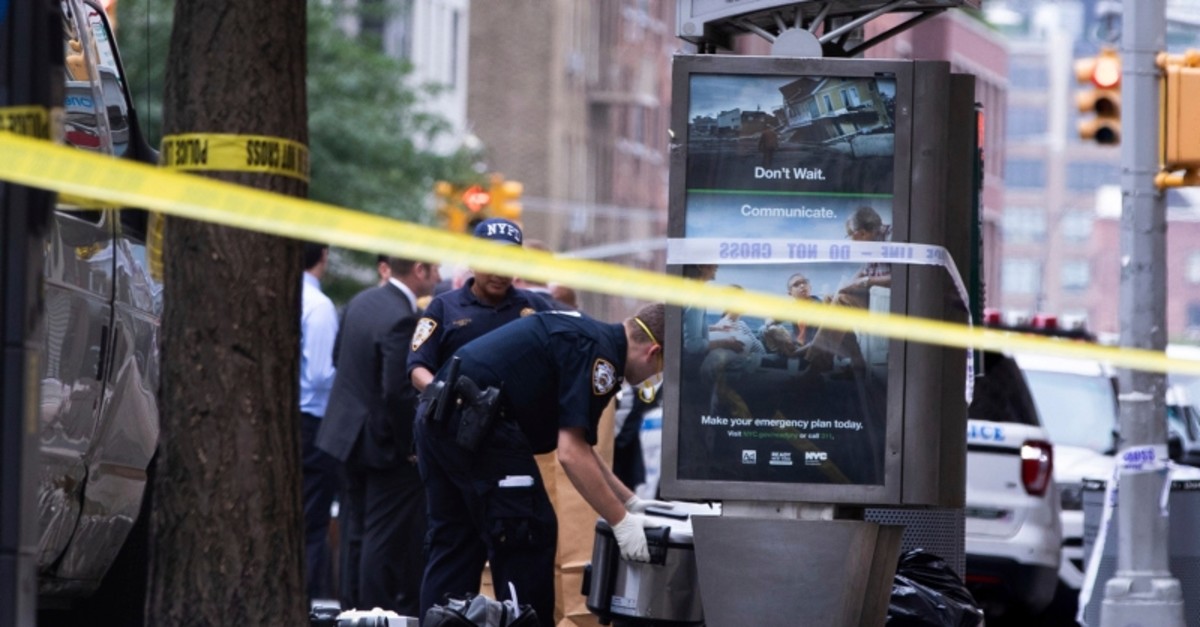 An investigator picks up a suspicious package that was thought to be an explosive device in Manhattan's Chelsea neighborhood Friday, Aug. 16, 2019 (AP Photo)
by Associated Press Aug 16, 2019 6:01 pm

Three abandoned devices that looked like pressure cookers prompted an evacuation of a major New York City subway station and closed off an intersection in another part of town Friday morning before police determined the objects were not explosives.

Police were looking to talk to a man seen on surveillance video taking two of the rice cookers out of a shopping cart and placing them in the subway station in lower Manhattan. But police emphasized that so far, it wasn't clear whether he was trying to frighten people or merely throwing the objects away.

"I would stop very short of calling him a suspect," said John Miller, top New York Police Department counterterror official. "But we need to know the facts behind this."

"It is possible that somebody put out a bunch of items in the trash today and this guy picked them up and then discarded them, or it's possible that this was an intentional act," he said.

Earlier, Gov. Andrew Cuomo had said authorities suspected the items were placed in the subway "to suggest that they were electronic devices and possible bombs." 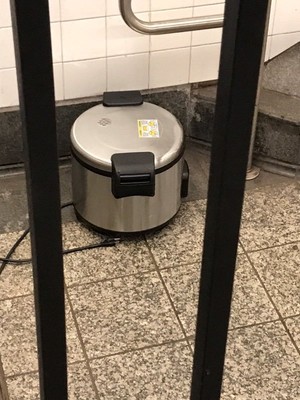 This photo provided by NYPD shows a suspicious object which looks like a pressure cooker or electric crockpot on the floor of the New York City Subway platform on Friday, Aug. 16, 2019 in New York (AP Photo)

Pressure cookers have been used to make bombs in the past.

Police swarmed the initial find around 7 a.m. on the mezzanine and platform of the Fulton Street station, a few blocks from the World Trade Center and New York Stock Exchange. Dozens of suspicious packages are reported daily in New York City, but the proximity to the site of the Sept. 11 attacks served to heighten anxiety before police gave the all-clear.

About two hours later, a third rice cooker — the same make, year and model — was also found about 2 miles away (3 kilometers) on a sidewalk in the Chelsea neighborhood, prompting another police investigation.

"This is a frightening world we live in, and all of these situations have to be taken seriously because God forbid one day ... it's a real device," said Cuomo, a Democrat. "We learned the hard way after 9/11, and we are prepared."

Michael Oji, a New Jersey resident who works in lower Manhattan, said he's lived in the metro area for more than 20 years and saw the additional security that came to the area after the Sept. 11 attacks.

"Going to work in the morning, thinking that everything's OK, and you run into something like this, it's scary," he said just outside an entrance to the station that had been closed off by armed officers.

Multiple subway lines were partially suspended during the police investigation at Fulton Street, and delays continued throughout the morning.

Pressure cookers packed with explosives killed three people and injured hundreds when a pair of terrorists detonated them during the Boston Marathon in 2013.

In September 2016, a pressure-cooker bomb went off in Manhattan's Chelsea neighborhood, injuring 30 people.

In 2017, would-be suicide attacker Akayed Ullah set off a homemade pipe bomb in an underground passageway at the Times Square subway station during rush hour, seriously injuring himself.