US witnesses repeat of violence between far-right, anti-fascist groups 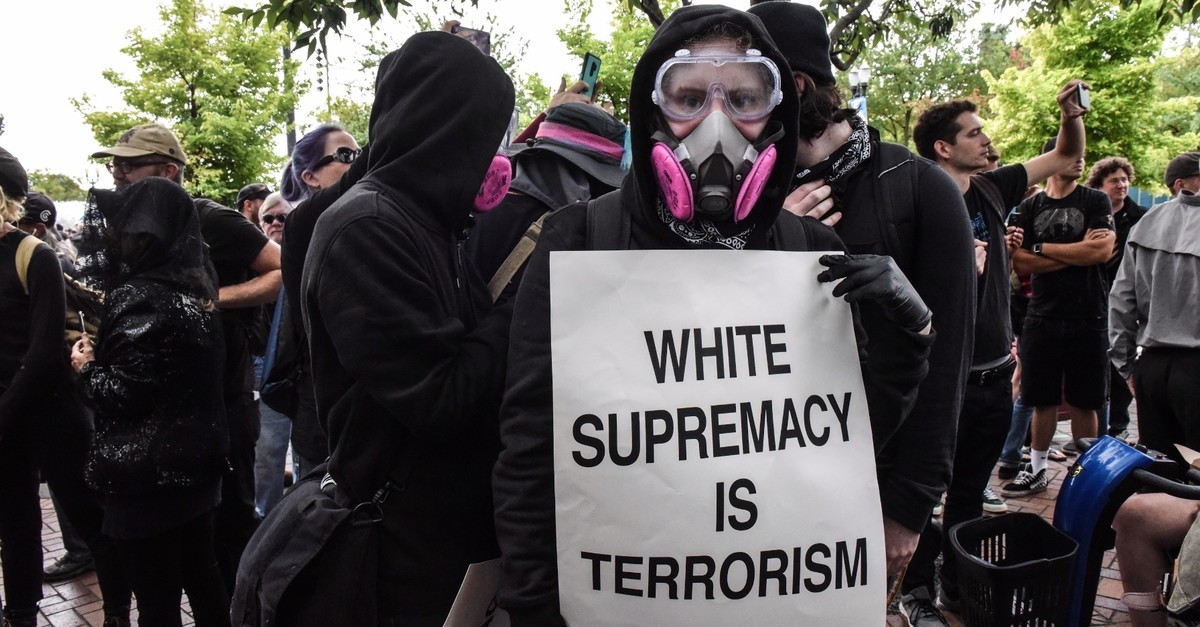 Members of the anti-fascist ANTIFA movement hold up signs against white supremacy during an alt-right rally, Portland, Oregon, Aug. 17, 2019.
by Daily Sabah with Agencies Aug 19, 2019 12:33 am

A far-right rally and counter protesters faced off in the U.S. city of Portland, recalling the 2017 Charlottesville rally that became a bloody symbol of the nation's smoldering racial and political divisions

Days after the second anniversary of a deadly white nationalist rally in Charlottesville, Virginia, a far-right rally and leftist counter-demonstration in the city of Portland, Oregon, wrapped up over the weekend, following fears that violent clashes would break out.

During Saturday's rally, an informal coalition of white nationalists, white supremacists and extreme-right militias honed its focus on Oregon's largest city as a symbol for everything it feels is wrong with the U.S. At the top of that list are the masked and black-clad anti-fascists who turn out to violently oppose right-wing demonstrators as soon as they set foot in town.

The far-right gathering was organized in part by a group that calls itself the Proud Boys and says its members are young, "Western chauvinist" men. The Southern Poverty Law Center, a major civil rights organization, has classified the Proud Boys as a hate group. Others included members of the American Guard, the Three Percenters, the Oathkeepers and the Daily Stormers. The American Guard is a white nationalist group, according to the Southern Poverty Law Center, while the Three Percenters and the Oathkeepers are extremist anti-government militias. The Daily Stormers are neo-Nazis, according to the center. The Proud Boys leaders say the goal of the Portland rally was to have the so-called ANTIFA movement declared a domestic terror organization, news reports said. ANTIFA stands for anti-fascist and refers to a loose international coalition of activists and protesters who oppose far-right ideologies.

In a Saturday morning tweet, Trump wrote: "Hopefully the Mayor will be able to properly do his job." He also wrote that "major consideration is being given to naming ANTIFA an 'ORGANIZATION of TERROR'," while saying nothing about the far-right demonstrators. But it wasn't immediately clear what he meant by that, as there's no mechanism for the U.S. government to declare a domestic organization a terror group. The State Department maintains a list of designated foreign terrorist organizations, such as al-Qaida, but there's no comparable designation or list for American groups. In his tweet, Trump refrained from the type of comment he made two years ago regarding deadly violence in Charlottesville, Virginia, when he said there were "very fine people on both sides" about the white-supremacist rally there. Trump had initially tweeted on July 27 that he was considering classifying the ANTIFA group as terrorists. The tweet came after U.S. Senators Ted Cruz (R-Texas), and Bill Cassidy (R-Louisiana), introduced a resolution calling for the terrorist designation, citing a June 29 Portland assault on Andy Ngo, a conservative journalist.

Experts who track right-wing militias and hate groups warned that the mix of people in Portland also came together for a Unite the Right rally in 2017 in Charlottesville, Virginia, which ended when a participant rammed his car into a crowd of counter protesters, killing one person and injuring 19. The Aug. 12, 2017, rally drew a mix of violent far-right extremists. Brawls broke out with anti-racism protesters, and authorities eventually forced the crowds to disperse. The car attack came later as peaceful counter protesters were marching through the downtown area.