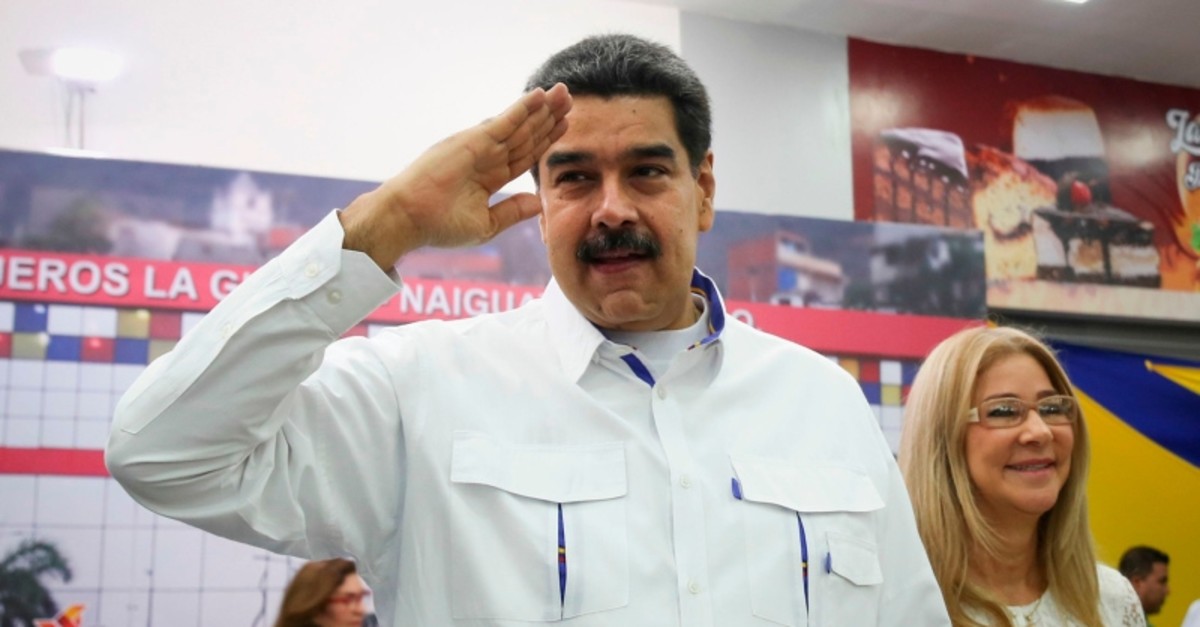 Handout photo released by the Venezuelan Presideny of Venezuela's President Nicolas Maduro saluting next to his wife Cilia Flores during the inauguration of a passenger terminal in La Guaira, Venezuela, on Aug. 20, 2019. (AFP Photo)
by Compiled from Wire Services
Aug 21, 2019 10:12 am
Venezuelan President Nicolas Maduro and U.S. President Donald Trump both confirmed Tuesday that secret talks have been taking place between the two administrations to resolve the longstanding conflict between the two countries.

"There have been talks for months under my authorization between the Trump administration and the Bolivarian government to find a solution to the conflict between us and the North American empire," he told an event in La Guaria city.

He added that they would maintain contact with the U.S.

On Monday, however, Socialist Party Vice President Diosdado Cabello, the No. 2 man in the Venezuelan government, denied allegations that he was in secret talks with members of the U.S. administration.

Maduro also stressed that he will always defend Venezuela's solidarity and added that his country was ready for negotiations to resolve the conflict.

"But if you attack us, we will respond," he added.

As he took questions from reporters Tuesday, Trump confirmed his administration is talking to "various representatives of Venezuela" but refused to say whether the White House is specifically talking to Cabello.

Guaido has not directly addressed the high-level U.S.-Venezuela exchange, but said Tuesday that he's been working since earlier this year toward a pacific transition.

Venezuela has been rocked by political unrest since Jan. 10, when Maduro was sworn in for a second term. Tensions escalated on Jan. 23 when Guaido declared himself interim president.

Russia, China and Iran have thrown their weight behind Maduro, as has Turkey.

Spain, Britain, France, Sweden, Germany, Japan and Denmark joined the U.S. and Canada in recognizing Guaido as the country's interim leader. Despite his widespread international backing, Guaido has been unable to shake Maduro's leadership of the country and control of the military.