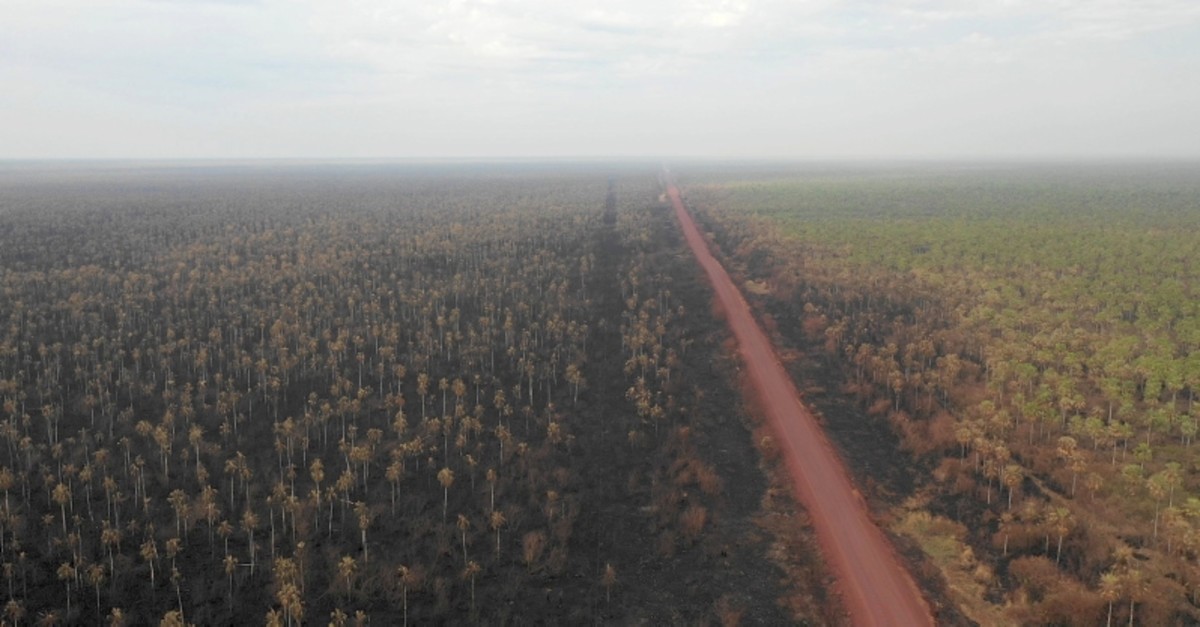 Aerial view of the damage caused by wildfires in Otuquis National Park, in the Pantanal ecoregion of southeastern Bolivia, on August 27, 2019. (AFP Photo)
by Compiled from Wire Services Aug 28, 2019 11:42 am

While global attention has been focused on fires burning across the Brazilian Amazon, neighboring Bolivia and Africa's Congo Basin, often referred to as the "second green lung" of the planet, also battle with huge fires.

At least 38,793 fires were burning across Bolivia as of the weekend, and a total of 3,700 square miles (950,000 hectares) had been burned so far this year, which have charred an area nearly as extensive as the nation of Lebanon, according to Cliver Rocha, director of the national Forests and Lands Authority.

Bolivia is one of nine South American countries to share the Amazon rainforest along with Brazil, Peru, Colombia, Venezuela, Ecuador, Bolivia, Guyana and Suriname. While some of the fires were burning in Bolivia's share of the Amazon, the largest blazes were in the Chiquitanía region of southeastern Bolivia, a zone of dry forest, farmland and open prairies that has seen an expansion of farming and ranching in recent years.

The College of Biologists in the capital, La Paz, has estimated that the fires have destroyed $1.1 billion worth of timber.

Yanine Rubí Montero said the fires burned away the lemon trees her family depended on near the rural town of Robore. They were left without water as well because the blaze destroyed a plastic pipe that ran to a well. One neighbor fled with just the clothes on her back, Montero said.

"The smoke is making us sick and the lack of water is really affecting us," she said.

President Evo Morales, who has been under criticism for an allegedly slow response to the fires, was in the region on Tuesday overseeing firefighting efforts involving more than 3,500 people, including soldiers, police and volunteers.

The government last week contracted the world's largest firefighting tanker plane, a Boeing 747 "Supertanker," from the United States, and officials say it has helped control the expansion of the fires, but hot, dry and windy conditions have kept the blazes burning. Peru on Tuesday contributed to the effort by sending two helicopter tankers.

The Bolivian Friends of Nature Foundation has complained that the government ignored fire precautions needed at a time when the area — unlike the Amazon further north — is suffering drought conditions.

Morales in July issued a decree allowing controlled burns and clearing of lands. While people are supposed to obtain prior permission, authorities say most of the fires have been started illegally. Morales also granted an amnesty for people caught burning fields illegally last year.

Despite a campaign by environmentalists to have the measures overturned, Environment Minister Carlos Ortuño said the government didn't believe that was necessary.

"The rules are not a direct cause (of the fires). These practices come from many years back and what we want is that there are controlled burns, but lamentably 90% are illegal."

Opponents have seized upon the government response as an issue in Morales' campaign for re-election in October. The opposition Committee for the Defense of Democracy announced it would seek charges against Morales and other authorities, accusing them of being slow to attack the problem.

But Franklin Pareja, a professor of political science at the Higher University of San Andres in the capital of La Paz, said that while many are angered, "the population that is protesting is a universe that has now decided on its vote." He said it shouldn't be catastrophic for Morales, who leads in the polls, unless the problem drags on.

Meanwhile, Morales gave a half-hearted welcome Tuesday to a G7 pledge of $20 million to fight the Amazon wildfires, describing it as "tiny."

An underwhelmed Morales said the aid from the most industrialized countries was part of the world's "obligation" to preserve the Amazon rainforest.

"I welcome that small, small, tiny contribution of $20 million from the G7 -- that is not help, it is part of a shared co-responsibility, as all peoples have the obligation to preserve the ecosystem," Morales told Bolivia's Radio Panamericana.

The richest nations "should contribute a lot, and not only when there are fires," the president said, adding that he hoped the aid would arrive as quickly as possible.

Morales told the radio he had agreed with Paraguay's President Mario Abdo to allow fire-fighting aircraft to cross one another's border wherever necessary to fight the fires.

Morales announced on Tuesday that 7,000 out of the 8,000 blazes had been put out, adding over 2 million liters of water have been dumped on the wildfires from firefighting planes in recent days.

G7 countries meeting in France made the $20 million aid offer to help Brazil and Bolivia fight the blazes. Brazil rejected the offer amid a spat between President Jair Bolsonaro and his French counterpart Emmanuel Macron, who has blamed his policies for damaging the Amazon.

Like Bolsonaro, Morales has been criticized for his land-clearing policies. On Tuesday, he said he had decreed a pause in land sales and purchases to prevent people taking advantage of the fires clearing large areas of land for crops and livestock.

The fires in Brazil have created a major crisis for the far-right government of President Jair Bolsonaro, who is losing popularity at home and finding himself isolated on the global stage over his response to blazes that threaten what many view as a key bulwark against global climate change.

Peru and Colombia called on Tuesday on fellow Amazonian countries to attend a presidential meeting next month on the forest fires raging in Brazil and Bolivia and to forge a pact to protect the world's largest tropical forest.

The meeting is scheduled to take place in the Amazonian region of Leticia in Colombia on Sept. 6, the two countries said in a statement after Peruvian President Martin Vizcarra and Colombian President Ivan Duque met.

"We have to raise our voice to a presidential level and make a pact where we all coordinate our actions to protect our Amazon," Duque told a news conference in the Amazonian city of Pucallpa in Peru.

Vizcarra said the meeting would seek to commit countries to a common plan for protecting the rainforest in the Amazon basin.

"It shouldn't just be a reactive policy due to the emergency that neighboring countries are facing with these fires. Rather it should have a long-term view on how to avoid deforestation," Vizcarra said alongside Duque.

Duque called the fires in Brazil "worrisome" but added that people around the world need to become more aware of how they contribute to climate change.

Morales called for an emergency meeting of Amazonian countries on Friday, but said "some countries" had shown a lack of interest for ideological reasons.

The forests cover an area of 3.3 million square kilometers, including about a third in the Democratic Republic of Congo.

Greenpeace on Tuesday called on governments to take more action to combat central African forest fires that have come into the spotlight since the global outcry over Amazon.

"Greenpeace Africa calls on the Congo Basin governments to take immediate measures to prevent fires from hitting the rainforest," the environmental group said in a statement.

"For the long-term, governments must end all industrial activity within the world's second-largest rainforest."

Since August 21, more than 6,902 fires in Angola and 3,395 fires in neighboring Democratic Republic of Congo have been documented, predominantly in the savanna area, the group said without giving any comparisons from past years.

Like the Amazon, Greenpeace said, the Congo Basin rainforest still faces a risk of being hit again by uncontrolled fires.

Experts say fires in the Amazon are mainly because of climate change and drought whereas in central Africa fires are often seasonal and triggered by traditional slash-and-burn farming methods.

Just like the Amazon, the forests of the Congo Basin absorb tons of carbon dioxide (CO2) in trees and marshes -- seen by experts as a key way to combat climate change.

Most of the fires shown on NASA satellite maps of central Africa are outside sensitive rainforest areas, analysts say, making drawing comparisons to the current Amazon blazes more complicated.

"The question now is to what extent we can compare," said Philippe Verbelen, a Greenpeace forest campaigner working on the Congo Basin.

"Fire is quite a regular thing in Africa. It's part of a cycle, people in the dry season set fire to bush rather than to dense, moist rainforest."

Guillaume Lescuyer, a central African expert at the French agricultural research and development center CIRAD, also said the fires seen in NASA images were mostly burning outside the rain forest.

The fires were usual at the end of the dry season, the Angolan ministry of environment said.

"It happens at this time of the year, in many parts of our country, and fires are caused by farmers with the land in its preparation phase, because of the proximity of the rainy season," it said.

Though less publicized than the Amazon, the Congo Basin forests still face dangers.

"The forest burns in Africa but not for the same causes," said Tosi Mpanu Mpanu, an ambassador and climate negotiator for the DR Congo.

"In the Amazon, the forest burns mainly because of drought and climate change, but in central Africa, it is mainly due to agricultural techniques."

Many farmers use slash-and-burn farming to clear forest. In DR Congo, only nine percent of the population has access to electricity and many people use wood for cooking and energy.

DR Congo President Felix Tshisekedi has warned the rainforests are threatened if the country does not improve its hydro-electric capacity.

Deforestation is also a risk in Gabon and parts of the DR Congo, as well as damage from mining and oil projects.

Some countries are now implementing stricter environmental policies. Gabon, for example, has declared 13 national parks that make up 11 percent of its national territory.

DR Congo has declared a moratorium on new industrial logging licenses but that has not stopped artisanal cutting, which industrial loggers can exploit.