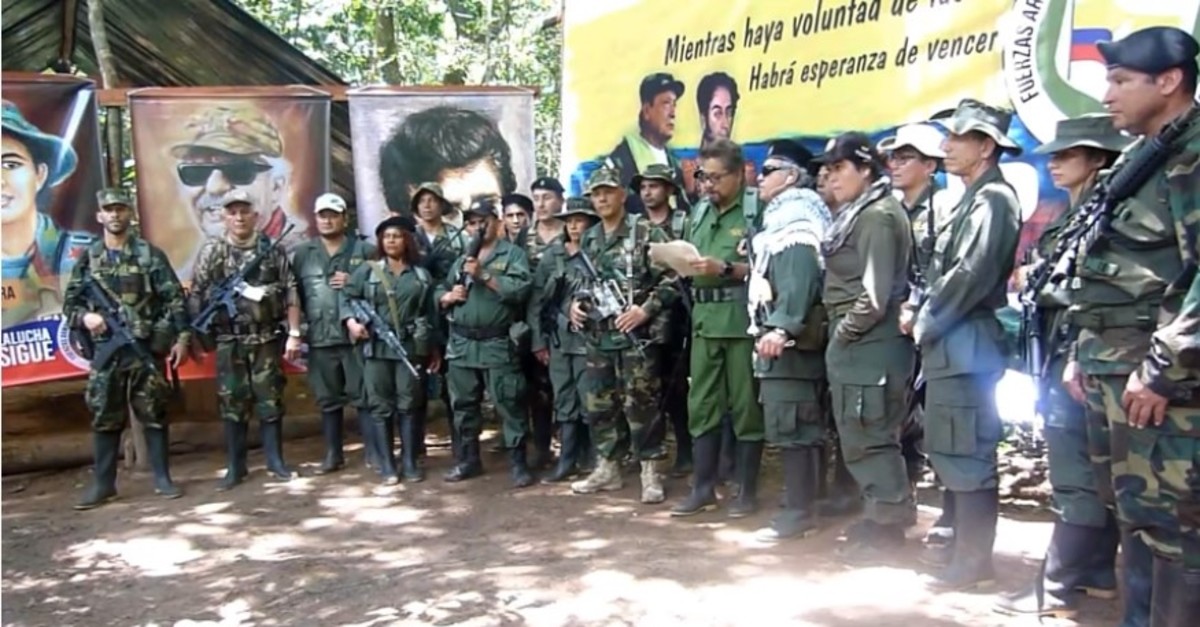 A group of former peace negotiators for the Revolutionary Armed Forces of Colombia announced they are taking up arms again following what they considered the failure of conservative President Ivan Duque to guarantee their political rights after the signing of a landmark peace deal.

In a 32-minute YouTube video published before dawn Thursday, former chief rebel negotiator Luciano Marin Arango appeared alongside a group of some 20 heavily armed guerrillas condemning Duque and his supporters for standing by idly as hundreds of leftist activists and more than 150 former rebels have been killed since the 2016 peace deal, which sought to end a half-century of fighting in the South American country.

"When we signed the accord in Havana we did so with the conviction that it was possible to change the life of the most humble and dispossessed," Marin, better known by his alias Ivan Marquez, said in the more than 30-minute video. "But the state hasn't fulfilled its most important obligations, which is to guarantee the life of its citizens and especially avoid assassinations for political reasons."

"We announce to the world that the second Marquetalia [birthplace of the FARC in 1964] has begun under the protection of universal law that applies to all peoples of the world to take up arms against oppression," Marquez said.

"We recognize that we incurred several errors," he added, referring to the group laying down its weapons in the aftermath of a recent agreement with the Colombian government.

Marquez added that since the peace deal, more than 500 leaders and 150 guerrillas of the movement have been killed in the two years that followed.

In the video, Marquez, speaking from what he said were Colombia's western jungles in the Amazon rain forest, stood alongside several former FARC leaders, including ideologue Seuxis Pausias Hernandez, alias Jesús Santrich, who abandoned the peace process after his arrest was sought by the U.S. on drug charges. Marquez himself went missing last year after his nephew was arrested for drug-trafficking.

The commander Hernan Dario Velasquez, who goes by the alias "El Paisa," also appears in the video.

The group's objective is the installation of a government that will support peace, Marquez said. It will fight corruption and fracking and demand payments from those participating in illegal economies and from multinational companies, he said.

The dissident group will seek to coordinate with fellow leftist rebels the National Liberation Army (ELN), Marquez said, and will not use kidnapping and ransom as a source of financing.

"All of this, this trick, this betrayal, this perfidy, the unilateral modification of the text of the accord, the unfulfilled commitments on the part of the state, the judicial set-ups and insecurity, have obliged us to return to the mountains," said Marquez.

Rodrigo Londono, who had been the FARC's top military commander and now heads its Revolutionary Alternative Common Force political party known by the same acronym, distanced himself from his former comrades, with whom relations have been strained in the past year. In an interview with Blu Radio he apologized to his fellow Colombians and the international community, saying that the vast majority of rebels remain committed to the peace process despite the rising security risks.

"I have mixed feelings," said Londono, who is better known by his alias Timochenko. "It's an unfortunate development, but at the same time it leaves things clearer and ends the ambiguity because we had been facing a complex situation for some time."

"The great majority remain committed to the deal, despite all the difficulties and dangers," Londono also said on Twitter. "We are with peace."

Some 13,000 FARC members, including 7,000 combatants, handed over their weapons to observers from the United Nations as part of the deal negotiated with the support of the U.S., Cuba and Norway, many joining reintegration efforts or returning home to their families. But smaller rebel groups and drug trafficking gangs have filled the void left by the withdrawing FARC rebels, leaving many Colombians frustrated with the slow pace of implementing the accord.

"The start of a new guerrilla group by Ivan Márquez is a politically significant event, but at this point does not alter the country's security profile or security risks. Most likely members of the group aren't even in Colombia to begin with," said Sergio Guzman, founder of Colombia Risk Analysis. Many active rebels are believed to base themselves in neighboring Venezuela.

President Ivan Duque was elected on a platform to change parts of the deal, but has failed to get congressional or judicial support to do so. He has repeatedly said former guerrillas with a true desire to disarm will be supported. Duque, who sees the peace deal as being too lenient on the ex-rebels, has been accused of trying to undermine it with moves such as seeking modifications to the functioning of the post-conflict tribunal JEP.

There was no immediate reaction from the Duque government.

Centrist Senator Roy Barreras, who helped to negotiate the Havana agreement, dismissed Marquez and his allies as having "no operative capacity" and representing no threat.

More than 260,000 people have been killed and nearly eight million people have been displaced during Colombia's conflict between the government, rebel groups, crime gangs and right-wing paramilitaries since 1958.