Dorian inches toward US coast after devastating Bahamas 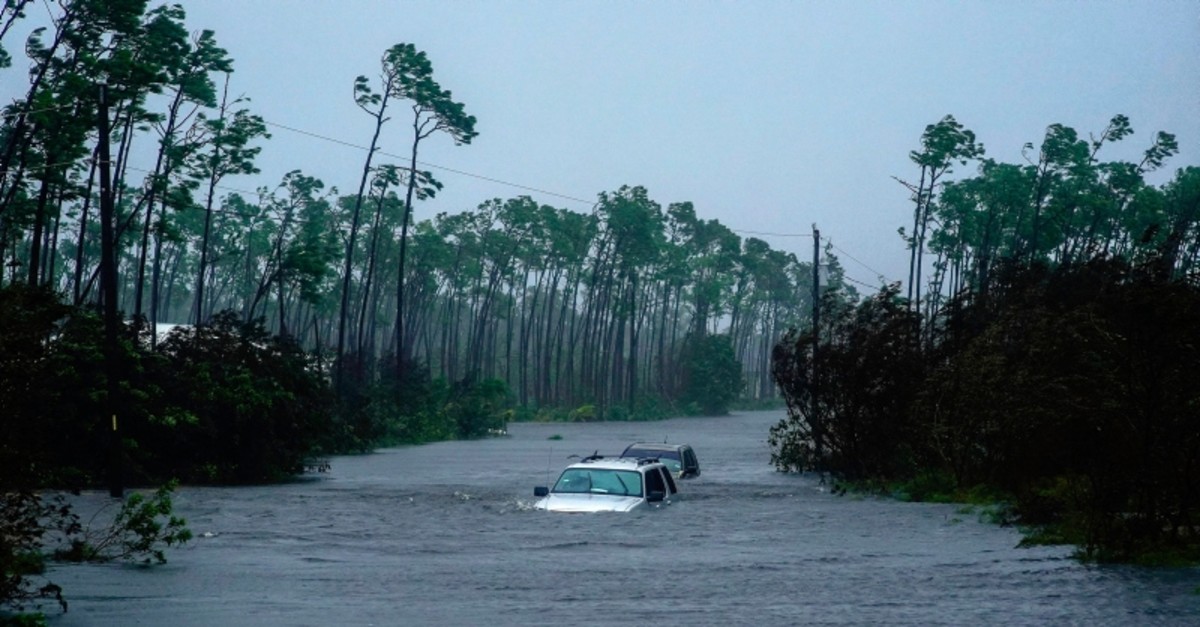 Hurricane Dorian crept towards the southeast coast of the United States on Tuesday, weakening slightly but remaining a dangerous storm after leaving a trail of death and destruction in the Bahamas.

Practically parking over the Bahamas for a day and a half, Dorian pounded away at the islands in a watery onslaught that devastated thousands of homes, trapped people in attics and crippled hospitals. At least five deaths were reported, with the full extent of the damage far from clear.

The United Nations and the International Red Cross began mobilizing to deal with the unfolding humanitarian crisis. Prime Minister Hubert Minnis called it "a historic tragedy."

The storm's punishing winds and torrential rain battered the islands of Abaco and Grand Bahama, which have a combined population of about 70,000 and are known for their marinas, golf courses and all-inclusive resorts. The Grand Bahama airport was under 6 feet (2 meters) of water.

Desperate callers trying to find loved ones left messages with local radio stations as Health Minister Duane Sands said that Dorian devastated the health infrastructure in Grand Bahama island and that severe flooding rendered the main hospital there unusable. He said he hoped to send an advanced medical team soon to the Abaco islands.

"We will confirm what the real situation is on the ground," he said. "We are hoping and praying that the loss of life is limited."

Red Cross spokesman Matthew Cochrane said more than 13,000 houses, or about 45% of the homes in Grand Bahama and Abaco, were believed to have been severely damaged or destroyed. U.N. officials said more than 60,000 people on the hard-hit islands will need food, and the Red Cross said some 62,000 will need clean drinking water.

The Red Cross authorized a half-million dollars to fund the first wave of assistance, Cochrane said.

Sands said the main hospital in Marsh Harbor in the Abaco islands was intact and sheltering 400 people but in need of food, water, medicine and surgical supplies. He said crews were trying to airlift five to seven kidney failure patients from Abaco who had not received dialysis since Friday.

To the south, the Bahamas' most populous island, New Providence, which is the site of the capital, Nassau, and has over a quarter-million people, suffered little damage.

Dorian's winds had dipped to 115 mph (177 kph), making it a Category 3 hurricane, down from a fearsome Category 5 when it struck.

The storm was centered about 45 miles (70 kilometers) north of Freeport and 105 miles (170 kilometers) east of Fort Pierce, Florida.

After standing still for nearly a day, it was on the move again, but just barely, pushing northwest at 2 mph (3 kph), or about as fast as a person walks. Hurricane-force winds extended up to 60 miles (95 kilometers) from its center.

NASA satellite imagery through Monday night showed spots in the Bahamas where Dorian had dumped as much as 35 inches (89 centimeters) of rain, said private meteorologist Ryan Maue.

Dorian was on track to approach the Florida coast later Tuesday, but the threat to the state eased significantly, with forecasters not expecting a direct hit after all. The forecast instead showed North Carolina in the crosshairs toward the end of the week.

As Labor Day weekend drew to a close, over 2 million people in Florida, Georgia and South Carolina were warned to evacuate for fear Dorian could bring life-threatening storm-surge flooding even if the hurricane's center stayed offshore, as forecast. Several large airports announced closings, and hundreds of flights were canceled.

The U.S. Coast Guard airlifted at least 21 people injured on Abaco Island, which Dorian hit on Sunday with sustained winds of 185 mph (295 kph) and gusts up to 220 mph (355 kph), a strength matched only by the Labor Day hurricane of 1935, before storms were given names.

Scientists say climate change generally has been fueling more powerful and wetter storms, and the only recorded hurricane more powerful than Dorian was Allen in 1980, with 190 mph (305 kph) winds, though it did not hit land at that strength.

Bahamian officials said they received a "tremendous" number of calls from people in flooded homes. One radio station said it got more than 2,000 distress messages, including reports of a 5-month-old baby stranded on a roof and a woman with six grandchildren who cut a hole in a roof to escape rising floodwaters. At least two designated storm shelters flooded.

Dorian was blamed for one death in Puerto Rico at the start of its path through the Caribbean.

In the Bahamas, choppy brown floodwaters reached roofs and the tops of palm trees. Parliament member Iram Lewis said he feared waters would keep rising and stranded people would lose contact with officials as their cellphone batteries died.

"It is scary," he said, adding that people were moving from one shelter to another as floodwaters kept surging. "We're definitely in dire straits."

Forecasters said that the storm had come to a near standstill because the steering currents in the atmosphere had collapsed, but that Dorian would resume moving later in the day, getting "dangerously close" to the Florida coast through Wednesday evening, very near the Georgia and South Carolina coasts Wednesday night and Thursday, and near or over the North Carolina shoreline late Thursday.

Meteorologist Daniel Brown cautioned that even "a small deviation" in its projected track could take the storm toward land.

Walt Disney World in Orlando planned to close in the afternoon, and SeaWorld shut down.

In South Carolina, Interstate 26 was turned into a one-way evacuation route away from Charleston on the coast, and Georgia Gov. Brian Kemp likewise planned to reverse lanes on I-16 on Tuesday to speed the flow of traffic away from the danger zone.