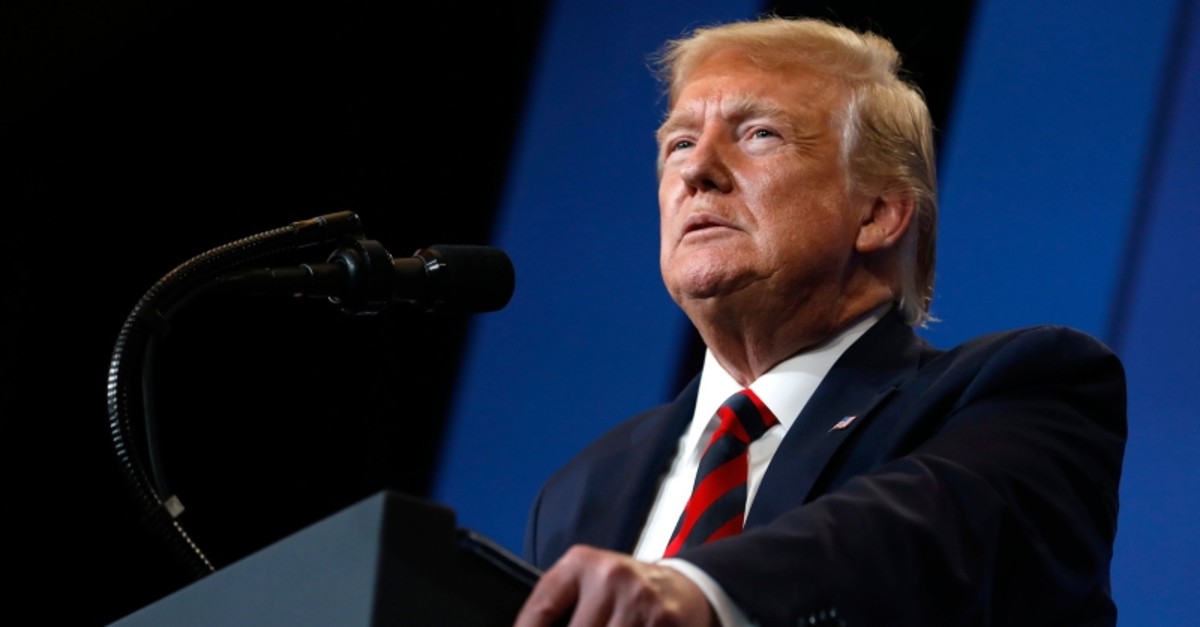 President Donald Trump speaks at the 2019 House Republican Conference Member Retreat Dinner in Baltimore, Thursday, Sept. 12, 2019. (AP Photo)
by Associated Press Sep 16, 2019 10:41 am
Tensions are flaring in the Persian Gulf after President Donald Trump said the U.S. is "locked and loaded" to respond to a weekend drone assault on Saudi Arabia's energy infrastructure that his aides blamed on Iran.

The attack, which halved the kingdom's oil production and sent crude prices spiking, led Trump to authorize the release of U.S. strategic reserves should they be necessary to stabilize markets.

The tweets Sunday followed a National Security Council meeting at the White House and hours after U.S. officials offered what they said was proof that the attack was inconsistent with claims of responsibility by Yemen's Iran-backed Houthi rebels and instead pointed the finger directly at Tehran.

A U.S. official said all options, including a military response, were on the table, but added that no decisions had been made. The official spoke on the condition of anonymity to discuss the internal deliberations.

Iran called the U.S. claims "maximum lies" and threatened American forces in the region. The attack dimmed hopes for potential nuclear talks between Trump and Iranian President Hassan Rouhani at the U.N. General Assembly this week.

Iraq denied that its territory was used for an attack on the kingdom. U.S. officials said a strike from there would be a violation of Iraq's sovereignty.

The U.S. officials said additional devices, which apparently didn't reach their targets, were recovered northwest of the facilities and are being jointly analyzed by Saudi and American intelligence. The officials, who spoke on condition of anonymity to discuss intelligence matters, did not address whether the drone could have been fired from Yemen, then taken a round-about path, but did not explicitly rule it out. 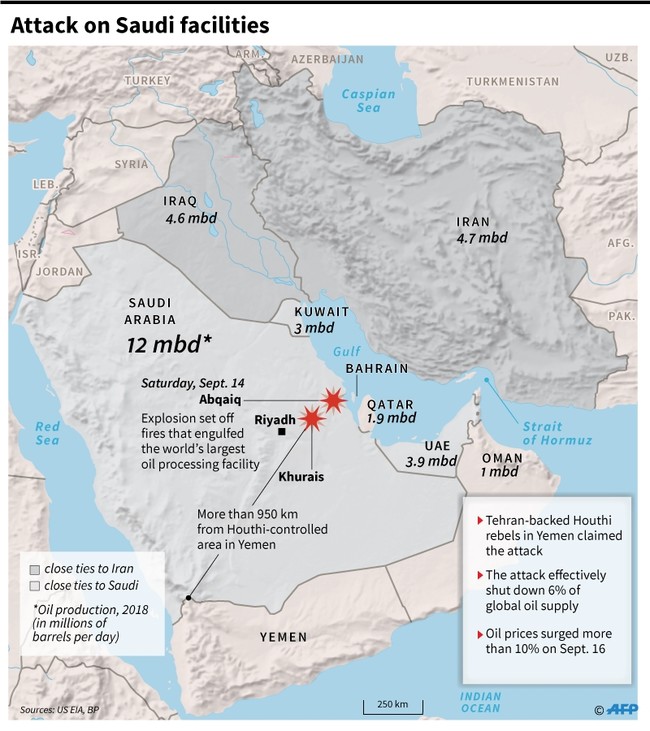 The attacks and recriminations are increasing already heightened fears of an escalation in the region, after a prominent U.S. senator suggested striking Iranian oil refineries in response to the assault, and Iran warned of the potential of more violence.

"Because of the tension and sensitive situation, our region is like a powder keg," said Iranian Brig. Gen. Amir Ali Hajizadeh. "When these contacts come too close, when forces come into contact with one another, it is possible a conflict happens because of a misunderstanding."

Actions on any side could break into the open a twilight war that's been raging just below the surface of the wider Persian Gulf in recent months. Already, there have been mysterious attacks on oil tankers that America blames on Tehran, at least one suspected Israeli strike on Shiite forces in Iraq, and Iran shooting down a U.S. military surveillance drone.

The attack Saturday on Saudi Arabia's Abqaiq plant and its Khurais oil field led to the interruption of an estimated 5.7 million barrels of the kingdom's crude oil production per day, equivalent to more than 5% of the world's daily supply. It remains unclear how King Salman and his assertive son, Crown Prince Mohammed bin Salman, will respond to an attack targeting the heart of the Saudi oil industry.

Saudi Arabia has promised to fill in the cut in production with its reserves, but has not said how long it will take to repair the damage. The Wall Street Journal cited Saudi officials as saying a third of output would be restored on Monday, but a return to full production may take weeks.

In Washington, Trump said he had approved the release of U.S. strategic petroleum reserves "if needed" to stabilize energy markets. The president said the final amount of the release, if any, would be "sufficient to keep the markets well-supplied."

"The Americans adopted the 'maximum pressure' policy against Iran, which, due to its failure, is leaning toward 'maximum lies,'" Mousavi said in a statement.

Houthi leader Muhammad al-Bukhaiti reiterated his group's claim of responsibility, telling The Associated Press it exploited "vulnerabilities" in Saudi air defenses to strike the targets. He did not elaborate.

Iran, meanwhile, kept up its own threats. Hajizadeh, the brigadier general who leads the country's aerospace program, said in an interview published across Iranian media Sunday that Revolutionary Guard forces were ready for a counterattack if America responded, naming the Al-Udeid Air Base in Qatar and Al-Dhafra Air Base near Abu Dhabi in the United Arab Emirates as immediate targets, as well as U.S. Navy ships in the Persian Gulf and the Arabian Sea.

"Wherever they are, it only takes one spark and we hit their vessels, their air bases, their troops," he said in a video published online with English subtitles.

Trump insisted that unspecified conditions must be met before he would sit down with the Iranian leader, apparently rejecting the comments of two top advisers.

"The Fake News is saying that I am willing to meet with Iran, 'No Conditions.' That is an incorrect statement (as usual!)." In fact, Treasury Secretary Steven Mnuchin said last week that "the president has said that he is prepared to meet with no conditions." And Pompeo had told reporters days earlier that "the President has made clear he is happy to take a meeting with no preconditions."

Iran has said it was unwilling to meet with Trump while crushing sanctions the American leader imposed on Tehran after unilaterally withdrawing from the 2015 nuclear accord over a year ago remain in place.