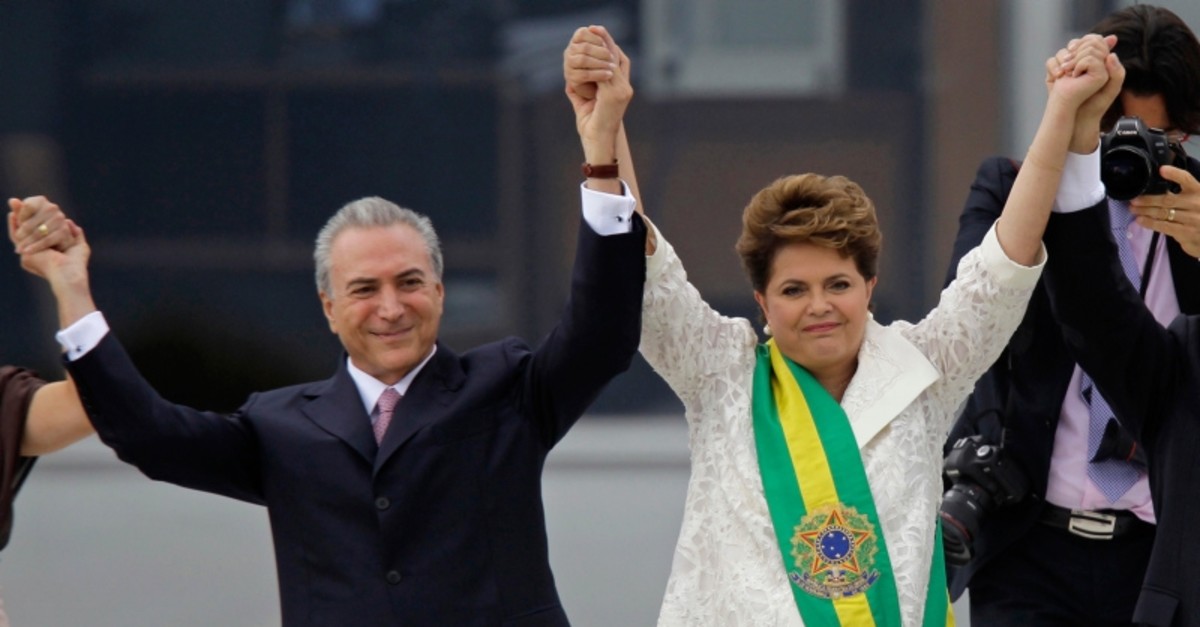 In this Jan. 1, 2011 file photo, Brazil's President Dilma Rousseff, right, raises arms with her Vice President Michel Temer at the end of her swearing-in ceremony at Planalto Palace in Brasilia, Brazil. (AP Photo)
by Compiled from Wire Services Sep 18, 2019 11:58 am

Former President Michel Temer has surprised Brazilians by referring to the impeachment of his predecessor, Dilma Rousseff, as a "coup" for the first time.

Temer said on TV Cultura Monday night that he had "never supported or made a commitment to the coup" and had even tried to stop it.

Rousseff's backers have long called her ouster through a Senate vote on August 31, 2016 a "coup" while her foes insisted it was a justified impeachment vote to oust her.

Rousseff has said the impeachment was a maneuver by political rivals to get into power after more than a decade of leftist Workers' Party (PT) rule.

She was accused of improperly manipulating the budget and was replaced by then-Vice President Temer, whose Brazilian Democratic Movement Party (PMDB) played a key role in Rousseff's ouster. Temer then ruled the country for 28 months before handing over the post to far-right Jair Bolsonaro.

Rousseff did not lose time to slam Temer after he tried to whitewash his role in the coup process.

After informing her followers on Twitter about the coup confession by former president, Rousseff said: "Temer did not say, however, that the 2016 coup was to frame Brazil in neoliberalism. And of course Temer denied having directly participated in the coup."

Rousseff also said Temer did not mention his closest assistants Moreira Franco and Elisha Padilha, who are still being tried for establishing a criminal organization with Temer and obstructing justice. The Federal Prosecution Office also accuses Franco and Padilha for joining a corruption ring in the Chamber of Deputies to cash in by using public institutions.

Temer himself has been charged many times in connection with various corruption investigations and was jailed for five days in March.

The PT ruled Brazil from 2002 until 2016 when Rousseff, the first female president of Brazil and a long-time comrade of former Brazilian President Luiz Inacio Lula Da Silva, was removed from office through impeachment two years into her second term.

Both Lula and Rousseff have called what has been going on in Brazil since 2016 impeachment a coup against elected leaders.