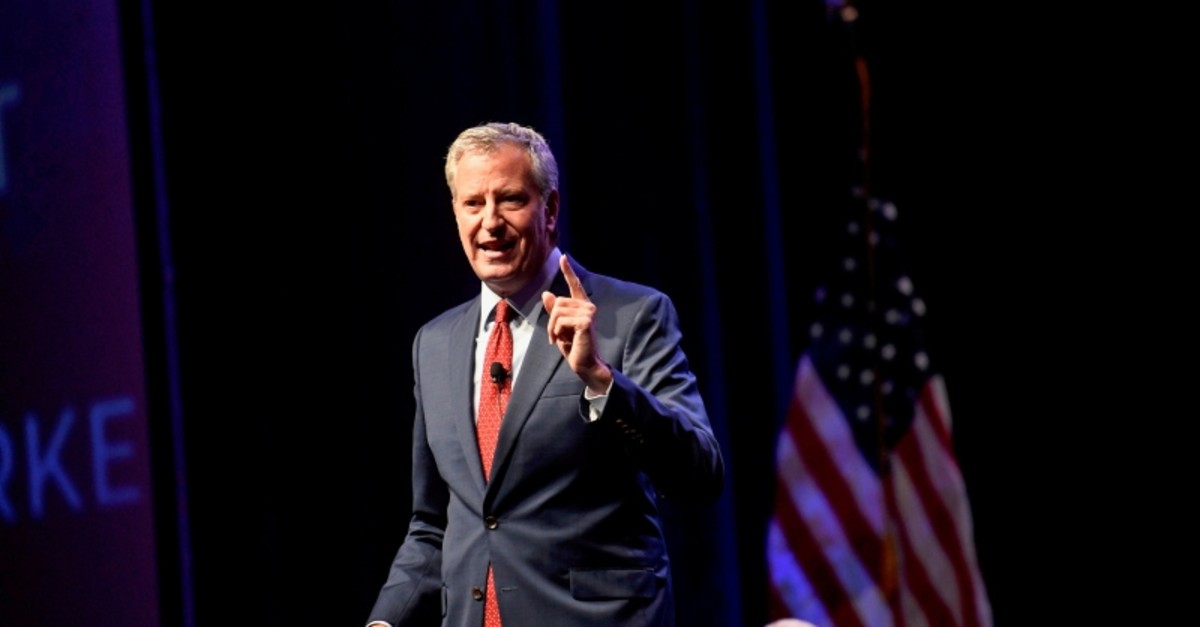 New York City Mayor Bill de Blasio ended his campaign for the 2020 Democratic presidential nomination on Friday after struggling to gain traction in a sprawling field of candidates.

Announcing his decision in an MSNBC interview, de Blasio did not throw his support behind any candidate but said he would support the eventual Democratic nominee "with energy."

"I feel like I've contributed all I can to this primary election, and it's clearly not my time," de Blasio told the hosts of "Morning Joe." ''So I'm going to end my presidential campaign, continue my work as mayor of New York City, and I'm going to keep speaking up for working people and for a Democratic Party that stands for working people."

President Donald Trump, no fan of de Blasio, tweeted : "Oh no, really big political news, perhaps the biggest story in years! Part time Mayor of New York City, @BilldeBlasio, who was polling at a solid ZERO but had tremendous room for growth, has shocking dropped out of the Presidential race. NYC is devastated, he's coming home!"

De Blasio launched his bid in May but his campaign largely failed to take off. He never achieved higher than 1% in a national poll and was ridiculed in the media, most recently in a Washington Post story headlined "Bill de Blasio's presidential campaign has burned down, fallen over and sunk into a swamp."

He qualified for the first two rounds of debates but failed to make the September debate stage and appeared unlikely to qualify for the October debates.

De Blasio struggled to achieve the breakout moment he needed to stand out in the crowded Democratic field. After a strong performance in the first round of debates in June he flubbed a campaign appearance in Miami by quoting Che Guevara. De Blasio said he did not know that the slogan "Hasta la victoria siempre!" was associated with Guevara, a leader of the Cuban Revolution who is reviled by much of Miami's Cuban population.

De Blasio boasted of his administration's record on police reform but was followed around on the campaign trail both by protesters from the city's largest police union and by hecklers demanding that he fire the officers involved in the 2014 death of Eric Garner on Staten Island.

The protests did not end after the Aug. 19 firing of Officer Daniel Pantaleo, who placed Garner in the chokehold that contributed to his death. An activist attending de Blasio's Aug. 25 CNN town hall shouted, "What about Lieutenant Bannon? What about Officer Ramos? ... What about other officers?" referring to officers who were also present during Garner's arrest.

The mayor had announced his presidential run by heading to the Statue of Liberty, where he said the country is in an "identity crisis" around immigration, which he called "the founding and unifying element of the American experience."

"We are figuring out who we are," he said then. "There are American values we need to return to and fight for in order to achieve our greatest potential."

On his campaign's first day, he dived into an insult match with Trump.

Trump tweeted at the time that de Blasio was "considered the worst mayor in the U.S."

The Republican president said, "He is a JOKE, but if you like high taxes & crime, he's your man. NYC HATES HIM!"

When de Blasio took office in 2014, he seemed briefly poised to become a leading voice for an emerging left wing of the Democratic Party. His central message was fighting income inequality, a theme he hit in the video announcing his presidential candidacy.

But liberals' enthusiasm for de Blasio faded during his first term as mayor, partly because of political missteps at home and the emergence of bigger names elsewhere.