At least 13 officers killed by gunmen in Mexico 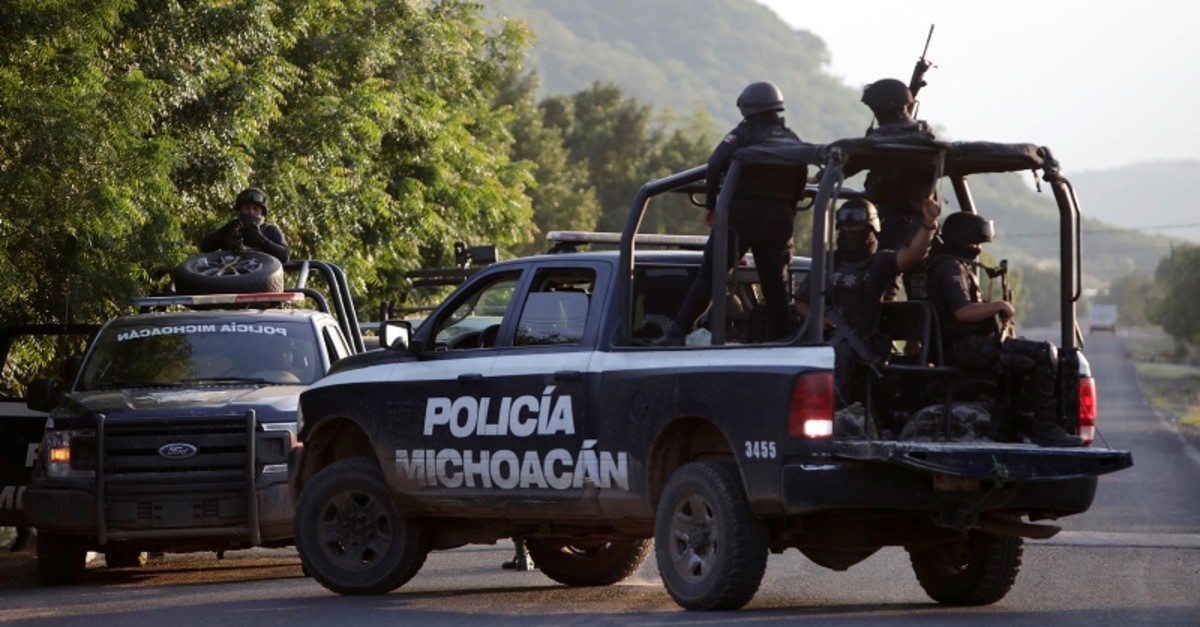 Security forces patrol along a road after police officers were killed during an ambush by suspected cartel hitmen in El Aguaje, in Michoacan state, Mexico October 14, 2019. (Reuters)
by Associated Press Oct 15, 2019 2:12 pm

Gunmen ambushed a police convoy on Monday in the Mexican state of Michoacan, killing at least 13 police officers and wounding nine others.

The state police officers had gone to a home in the town of El Aguaje in Aguililla municipality to enforce a judicial order when "several armed civilians fired on them," Michoacan's state security department said in a statement.

"No attack on the police will go unpunished, and this was a cowardly, devious attack because they laid an ambush in this area of the road," Gov. Silvano Aureoles said.

Images published in Mexican media showed vehicles burning in the middle of a highway and messages apparently signed by Jalisco New Generation, one of Mexico's most powerful and rising cartels at the moment. Aureoles said their authenticity was under investigation.

In the afternoon, an Associated Press journalist saw two gutted patrol cars at the entrance to El Aguaje surrounded by hundreds of bullet casings. Two police trucks were towed away.

The streets were nearly devoid of human activity as people apparently decided to stay indoors after the violent events.

After the attack, the area in western Mexico's so-called "hot lands" was reinforced by federal and state security forces, who set up checkpoints to find the assailants.

Michoacan, an important avocado-growing state, has recently has seen a jump in violence that has brought back memories of the bloodiest days of Mexico's war on drug cartels between 2006 and 2012.

In August, police found 19 bodies in the town of Uruapan, including nine hung from a bridge. Later, an area roughly 45 miles (70 kilometers) north of Aguililla was the scene of fierce clashes between members of Jalisco New Generation and regional self-defense groups.

In 2013, civilian groups faced with what they said was state inaction armed themselves in Michoacan to fight the Knights Templar cartel, one of whose bases was Aguililla. They said they took up arms to defend themselves from kidnappings, extortion and killings by cartels. But some of the self-defense or vigilante groups later became infiltrated by cartels and gangs.

The government of former President Enrique Peña Nieto launched a process to disarm and legalize the vigilante groups and incorporate them into official security forces.

Aureoles, the governor, says the self-defense groups haven't returned and has criticized federal authorities for not attacking drug cartels in Michoacan with sufficient force and for negotiating with vigilante groups he refers to as criminals.

Besides avocado orchards, Michoacan for decades has been known for marijuana plantations and the making of methamphetamine. It is home to the port of Lázaro Cárdenas, a key entry point for precursor chemicals used to make synthetic drugs.