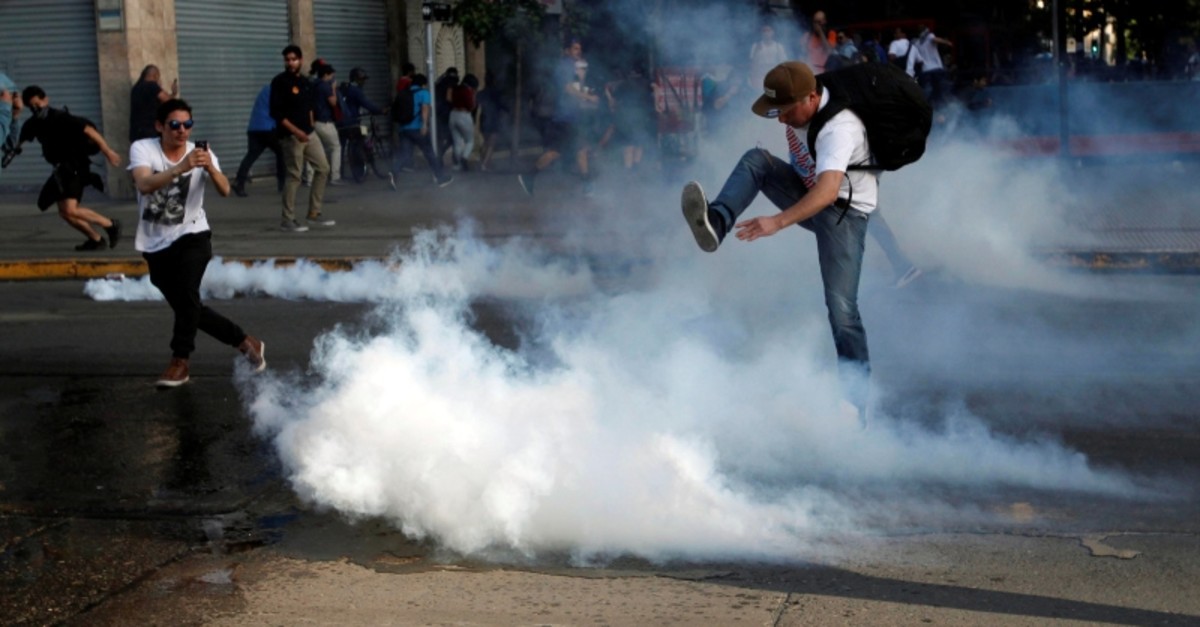 A state of emergency has been declared in Chile's capital Santiago after demonstrations against a rise in metro fares turned into act of violence, Chile's President Sebastian Pinera told reporters Saturday.

Chile's president declared a state of emergency in Santiago Friday night and gave the military responsibility for security after a day of violent protests over an increase in the price of metro tickets.

Throughout Friday, protestors clashed with riot police in several parts of the capital and the subway system was shut after attacks on stations in some of the worst violence the city has seen in years.

At least 16 buses were torched and a dozen metro stations totally destroyed.

"The objective of this state of emergency is very simple but very profound: to ensure public order and peace for the inhabitants of Santiago," Pinera said in a statement.

The state of emergency is initially for 15 days and restricts freedom of movement and assembly. Due to the emergency, the National Football Association has suspended matches this weekend.

General Iturriaga said the military would patrol major trouble spots in the city of seven million but would not impose a curfew at present.

"We are not going to restrict any personal freedom for now," he said.

Violent clashes escalated as night fell and the headquarters of the ENEL Chile power company and a Banco Chile branch, both in the city center, were set on fire and several metro stations hit with Molotov cocktails. The ENEL tower blaze was put out with no one injured, firefighters said.

Barricades were erected in several parts of the city and masked protestors armed with sticks and stones clashed with riot police, who repelled them with water cannon and tear gas.

Residents in many districts of Santiago banged their pots in a show of support for the protestors.

The unrest started as a fare-dodging protest mainly by students against the hike in metro ticket prices, which increased from 800 to 830 peso ($1.13 to $1.17) for peak-hour travel, following a 20 peso rise in January.

The fare hike was blamed on rising oil prices and a weaker peso.

There had been several fare-dodging actions in recent days, organized on social media, but the protests escalated Friday, tapping into general discontent among many Chileans amid an economic slowdown and calls for reforms to labor and tax laws and the pension system.

Attacks on metro stations forced the closure of the entire subway system -- the key form of public transport in the congested and polluted city, carrying three million passengers a day.

"The entire network is closed due to riots and destruction that prevent the minimum security conditions for passengers and workers," the metro operator said on Twitter, after attacks against nearly all the 164 stations where many gates and turnstiles were destroyed.

The Santiago Metro, at 140 kilometers (90 miles) the largest and most modern in South America, is expected to remain closed this weekend and could reopen gradually next week.

Closure of the metro forced many Santiago residents to walk home, sometimes long distances, resulting in scenes of chaos.

Pinera slammed the protestors as criminals.

"This desire to break everything is not a protest, it's criminal," he said in a radio interview.