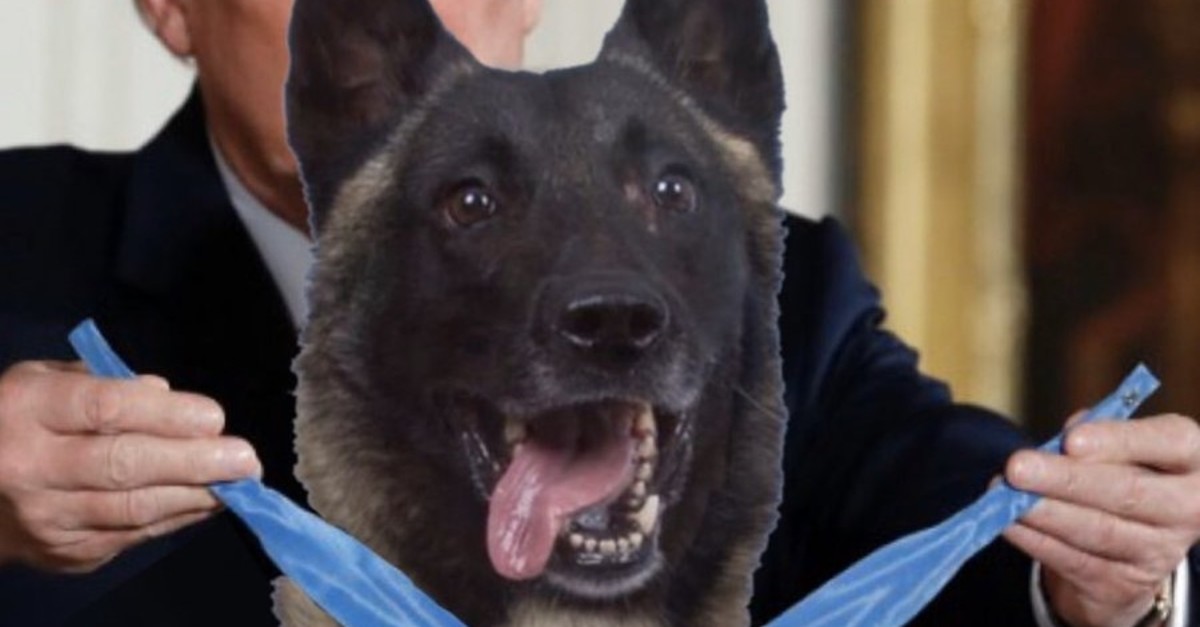 U.S. President Donald Trump shared Wednesday an apparent fake photograph of himself awarding a medal to the dog who chased Daesh chief Abu Bakr al-Baghdadi in his final moments.

The image, which appears to be a modified version of an Associated Press photo from a 2017 Medal of Honor ceremony, bears a watermark from the conservative Daily Wire news website.

U.S. officials have declined to identify the dog by name, but Newsweek reported the German Shepherd's name is Conan.

In announcing al-Baghdadi's killing, Trump said Sunday that the Daesh leader attempted to escape via a tunnel that ultimately was a dead-end, taking three young children with him "to certain death."

But as U.S. forces led by a canine closed in, al-Baghdadi killed himself and took the lives of the children as the tunnel caved in around him following the explosion.

Trump hailed the dog as "beautiful" and "talented," adding "the dog was so great."

Trump said earlier Monday before departing Washington for Chicago that he is considering releasing video of the special forces mission, and Joint Chiefs Chairman Mark Milley added that while the U.S. does possess photos and videos of the raid they are currently undergoing a declassification process.

"I think what you'll see here in the coming days is we'll set up some operation and tactical-level briefings by Central Command and you'll be provided some video and photos, etc. of that," he said.

Milley confirmed the dog was "slightly wounded" during the operation, but is expected to fully recover from the injuries that were sustained.

"The dog is still in theater. The dog, the K-9, the military working dog, performed a tremendous service, as they all do in a variety of situations," said Milley.

Under al-Baghdadi, Daesh spread over wide segments of Iraq and Syria beginning in 2013, eventually claiming the formation of a "caliphate" in the region as it plotted and carried out gruesome attacks that reached far beyond its main territorial bastion. It further set up local affiliates in other regions as it released heinous execution videos on to the internet.

Al-Baghdadi had been a top target for the Trump and Obama administrations and had a $25 million bounty placed on his head.

As the U.S.-led coalition took back territories once under the terror group's hold, al-Baghdadi increasingly stayed in the shadows, only rarely releasing pre-recorded audio messages to his followers.